Help me decide what to put in my 20 long endler tank...

Planted, with male and female endlers. Some are pretty but it's too monotonous for me. I want to add another individual/small group. Here's what I'm thinking...

Options I've considered:
Dwarf gourami. I'm not particularly drawn to them but they can look cool.
Molly's. Not captivated by how they look but I think they'd co-habitate appropriately and probably keep the tank a little cleaner too. I really don't know what they're like though.
or...
Betta Channoides / Albimarginata... Part of me wants to breed wild bettas... I understand what this would look like, and was told that these would be good starters. Question is, would they be a bad choice to keep in this tank? I do think they have an interesting look and behavior, but that's assuming they'd work. I would move the light to the other side of the tank and make them some dark hiding spaces.

Open to other suggestions! What would you all do?

My honey gouramis do a great job at keeping my guppy population down. They have the cutest personality especially if you get a trio 1m/2f. The only thing with bettas is they could be aggressive and also the endlers could nip fins if they are long enough. But they would also do a good job at eating some of the fry as long as they can swim fast enough.
OP
O

Honey gouramis have just never caught my eye. They're dynamic to watch though?

Oh yah, the females chase each other while the male tries to woo them. They change colors and get dark patches during "breeding" periods. They are always swimming around doing something. Here's a vid of mine chasing around the fry the other night. 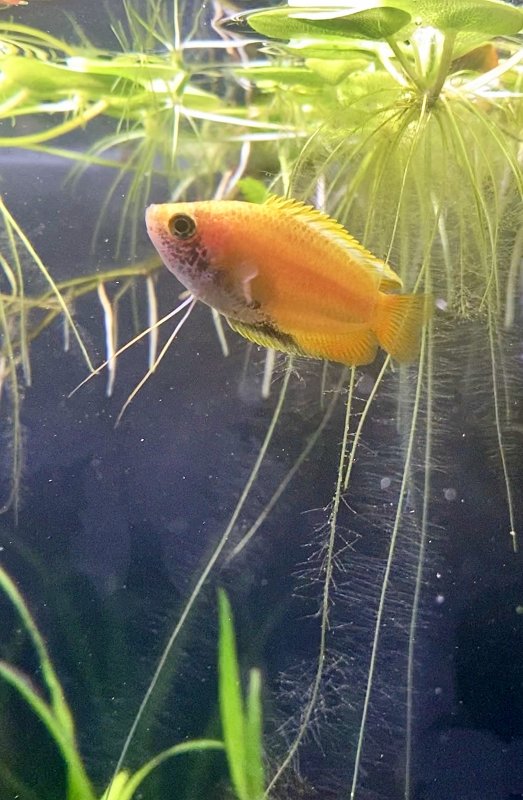 Also they are much more peaceful than Dwarf Gouramis.

I'm just going to put my experience here. My Dwarf gourami killed 4 of my neons and someone else on this forum had their's kill neons too. Endlers, especially the males, are similar in size compared to neons. I think you know where I'm going with this. I could have just had bad luck though. I have a female betta with my normal guppies and she will occasionally flare at them but never attack. She also has killed every fry that has been born in that tank.
OP
O

My female betta, who I just moved to a solo tank and love, was overwhelmed by the school. She tried to establish some territory at first and probably did snack on a few fry, but eventually she just hid on top of some floating plants and was suffering. So I'd rather not risk it with another betta I don't have room for elsewhere. Good to know that dwarf gaurami's are too aggressive.

Kattiq, are those full grown honey's, looking about the size of the guppies? I thought the got bigger.

Yes they are full grown. They are one of the smaller species. They are wider than guppies but about the same length. How many endlers do you have? And depending on filtration and stuff you could probably handle a trio. My females usually swim together everywhere.
You must log in or register to reply here.
Share:
Facebook Twitter Reddit Pinterest WhatsApp Email Link