About a month ago, i bought a female betta fish from my LFS. i was only planning to buy a sand substrate and filter pads for my goldfish pond, but when i saw those tiny little colorful bettas, i decided to get one. I was planning to put him in my 4 years old 4 gallon tank while going home and after i got home i immediately clean the tank and the sand of course. Put the sand in, place the decoration and waa-lah... A fish tank. Shortly after i named him "Marley Victoria" from my weird sense of humor. didnt know anything about nitrogen cycle and the betta doing pretty well before going to larger tank because i think i always perform 100% water change so no ammonia were left (correct me if im wrong) 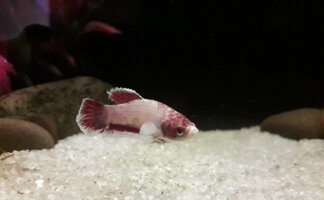 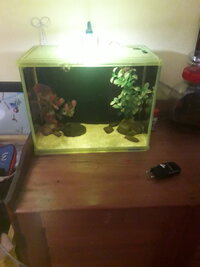 The first picture is heathly marley and the second is her tank.
after 2 weeks i decided to buy hang-on filter online because i hate seeing those dust after water change. The filter works pretty well and actually remove those dust. After a long, long, longgggg time watching him grow, i feel like the tank its finally too small for him. You know, i always watch those betta videos where they keep them in pretty large, highly planted, and beautiful aquariums, just thinking how happy marley will be in those tanks. I cant buy a large aquarium like those on youtube because yes. Im just a 14 year old boy who cant make that much money to buy one. I did try to borrow one of my neighbour unused 13 gallon tank but.. im too shy to ask lol. I did a horrible thing to him when i was younger like punching her banana tree..... seriously.
Anyways.. after the failure attempt, i gave up and try to save money to buy larger tanks.
My dad really understand im intrested on fish keeping so.. lucky me! She asked her friends unused 15 gallon tank and she got it! Originally, it was said to be used on a clownfish. Yes, nemo. Which is pretty terrible. I insist and clean the tank at night, fill it up to check if its leaked. After that, i placed it near marley tank. And i was researching about platys because i was gonna give marley a tank mate, on night, me and my mother bought 4 platy, 1 plastic plants, and some sand substrates from LFS. cleaned the sand as usual, place the decoration, fill up, and brand new tank. The next day, i introduced marley to the new tank and it went pretty.. pretty bad. Marley fins was bitten by one of the platy so i removed all the platys to the goldfish pond and marley was alone again. But thats alright, she wont get bored in large space right? The next day i put all the remaining decorations from the previous tank into the new tank. It went pretty well. 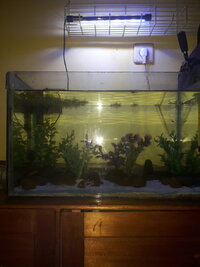 This is the current tank. Its filtered and no heater because i live in southeast asia (the aquarium temperature is 30C°! Which is maximum for betta fish) still no knowledge about nitrogen cycle.
Two month has passed and marley got its first disease. Ich. So i have a problem back then, because the previous tank should be used as hospital tank right? Sadly, i gave the tank away to my friend betta. So, i have no choice but to treat it on her main tank. I used meth blue and changed the water as usual 50% every week. It only took 5 days for him to recover. Lucky!
After the recovery, i fully fill the tank again and no more meth blue. But bad things happen again. Marley got ANOTHER disease and its fin rot this time...
In first, i didnt believe it was any kind of disease because its a hole on her fin. I have a pointy fake plants so i removed it and see if it healed. It has a black stripes near the hole on her fin. Day after day, her fin is getting worse so.. again treatment on main tank. This is the current situation im in. So i do 50 % water change every 3 day in order to make sure the ammonia is low and wont be toxic. So, i believe it was all because uncycled tank. But i dont know how to cycle the tank now because i dont have any other established tank. I live in indonesia, where the aquarium product are not complete. So yeah, there are no such thing as tetra safestart, prime seachem, even test kits! I try to search those things online and mostly of them came from other country, and its sooooo expensive! I have another unused livestock aquarium that is pretty green and old. It contain mosquito larvae, seed shrimp, and algaes. Do you think it contain some of those beneficial bacteria? Should i pour some of the water in my tank?
So heres my plan if marley recovered from fin rot. A dangerous Fish In Cycle:
Since there are no test kits in my LFS even online store, im gonna clear the meth blue, put in the indian almond leaves, and 50 percent water change every 3 day. Repeating the same thing for 5 MONTH.
The reason why i need indian almond leaf is to protect marley from any kind of disease so i wont need to add meth blue again which kill the beneficial bacteria too. IAL have antifungal, bacterial properties so i think its a pretty good idea even though it slow the cycling i would do everything for marley to be calm and not get disease again.
A 50 percent water change every 3 day is to remove a high level ammount of ammonia. I will left small amount of fish poop so the bacteria can eat and reproduce.
So.. what is your opinion? Is it great and safe to cycle it or bad and stupid?
I want you guys to be very clear about this and dont try to be a friendly dude because i really WANT to learn my lesson. I know im acting dramatic and childish but i REALLY LOVE my betta and i dont want him to die.
(Sorry for the bad grammar. I dont speak english regulary).

I'm actually not sure, but I wanted to welcome you to Fishlore! This is a wonderful place. Ask as many questions as you have, should you have them
Upvote 0
You must log in or register to reply here.