Help! how to tell if my betta has finrot

Hi,
I've had a beautiful male betta for the past few months and he's been in really good health, has a lovely temperament, is all around a great fish. Previously, he had beautiful, full fins but following my going on holiday for a week, he's suddenly become ill. I hadn't noticed prior to this trip any damage to his fins at all so was devastated when I returned home (this was a little over a week ago) His behaviour is exactly the same, but his tail and top fin look shredded. I became concerned he had fin rot, so addressed the tank water, doing water changes for a week and treating him with an anti-fungal treatment that I bought from my local fish store. I did the treatment and water changes for a week but haven't noticed any real improvements to his physical state. However, he's become more active and bright in recent days, which is hopeful.
However, I am now becoming doubtful that it is fin rot he suffers with. He shares his 20L tank with two small (around an inch) loach who don't seem to bother him much - I've never seen them interact. But I'm not ruling out that they may have attacked him. In terms of decor, I have live plants and driftwood, plus a large rock which I've now removed due to being suspicious that he may have shredded his fins on this, as it is fairly rough. Finally, I have caught him once recently biting at his fins and this is why I'm now worried that he may actually be biting his own fins and not suffering from fin rot!! If anyone could give me any advice on what might be going on, I'd be so grateful! Especially if you could provide some solutions so that he can heal and return to his previous healthy state. i've attached pictures of him below 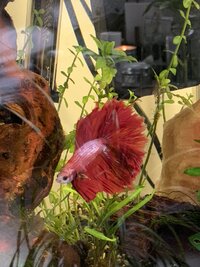 this is him usually, in his healthy state 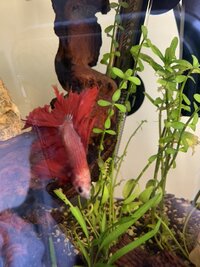 this is the current state of his fins

Finrot usually has a bit of black or brown coloration along the edges. Can't really tell in that photo though if it is finrot, fin-nipping or the tail been getting caught on stuff.
Upvote 0
You must log in or register to reply here.

Help With Tail Rot in Betta

What are you doing to your tank today?