Help, bloated betta swimming on side

Hello I need help my betta fish is swimming on his side and his belly is bloated.....but also his fins are shredded I don’t have much money to buy anything so if you guys can find natural products from home....

here is a picture of him 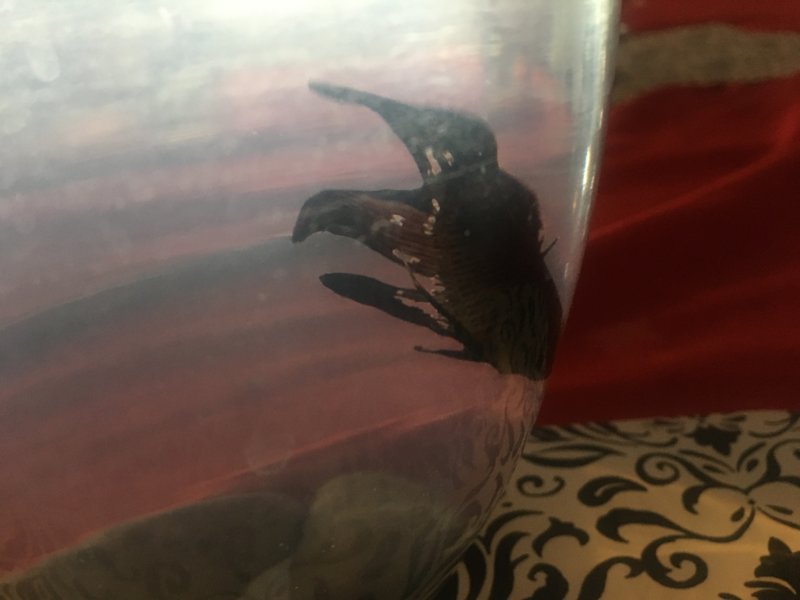 Oh dear he really isn't in good shape- I fear he may not live much longer even if drastic measures are taken.

For right now I would suggest doing a full 100% water change- make sure the water is the same temperature as his current home. It looks like he has a nasty case of finrot as well as some swim bladder issues.

For starters- it looks like he is in a bowl. This is not suitable for a betta (or any fish!) Bettas need a minimum of 2.5 gallons but ideally at least 5. They also need a heater as they are tropical fish. A filter is also needed for the cycle to exist. I noticed your profile says you don't know about the nitrogen cycle. I would suggest looking into that asap as it is the most important thing when it comes to keeping any aquatic creatures.

Normally the bloating is from overeating and can be helped by fasting but with the addition of the finrot and colour loss I'm assuming that isn't the case here. If you look at him from above do his scales stick out like a pinecone?

Unfortunately there really aren't many (if any) "natural" products from home that could help. Fish are very delicate and need specialized products- especially if you're trying to treat diseases and such. It it possible to treat finrot by increasing water changes which is exactly what I would recommend right now.

Can you tell me a bit more about your fish? How long you've had him, what he eats, how often do you change his water and how much, what water conditioner you use, etc?

Above information is excellent! Do the large water change and fast him. No food at all for a couple of days. Get some epsom salt to give him baths with. The epsom salt will pull off fluid, reduce stress, and help with gill function to be sure he’s getting good oxygen supply. Make sure epsom salt has no fragrances, just plain epsom salt. Take a gallon size bowl and add dechlorinated Water that is the same temp as his bowl. Then add 1 teaspoon of epsom salt stir it well to dissolve it. Place fish in it for 10 minutes then put him back in his bowl. You can do this 3 times a day if he is tolerating it. After 2-3 days of fasting, offer him a blanched, deshelled pea to eat. Keep us posted!
OP
A

Hello
We’ve had Alex since July 2019
I’ve gotten some medication for him (see picture below)
And that isn’t his tank he used to live there but now he lives in a 3.5 gallon tank by himself ( I bought it in December but put him in there January)
The temperature of the water is at 70 (see picture below)
I’ll take your advice about nitrate cycle And do my research
As for him swimming on his side he’s stopped since he’s taken a poo (there was so much)
His colour seems to have returned ( I don’t if it’s because of the colour of the tablet I put in the tank but he seems to be swimming and acting like his normal playful self) 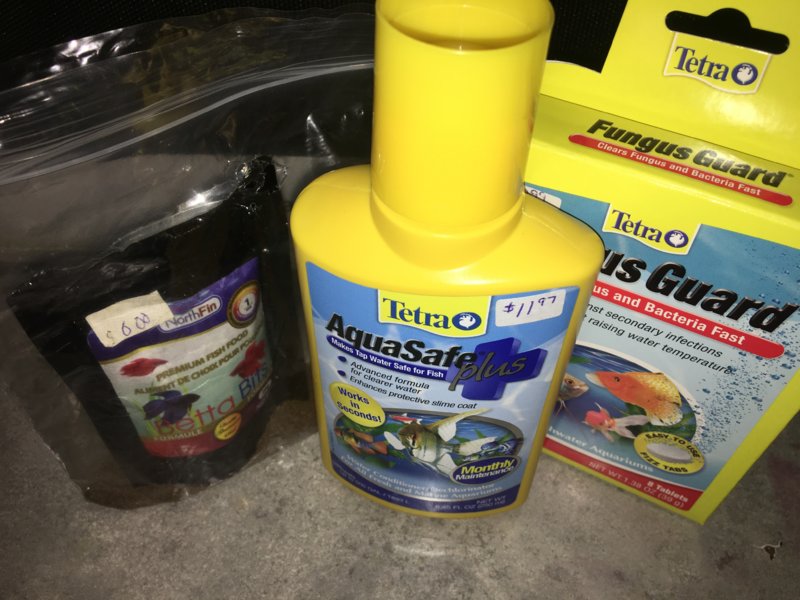 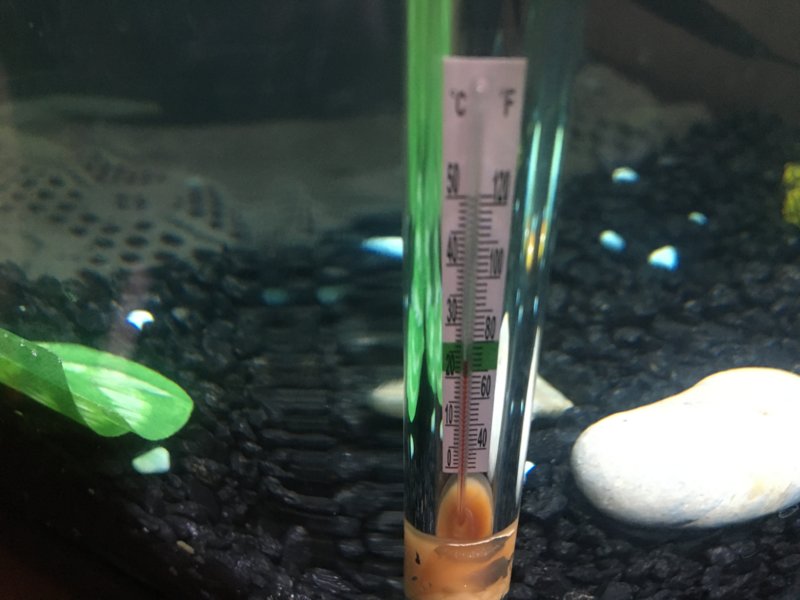 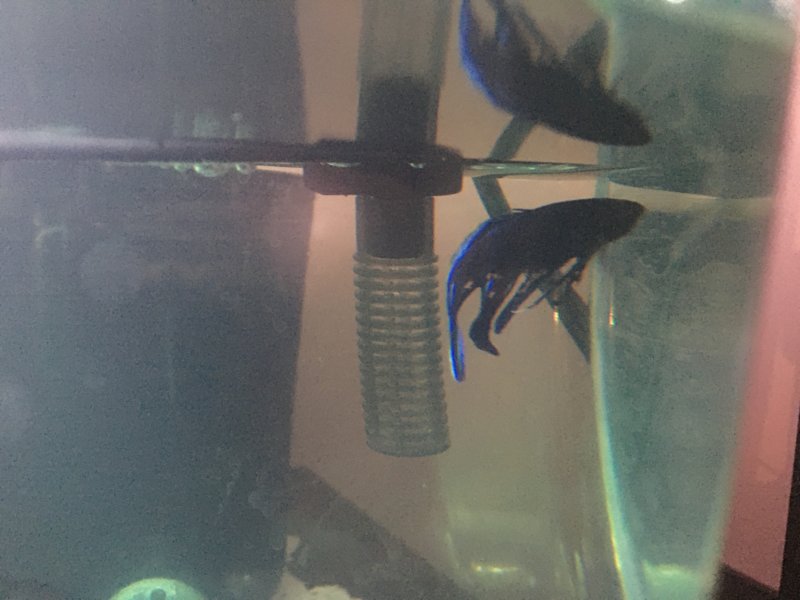 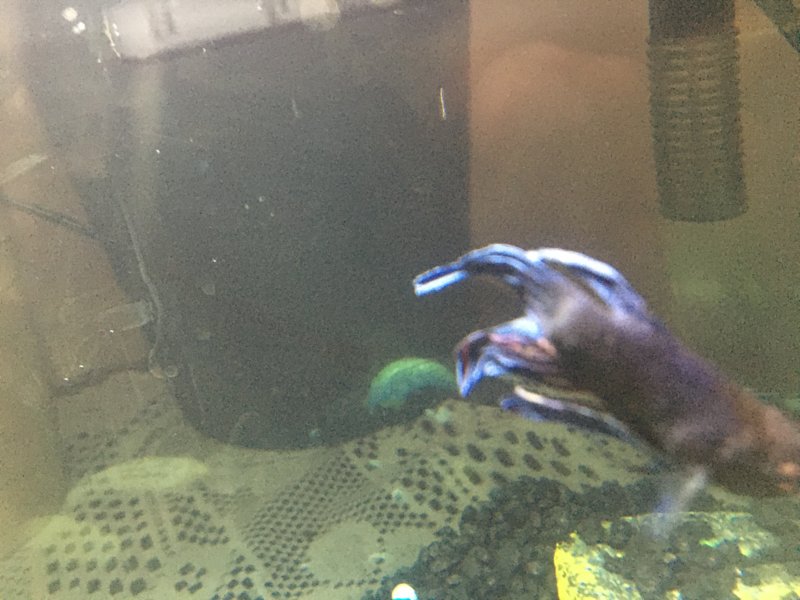 I only used half of the capsule and I was wondering when I should use the other half...... I really don’t wanna lose him

The water conditioner you have is perfectly fine, and if he's been in there since December then the tank is likely at least partially cycled if not completely. The temperature looks good as well.

Seeing as his bloat has gone down and his behaviour has returned to normal I believe he is doing really well.

I'm not sure on the exact instructions for that medication but it should say when you can re-dose if needed. For now I would make sure to monitor his fins and do about a 50% water change every 3 days or so to see if it improves at all.
OP
A