HI again! I’m realizing I only seem to come on here when something bad is going on (except when I just asked about identifying a couple cichlids).

So I switching to a completely Mbuna African cichclid tank several months ago and it has been one of the BEST decisions I’ve ever made. I moved my few remaining South American cichlids to a different tank when I decided to quit trying to keep them. They were impossible to keep alive no matter what I did for them. Anyway, they are somehow doing amazing now and even bred for their first time!

Anywho, not the reason of this post, reason is, when I quit South American cichlids and thought I was going to sell EVERYTHING fish related and my 75 gallon tank. Then after many craigslist no-shows, I decided “I’m going to do Mbuna cichlids” as they seemed incredibly hardy. For many months now, maybe 5? 6 months? They have proven JUST THAT. They have been amazingly hardy. Until yesterday.

I have 4 yellow tail Acei. I’ve notice color changing the entire time I’ve had them, from deep blue to a beautiful vibrant blue, but over the past week maybe, I think (maybe I’m making it up in my head though), one has seemed to be not quite the right blue, some whitish blotches in scale color, but no fuzzies or bites or nipped fins. So I’ve left him alone. Eating normally and all. Until last night, I suddenly noticed commotion in the tank and saw two other cichlids harassing him and while I was getting a net and breeder box for in-tank isolation, I noticed him swimming upside down too. I caught him quickly (he wasn’t “easy” to catch, so not totally lifeless” but not giving me a full fight once I netted him and put him in the isolation container).

He immediately started having even more trouble swimming right side up. I surveyed his whole body, his coloring was horrible, blotched purple/blue and white, no fuzz.

I have a horrible time if I find any fish eaten to death or eaten after death so I figured I would let him “die with dignity” in the container instead of finding him in the morning with no eyes and picked apart.

Well this morning he looked horrible and dead. It looked as though is tail was completely infused with blood and he just looked worse and upside down, motionless. I went to scoop him out and he moved, which was almost worse than him being dead. I immediately decided to remove him from the tank, he is clearly going to die, and I cannot risk a disease spreading in my tank.

I was running late to work, so I couldn’t do a water change this morning (which I do every weekend, normally 50-66%). I know some may say this is bloat or ammonia poisoning, but the blood makes me think against bloat, and the fact NONE of the other fish are exhibiting ammonia poisoning, no one (18 other cichlids) are hovering at the top for air. No bloat in anyone else. I’m at a complete loss. The three pictures are what he used to look like, what he looked like last night, and what he looked like this morning.

I’m going to do a large water change as soon as I get home. I’m terrified my tank is contaminated with something so I would like to get ahead of it and start treatment tonight if anyone thinks this is a specific disease.

1st thing when I get home I will:
1) assess all fish for any abnormalities, colors, ripped fins, Gill issues, breathing at top or laying on bottom
2) year water BEFORE I do a WC
3) Do 75% WC unless someone suggests less (I want as much contaminated water out as possible)
4) do anything you guys agree on and suggest.

Ever since I’ve had these cichlids, the tank has been AMAZINGLY stable, ph is a little low around 7.8 usually, but I don’t mess with it as texasdomer once told me not to focus on that if the fish seem ok and other parameters are off, ammonia has been 0, nitrite 0, nitrates 20-40, usually 10-20, and I would say closer to 20 most of the time.

The ONLY thing I have changed since last week is when I did my water changed, I “cleaned” two of three filter cartridges with aquarium water. The two in my penguin 400 were so gooped up with nasty that the water had started bypassing the filters, so it was well past time to get some of the funk off so water would pass through better. Other than that NO CHANGES. No extra fish nothing.

On a side note, in the past month I’ve lost 4 fish if I include this one (so only 3 at the moment). I had 20 African cichlids in the 75 gallon. I went on vacation for a week and set up an auto feeder. Well one fish jumped out of the 4 inch gap I left where the feeder would drop food, found on floor dead. The feeder was completely empty when I got home, and I found my smallest yellow lab eaten (assuming they decided to feed themselves) and one of the two remaining peacocks I have been trying to rehome per your suggestions was eaten. (I had 4, two were rehomed before I left, my huge one is still alive and owns a nice piece of territory, and the other got eaten).

So now I’m down to 17 cichlids at the 3 to 3.5 inch range, and likely losing the 4th (Acei) today, so that makes 16, my gut tells me that is not enough in a 75 gallon to disperse aggression. And I have noticed aggression increasing since I got home 3 weeks ago. Assuming there is no disease in the tank, should I look at increasing my stock again? And to what number?

Thank you!!
1st pic, months ago, but one of the two normal colors I see, either deep purple or vibrant blue/purple

2nd and 3rd pic, last night around 8pm when I moved him into the breeder tank so he wouldn’t get picked on. Very discolored

4th and 5th pic, this morning at 8:30...notice how blood colored his tail got in 12 hours. Still horrible discolored elsewhere.

And yes, he is alive in all pics, even though upside down.

I’ll try to find a picture of them in the recent weeks since the first picture is older and I’m not sure if that is even him out of the four of them. 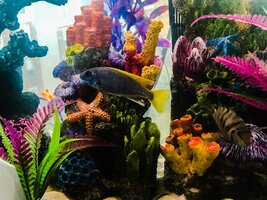 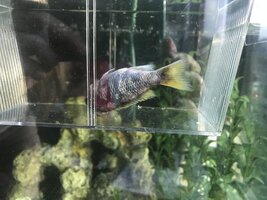 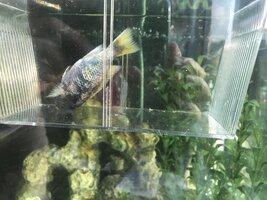 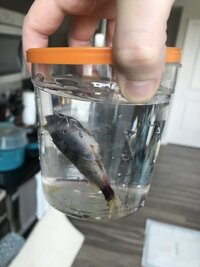 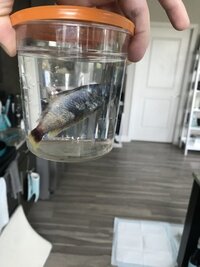 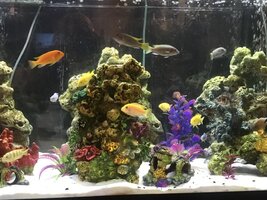 This is the only other recent picture I have of 3 of the 4 of them, but it’s pretty blurry and crappy lighting
sorry

May 15, 2021
Rose of Sharon
P
Strange Behavior and Random Deaths?

Warning: dead fish photos. help wanted in trying to figure out the cause of death