I have had 4 Harlequin Rasbora in a 28 gallon community tank for about 10 weeks, and they have seem very healthy/happy until now. The tanks was started in December, and thThe tank mates are 5 Platies, 5 Neon Tetra, 1 Endler, and a bunch if cherry shrimp. The tank is planted, moderately at best, and everything is doing fine. I have a T5NO light that is on for 4 hours in the morning, off for 4 hours, and then on for 4 hours in the afternoon/evening.

I change about 50% of the water every 1-2 weeks, and my Ammonia/Nitrite/Nitrate levels have always been 0. The plants seem to take in all the Nitrates right away.

Yesterday, I noticed that two of the Rasbora were very bloated and almost deformed looking. All of the ither fish appear to be fine. One if them had lesions and a bulging eye. The other was very bloated and looked misshapen. They were both swimming funny and constantly opening their mouths. I immediately removed them from the tank and figured it was best to euthanize those two after doing a little research.

The fish are normally fed for two days, then the third day is skipped. Their main diet is Omega One Veggie flakes. But occasionally I give them some freeze dried blood worms, Omega One Frozen Community Fish Formula instead. And an occasional algae wafer or two get dropped in once a week or so.

I looked closer today and one if the two remaining Rasbora looks a little bloated. I setup a temporary quarantine tank, but am not sure what is best to do from here. I will attach pictures of the two that were euthanized, as well as the fish that is currently quarantined. Thank you in advance for any advice/information. Let me know if you need any more information. 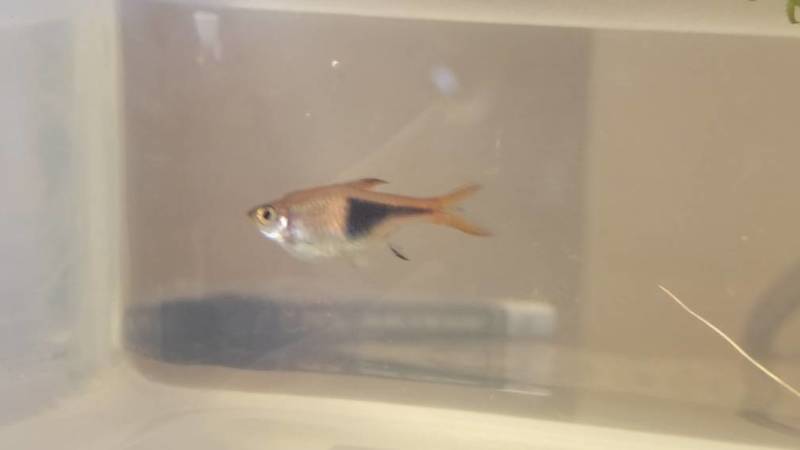 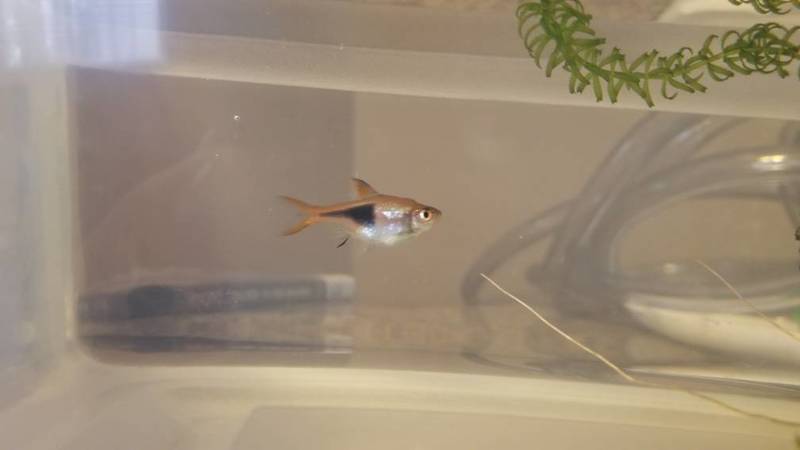 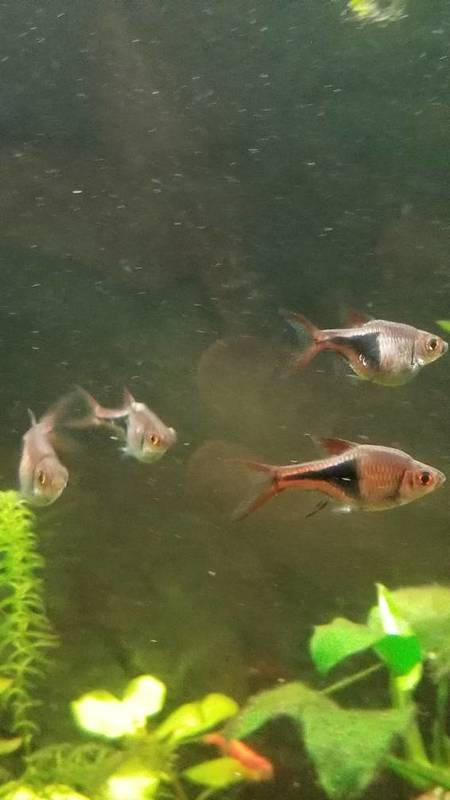 Two fish in focus were euthanized, I one with the visible lesion has a very bulged out eye (see next photo) 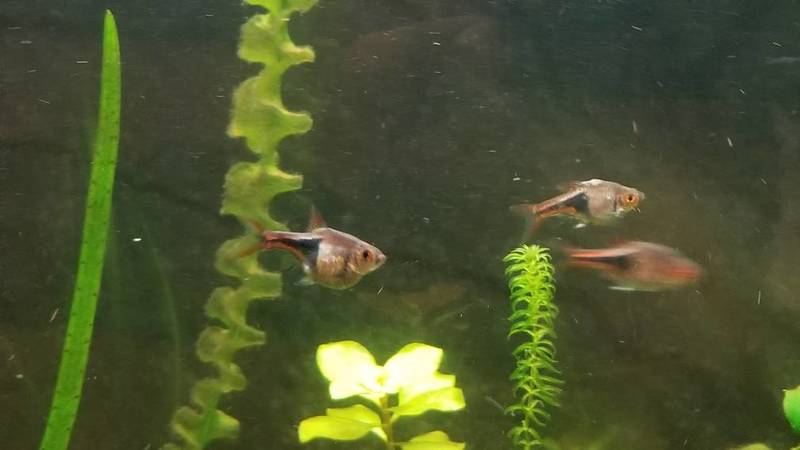 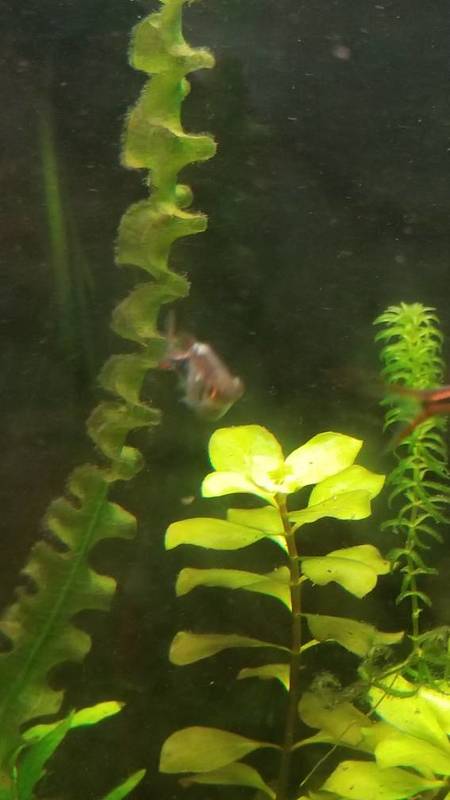 Photos or one remaining Healthy Rasbora and overall tank 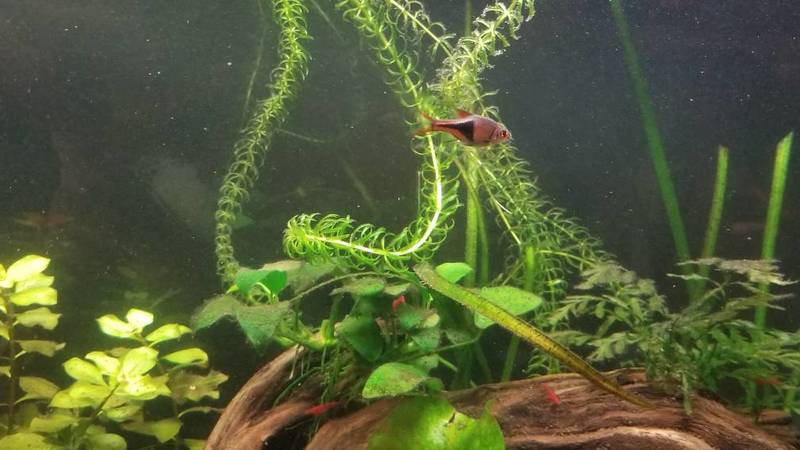 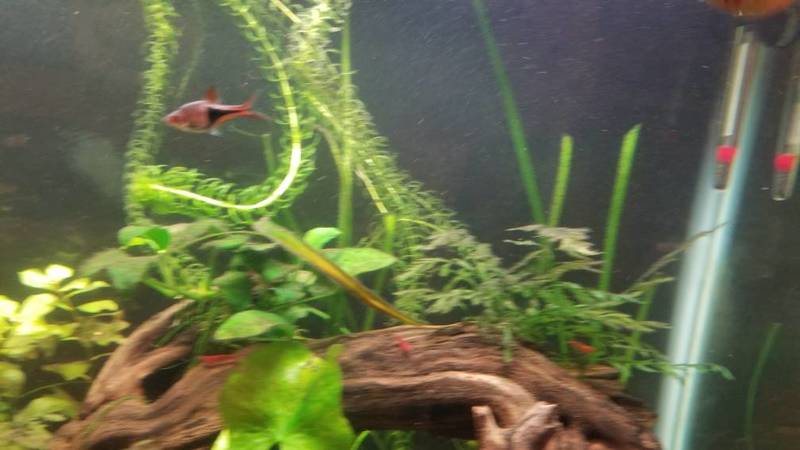 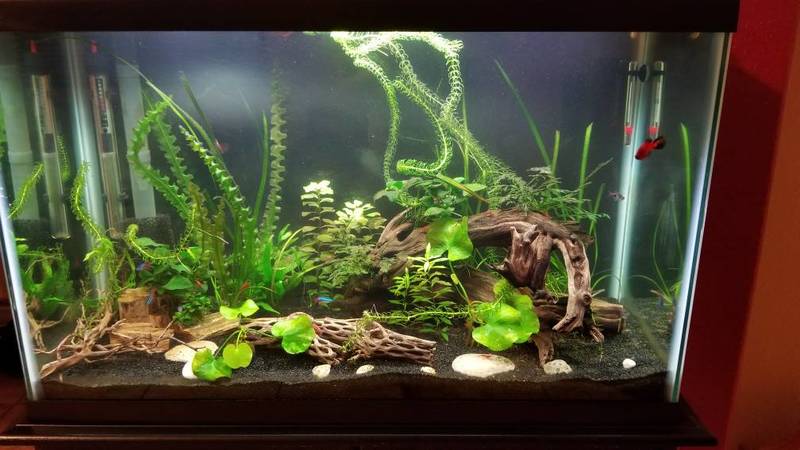 Any suggestions on how to treat this would be much appreciated. The fish does not seem to be doing well in the quarantine tank. It did not eat today and is opening and closing mouth pretty constantly now.

I unfortunately don't know what is up with the fish. If you don't get an answer, you can simply add a comment "Bump" and it will bring it to the top of the list. I am starting to learn about meds, but this isn't familiar to me. I hope someone can give you some advice.

The fish probably isn't going to make it, but any suggestions would be helpful in case this comes up again.

What test kit are you using? Is it the API liquid one?

I asked above because you said you have 0 nitrates all the time. Seems odd but is possible. The other possibility is that when you used the test if API you need to shake it more. You have to beat/shake the heck out of bottle 2 for 30 seconds and then after adding #2 to the test tube, shake it hard for a full minute. Then let it sit for 5 minutes. If you don't shake it well, you will end up with a false 0 reading. Your nitrates could be sky high. If you already knew this please ignore.

Yeah, the API kit is what I use. I have always shaken it up the same way. When I first cycled the tank, everything went normal. I used ACE Ammonia as the source. And I watched the Nitrates levels rise, spike, and then brought them down with water changes. I only added a few fish at a time, so I think the bio load was pretty small and assumed that the plants were taking in the Nitrates. The plants grew pretty quickly, so I am thinking they have been able to keep up with the nitrate production. But I have done the test the same way as when I was getting nitrate readings during the cycling process.

jminator22 said:
Yeah, the API kit is what I use. I have always shaken it up the same way. When I first cycled the tank, everything went normal. I used ACE Ammonia as the source. And I watched the Nitrates levels rise, spike, and then brought them down with water changes. I only added a few fish at a time, so I think the bio load was pretty small and assumed that the plants were taking in the Nitrates. The plants grew pretty quickly, so I am thinking they have been able to keep up with the nitrate production. But I have done the test the same way as when I was getting nitrate readings during the cycling process.
Click to expand...

I was hoping it was something simple like that.

Hi, With the lesion and bloating like that I am guessing they have either an internal bacterial infection or parasites or both. How has their poop looked if you have noticed it at all?

Have you treated them or the tank at all with a parasite medicine?

Would you describe the lesion? I didn't see it on the picture or don't know what I am looking for.

It had a couple of white spots. You can see the main one in the picture above the bukged eye photo. It is the fish that is in focus on the right side of picture. The lesion is at the top of the fish in front of the top fin, and another small one near the gill. They just look white. I don't recall ever seeing their poop, they aren't like the Platies where it hangs down frequently.

I have not treated the tank with anything, that's why I came on here to get some advice. None if the other 12 fish seem to be showing symptoms of anything.

Oh ok, based on that, I'd start with nitrofurazone and possibly also kanaplex later. It is most likely columnaris. You can find it in API Furan-2, Tetra Fungus Guard, Jungle Fungus Clear (Walmart sells this).

I would treat the main tank honestly because It will most likely spread.

Columnaris Symptoms and Treatments: What is it? Columnaris is a gram negative aerobic bacterial...

Thabks for the info. Are there any side effects from any of these that I need to look out for? Just curious of any risks. This is my first aquarium and I'm not familiar with any disease related things.

The nitrofurazone will turn your tank water a "lovely" shade of yellow/green and your plants won't like it but it is a very good medicine. It has never killed any of my plants though some lose leaves and they grow back.

It should not hurt your bio-filter/nitrogen cycle. I'd do two, back to back 4 day rounds with a 40-50% water change after the first round.

I wanted to make sure you knew to take the carbon out of the filter while medicating. It will absorb it. Then when you are all done medicating put new carbon in to absorb any left over meds.

Thanks, I continue any carbon in my filter. But can put some in after if it is recommended.

Is there anything special I can do for the quarantined fish that is showing symptoms? Or just the same treatment? I don't have a nice quarantine tank with a filter. I put it in a gallon of water in a little storage container. I used half aquarium water on the initial setup, and put some sponge from the filter in with it. I have been changing about 60 percent of the water daily.

I purchased the API Furan 2 on Amazon, it will be here Sunday. The other fish in the aquarium still seem to be doing fine. The one in quarantine is staying about the same. Doing a lot of gasping, but bloating is not getting worse.

Do you think a salt treatment could potentially get rid of it, and then I could have the API Furan 2 on hand for future use if necessary? It seems that I must not have the fast moving strain.