Hello, my Half Banded Spiny Eel hasn't been coming out lately, but last night and just now he has been out and acting very weird. He just lies there barely moving (Not even his Pectoral Fins) and won't move unless I touch him (I thought he passed last night so I went to get him out of the Aquarium with a net and he didn't move until I touched him, he trusts me so that could also be it). He is Eating, I fed him on Friday and he ate a good sized bloodworm. I'm going to test the Water Parameters now just to make sure it isn't that. He is almost a shade of black (He is usually a dark brown, with the banded pattern) and I can hardly make out his pattern, he looks completely fine (With the Exception of him being almost being a solid shade of black and a indistinguishable pattern). My Female Neon Swordtail is hiding near him to avoid my Australian Rainbowfish since he thinks she is another Rainbow, and I only have one (I assume, she may have made a biting movement towards him). The only thing changing in the Aquarium is the PH (Maybe, I put some Driftwood in there for the Pleco and to possibly lower it, which I will check), elevated water changed (For one of the Tetras Fin Rot, been there for a few months now), and new Tankmates (May have to remove the Neon Swordtail, the Female Red Velvet has paid no attention to him, nor has any of his other tankmates). There has been this thing going around my Aquarium, but it may be to genetic defects or improper stocking, but my Female Red Velvet Swordtail died a while ago to something, and my Female Australian Rainbowfish died a week after her, I'm not sure if it was to the same thing or not as I came to turn the light off and she was laying on the gravel, poor things. They both weren't eating for a week or so before they passed away. I have been dosing the Aquarium with Microbe-Lift Herbtana for a long time, I don't think it would've done anything to him. I can add in some Aquarium Salt (Which is good for Spiny Eels) and see if he improves but Catfish aren't known for tolerating Salt.
His tank mates are:
5 Long Fin Black Skirt Tetras
3 Swordtails (Male Red Velvet, Female Red Velvet, Female Neon, who may or may not be carrying)
1 Australian Rainbowfish (I know I need more, I'm looking for Females but the store I go to has none, I'll hopefully be getting a Male or any Australian Rainbow on Monday, as well as another Female Red Velvet Swordtail)
1 Half Banded Spiny Eel (Hopefully he'll live out his natural lifespan)
1 Bristlenose Plecostomus
OP

Parameters are good,
PH: 8.4 (Driftwood didn't do anything)
Ammonia: 0-.25 (Lighter than .25, but greener than 0)
Nitrite: 0 (Never got any Nitrites oddly enough)
Nitrate: Somewhere from 0-5 (It doesn't turn up Orange, it comes up a yellowish-orange instead, I think the plants are to blame for how low they are)
OP

This is him before: 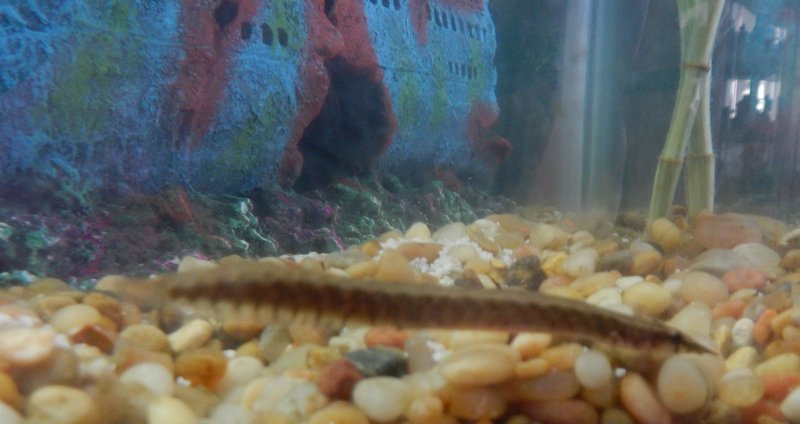 This is him now (Sorry for the blurry pic but you can easily notice how his color has changed): 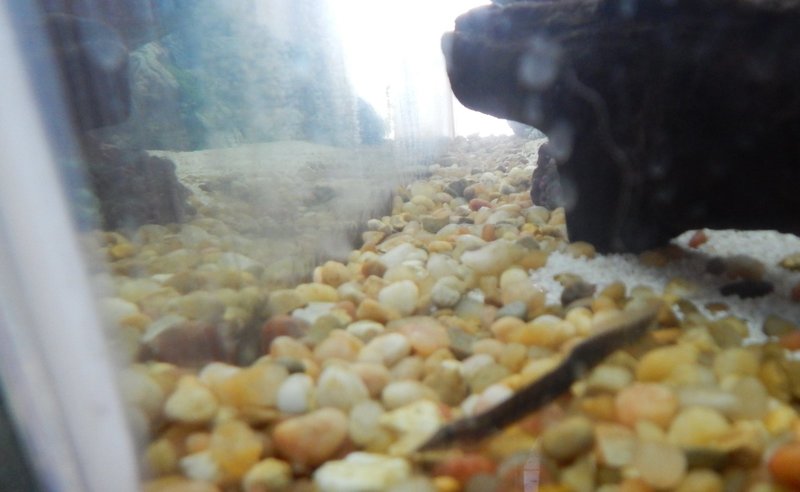 I've never heard of a Spiny Eel spontaneously changing colors like this.

Do you have a full tank picture? Right off I'm noticing very little cover and no sand. Mine has ample cover and a small gravel. On changing colors, most fish can to some extent and I've seen mine do it defensively. Lastly, the sword tails might be at risk as the eel grows.
OP

The Swordtails are not a risk, they get really quite large and most Spiny Eels have narrow throats, which is another reason why you feed them Worms. And no, I do not have a picture seeing as he passed away a few nights after I made this post. As you can tell no one replied and I was unable able to save him.

So sorry to hear that. I found I need to cut the worm up for the eel.