Member
If I free roamed guinea pigs in my carpeted room would I have to worry about pee? I don't currently have any and I'm unlikely to get them but I'm curious in case I ever get the chance. I'm currently free roaming my hamster for short periods so I'm curious. Thanks!

Member
It can definitely happen and likely eventually would. I mostly hear of people putting fleece blankets down to protect their own floors. Once I heard of someone using some sort of diaper for them but I don't know how you would go about that.

Member
Are you wanting to free roam them 24/7 or just a few hours a day? You can litter train them, so I recommend watching some videos on that. Also keep an eye on your hamster when free roaming. I used to do that and was sure my room was 100% safe. She found the tiniest whole under my bathroom sink that I did not even know was there! She got in the wall but luckily came out and that was the end of free roaming lol.

Salem is right about the fleece! You can get a big section of it from a craft store and lay it down. Then get them a litter box and litter train them. They will likely pee/poop in the box and not on the fleece. Then you can just wash then fleece once a week or something.

Member
I personally wouldn't free-roam a guinea pig, not just because they might pee but because they might also chew on something they shouldn't or get their foot caught in a heat vent or get into some other mischief. Not to say that I think they should be kept in a cage all day either. As usual, pet stores sell cages that are way too small for the animal they're intended to house. I would suggest looking into C&C cages (cubes and coroplast). I was lucky to have a whole small room for my piggies back when I had them, so each piggy had at least a 3x6 cage. Downstairs, I was able to let them free roam for periods of time--the floor was hard rather than carpeted, it had no vents or other "tiny feet" hazards, and it had no cords or anything that could be dangerous if they got curious. Upstairs, I used a puppy pen to confine them to an area in the kitchen. While they preferred to use their litter pan while inside their cage, they weren't as apt to use it outside their cage. I didn't try to litter train them either, though.

Member
I agree peddidle that free roaming has its dangers. But as long as the room is “child proofed” there shouldn’t be a problem. If it is safe then the worse they could do is chew your baseboards. Nicolademee here’s a video if you are not able to free roam safely after seeing peddidles post, they did list very real hazards to any small animal that likes to chew.

Member
I know there's lots of dangers, but after a few days of free-roaming my hamster, I think I've gotten them all. There's no vents near the floor, all wires are lifted high, and I have wood planks to place in front of doors and places I don't want her and she's yet to find a way around them. The carpet's been deep cleaned so there's nothing bad hiding in it, and I haven't smelled pee outside the cage yet. If my room is safe for a dwarf hamster, I think guinea pigs will be safe too, provided I get taller barrier planks . Thanks for all the advice guys!

Member
I don't have anything to contribute, but I had to see the discussion when I saw the title. I thought it was referring to guinea fowl, and then after opening it I didn't immediately see that it was guinea pigs, so you can understand my confusion when I saw the part where you asked about free-ranging them in your room.

Member
I might have a fenced in large area, lay plastic (like a tablecloth) then a fleece. I had those playpens for my dogs when they were puppies and housetraining. Could work for guiney pigs too?

Member
Peeing is what Piggies do best! 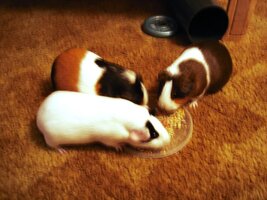 Moderator
Member
AmazonPassions ‘pigs’ live in luxury, this is just one of the runs
My Guinea Pig Cage (mansion) | Rodents 305939

Yes! Heaven forbid you open the fridge door and start a wheek-fest! Their popcorning is pretty entertaining as well, but their wheeking is my personal favorite.

Member
They toilet train themselves, typically. I’d set up a large caged in area much like a rabbit pen if you know what I mean. If they have access to the cage and regular pee/pooping area, they’ll just use that.

Member
When I had guinea pigs they were notorious for hiding under things out of human reach so I’d definitely cage an area. Not sure about pee but a litter box is probably a good suggestion (not sure if they would use it)

Member
I have 2 boys and I can't imagine free roaming them. Every part of thier 2x4 with loft gets pooped in every day. Plus they pee in each others faces and glue things regularly. If you get them as babies can they be litter trained? In
You must log in or register to reply here.
Share:
Facebook Twitter Reddit Pinterest WhatsApp Email Link