Guess who has two thumbs and got another box in the mail!

My newest fish installment is courtesy of Rogue. I got panda cories, rainbows, and bamboo shrimp.

Cories: I ordered six panda cories (before the group deal). Unfortunately one got speared by another cory (who knew cories had pointy implements?) so there were only five left. Rogue couldn't catch one and rather than stress him too much (the cory, not Rogue ) he decided to wait until my next box (that's right, I have another box coming ;D). So I received four cories.

They are TOO TINY. The pictures do not do them justice. They are probably about the size of my pinky up to the first knuckle. I can't think of any easier comparisons haha. Almond-sized? That seems about right. I can't get over how cute they are!! They travel around together and scurry up and down the tank walls and they love to sit right in the front, for easy picture-taking.


Rainbows: I got six rainbows from Rogue awhile ago but one didn't make it, so I ordered three more (one male and two females, to have an even four each). Don't worry, my math isn't that bad We decided we wanted eight instead of six. Unfortunately another female didn't make it and died this morning (added them late last night). The only current speculation is that she was possibly egg-bound, as one was a breeding female.

These are a little bit older than my previous ones and show the characteristic rainbow shape a little more. They look great even right out of the box, and fit right in with my old school. Well, they did come from the same place I suppose. Maybe it was like a happy family reunion! ;D


Bamboos: These guys are TOO COOL. I got two (one thanks to JW kindly letting me have one ), one lighter one and one red one. When I put them in the tank from the bucket, I was amazed how fast they ran away!! I had no clue they were so fast. Also I wasn't expecting them to be so big! The ones at Petco are only about an inch or two long, but these guys are huge.

The lighter one came out of hiding so I got some pretty good pictures. I'm not sure what color he is exactly; I thought I was getting a red one and a yellow one, but this lighter one looks pretty red so I don't know! It was hard to see in the bucket, but the bigger one was the lighter one, and the darker one looked almost black down in there. (He was hiding more so it was hard to see him.) Either way I'm in love with him already! Don't be surprised to see a new avatar or two in the future.

I won't be getting any HikarI First Bites for them until this weekend (my tank isn't quite mature enough to support their filter-feeding lifestyles, so I'll be supplementing their diet until then) but since the one came out I wanted to feed him. So I crushed some flake and used a turkey baster to put it right in front of him. I was surprised how not skittish he was! Even with the platies/rainbows darting around trying to eat the bigger chunks, and my turkey baster, he didn't seem to mind. He perked up and started poking around with his fans, so that made me happy. He eventually stopped eating so I'm hoping that means he wasn't hungry anymore.


I also included a semi-whole tank shot from this evening.


Let me know what you all think!

Beautiful. Wish I lived close enough to buy from members!

those panda have had one long journey, glad to see them home

Looks great. I too was amazed by how big the bamboo shrimp were. very cool

I got two bamboo shrimp from Petco (they are over 2.5") and they are amazing! I'm in love with them

;D Looking good!! I told you those bamboos were big!! You didn't believe me . I think I sent you an orange one and a red one. I made sure not to send you a yellow one.

Beautiful fish The bamboo shrimp are monsters! I really like your setup with all the floating plants and the driftwood covered with plants is very nice.
OP

Also, thanks Rogue! I haven't seen the red one yet (except for in the bucket, where he looked like a black blob clinging to the mesh haha) but I'm sure he'll be super awesome too.

My stocking is finally progressing!! 6.5 months after setting up the tank haha. I can't wait to put some angels in there!

Hey I think the other day was panda day. I got some too
I'm in love with them. So I TOTALLY understand.
Frankly I'm surprised your avatar isn't a panda!!!

Love the tank! It's puuuuurrrrrty!
OP

They'll be my next avatar
OP

Everyone is still doing very well. The other shrimp came out! For a multitude of reasons, we decided to name them Phobos (the one in my avatar) and Deimos (the red one) after Mars' two moons. Firstly, there is interesting Mars stuff going on now, so it seemed fitting to name them after something that is making history at the moment. Secondly, there are two moons and two shrimps. And thirdly, they're red and orange which are obviously fitting Marsy colors. Phobos (the moon) is bigger than Deimos, so we decided to name the bigger shrimp (the orange one) Phobos and the other one Deimos.

Wow, his stripe is very pronounced! You know what that means ;D. You got one very very happy shrimp.
OP

Hooray!! I know, it looks like it's glowing! That is the red one, right? I haven't seen both of them at the same time so I'm not sure haha.

I got some First Bites today so next time they're in a good spot I'll feed them.
OP

Update: One of the bamboo shrimps molted!! I think this means they're happy. I've never seen them picking in the gravel, or even on the substrate for that matter. I spot-fed one last night, and the particulate was floating around the tank so much I'm sure the other one (wherever he was hiding) got some as well. The molts of bamboo shrimp are significantly weirder-looking than RCS molts

Unfortunately I lost a panda. Not sure why, the others appear to be doing fine. Down to just three now. The rainbows are all doing well and schooling together.

Very nice....I want to get some Bamboo shrimps but I don't know if I want to target feed them yet.

Sorry about your Panda.

I just found a big chunk of bamboo shrimp molt as well! I do spot feed, but occasionally they come sift the substrate as well. Mine are super red looking too. I love them! I'm happy for your shrimp! I got a good chance to take pictures the other night, and got some great shots of one shrimp. 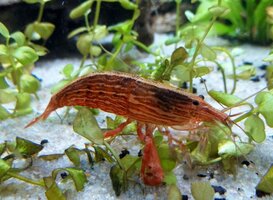 That's a great picture! His stripe means he's happy I rarely see both of mine at the same time, so I have no idea where they're hiding. I only spot-feed if I see them and they're in a convenient location for feeding (IE not hiding behind a rock or something).

Mine are super active and out and about. My vampire shrimp hide a lot though. (But I know their hiding spots, shh, don't tell them.)
OP

Your secret is safe with me When I see mine it's always in the same spots, so I'm assuming they have their normal hangouts and I simply haven't found all of them yet. They're always on the same side of the tank as the spraybar since the flow is better over there, so at least that narrows it down a bit!

You are making me jealous with all this talk about Bamboo shrimps. I've wanted one (actually 4) for the longest time. I would say I have good self restraint. Now that I have the Angels, I don't know if they will get harassed by them.