Fingers-crossed for you.
Good Luck!

As best I can tell, Junior and that female ended up spawning. He hasn't emerged from the nesting site yet; I can't see it directly, but I know where it is. The female emerged on Monday with a clearly smaller, less yellow belly, so it looks like she released eggs. Super promising! Presumably Junior will emerge sometime in the next week once any potential fry are free-swimming. Unfortunately I don't have a fry tank right now, but I have a breeder net I can hang in the tank for a small amount of fry - under the huuuuuge assumption that I even manage to catch any before they're all eaten.

I think the more dominant of the new males may also be guarding a nest. He was also getting flirty with a female on Sunday, and has been in hiding ever since (and another female was temporarily MIA).

The third male who seems to be the least dominant is....still figuring things out. He's been trying to attract the ladies with mixed success. He finally got a female temporarily interested after much displaying. She followed him around, reciprocated his display with her fins up, and followed him to what seemed to be his proposed nesting site. Sadly she was decidedly NOT impressed with the nesting site and refused to enter it. I swear, if she could talk, she would have been saying something along the lines of "Here? You picked HERE? Yeah....no." Hopefully he'll eventually sort things out.

Apparently the mood is starting to strike the rainbows too! One of the male rainbows is especially colorful (presumable the most dominant), and has been chasing the females around and lightly sparing with the other males. Hopefully I can make some spawning mops this weekend to encourage them. It would be nearly impossible to find loose eggs around the tank, so I'm hoping they'd opt to use the mops. I have no experience with rainbows, so we'll see what happens!

Not much to update, just a quick pic of the tank tonight. 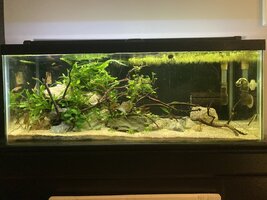 I’ve temporarily added a young SAE into the tank. He‘ll ultimately move into my 75 gallon, but I’m curious to see if he tackles the BBA at all for me. Fingers crossed!

Not much to update, just a quick pic of the tank tonight.

I’ve temporarily added a young SAE into the tank. He‘ll ultimately move into my 75 gallon, but I’m curious to see if he tackles the BBA at all for me. Fingers crossed!
Click to expand...

I wasn’t sure that mine was eating any BBA as I never saw him near it. But it’s definitely less so I guess he is!

Junior was finally out and about again today - first time I’d seen him out since he started nesting. I suspect that any potential fry were eaten, since I couldn’t spot any. Though it’s always possible there are some hiding amongst the plants and rocks.

I tucked a small piece of PVC behind the rock in the back right. If I’m lucky and it’s used as a nesting site in the future, should be easy to move if I want to try to rear the fry.

Finally got around to making a couple of spawning mops and added them to the tank last night. Lo and behold, I picked out 8 rainbow eggs from the mops this evening! I’m super excited! Only my second species to have eggs - I’m looking forward to one that grows more quickly than peacock gudgeons!

For now, I have the eggs floating in a container in the aquarium. Assuming I should leave them in there until they hopefully hatch in 2-3 weeks, with small water changes along the way, but not sure yet where to put the fry once that happens. Also, any need to add methylene blue in with the eggs? Thoughts? Demeter?

As fry foods, I have golden pearls, hikari first bites, frozen BBS, and I can hatch fresh BBS. Plus there should be some infusoria in the tank. For anyone who has raised Pseudomugil rainbowfish, do you think I’ll need another live food like vinegar eels, or can I get by with what I have? Hoping I’ll be prepared.

I'm glad yours are breeding now! My Gertrude's should be spawning but so far it looks like the eggs I've been collecting are just forktail and dwarf emerald rasboras. Plus I'm hatching out some rice fish and hopefully some Pseudomugil luminatus if the single female can handle the attention of all 5 males.

I always add Meth. blue to my eggs. For a short while I stopped but then I noticed more eggs were going bad than usual. As for foods I use a paramecium culture, then vinegar eels and BBS until they can take dry foods. For dry foods I use a mix of krill meal, decasulated brine shrimp eggs and fry crack (off aquabid). I'll be adding to that mix within a week some freeze dried daphnia and golden pearls. In 2-3 months I'd say your fry should be big enough to go back in with the adults. Pseudomugil grow fast and have tiny mouths so a half inch fry is usually safe.

Picked another three eggs out of the mops earlier, and added a tiny bit of methylene blue to the container with eggs.

Also ordered a large starter culture of vinegar eels, so I can hopefully get that going this weekend!

Just a quick update - I have 7-9 fry that I'm currently raising in a half-filled 5 gallon, plus another 8-12 eggs waiting to hatch. No pics yet because it's too hard to get my camera to focus on the fry, but the oldest two are around 1 cm or so in length.

Update on the rainbow fry:
Unfortunately we were out of town for ~4 days in late Sept, and lost some of the fry while we were gone. Currently have 4 from the older batch, at least 2 of which I think I can move to the 20 gal any day now. I also have another 4 or so fry that are only a couple days old in a small plastic tank, plus more eggs incubating. So hopefully more on the way soon!

The gudgeons are also definitely breeding, though I haven't seen any surviving fry. However, one of the males is finally nesting in the piece of PVC I added to the tank, so I can move the nest if I want this time (all the previous ones were in the rocks/driftwood). All my pictures were blurry, but you can at least make out his general blurred shape in the tube. 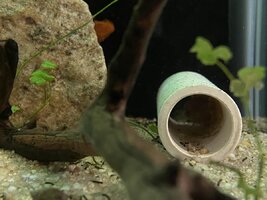 I don't have a free tank, so trying to decide if I want to move the nest and male into a hanging breeder basket in the 20 gal for now. Or if I move the older rainbows soon, I could move the gudgeon nest into the then empty 5 gallon fry tank...decisions, decisions...
You must log in or register to reply here.