Some of you are familiar with my 3 foot newt paludarium, The Mountain Grotto. In the journal for the paludarium I noted that I was having difficulty with various terrestrial mosses, because unlike my other paludarium this is medium humidity. The last moss I tried was from New England herpetoculutre, I'm unsure of the specific genus this moss belongs to but it looks to be some sort of fern moss. It has taken in the high light and very damp areas of the setup, like the top and sides of the waterfall. Unfortunately everywhere else the moss still remains dormant. I decided as a fun experiment I would remove the dead moss from the potting cup I DIYed that covers my filter pump chamber, and fill it with damp akadama and buy some of those random aquarium carpet seeds you can buy online. It seems people that tried to dry start these had some success, and there's question to whether or not these seeds yield a plant that is even fully aquatic. I bought the small leaf plant seeds, so it should look something similar to dwarf baby tears when grown in a terrestrial setting. I have no idea if they will sprout or survive this way, but why not? Instead of a carpet of moss I think the paludarium would look so epic which a terrestrial carpet similar to monte carlo or baby tears.

So, here is a journal documenting the progress and will determine whether or not this is a failure or a success. If it is successful I will be removing most of the moss and adding more akadama and planting the seeds everywhere.

Today was planting day for the seeds, I simply dumped them all over the damp akadama. I also sprinkled some on some dormant cushion moss and also the dragon stone to test where this plant can and can't grow and if it actually needs substrate or not.

Fingers crossed they sprout in a few days!! 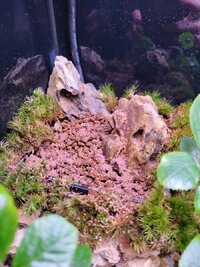