Got Our Fish At The Movies

Literally, my family found 2 Gold fish at a theatre. Since then, we have mercilessly tortured (mortally) 3 neon tetras and a snail.

It has been a month since we started our inadvertent fresh water Guantanamo (spawned by a theater misadventure) and my wife is tired of being a fish killer.

We went from the 2 theater goldfish to an additional 2 zebra fish, 3 neon tetras, and a very fat snail (along with some tiny inadvertent snails).

Two days ago, all the neon tetras and the fat snail disappeared and we cleaned out 60% of the water, all of the tank toys (read: plants and decor). We found one dead tetra with white spots and the snail was dead. No sign of the others. After terrorizing the zebras and goldfish, we robbed them of bacteria by switching out the filter.

I decided the aquarium was lonely so yesterday, we went and got a few ghost shrimp and 1 happy, fat snail. We told the pet clerk that our neoen tetras had died and one was speckled white.

She sold us the ghost shrimp and snail anyway and recommended that we get Jungle Ich Guard. Apparently, she was applying for a job at our freshwater house of horrors. We went home, waited the appropriate time, introduced the invertebrates, and added Jungle Ich Guard.

The shrimp disappeared this morning (read: dead) and so we added another dose of Jungle Ich Guard and brought home more ghost shrimp. In a matter of hours, the new ghost shrimp unearthed the deceased tetras and were having a happy (presumably) last meal.

My wife found this site, tossed some garlic in the tank (I cannot begin to describe the stench) and here we are.


We have our original 2 theater gold fish, along with 2 zebras, a suspicious amount of ghost shrimp and an intentionally purchased snail with some inadvertent extra snails in a five gallon tank.

We have done every inhumane thing imaginable to these poor creatures. Now that we know what we should have done, what do we do to fix it?

Start by rehoming the goldfish, they get way to big for a 5 gallon and are messy, plus need cooler water than your other fish, you are overstocked on fish, plus you have schooling fish in too small numbers... all of this is contributing to the death rates. Next are you using a filter or heater? Did you cycle the tank? Do you know about the nitrogen cycle? If so are you testing the water? Let's start with these questions first and move from there. I can definitely say that first things first you should buy a larger tank. If you're near a Petco they have the dollar per gallon sale right now.

It sounds like we should purchase a much larger tank and start the cycling process in that one and move these guys over when the tank is ready...?

That would be the smartest option... You could also jump start the cycle in the new tank with a lovely product called Tetra Safe Start.

Yes - add heater, bigger tank - go ahead & move the filter you're using on the tiny tank & run it alongside whatever you get for the bigger tank, that way you're transporting whatever cycle you've got going. Or at least divide the media inside the smaller filter, & stuff some of it alongside the media in the new filter. Everything you've got, except for the goldfish, needs tropical temps. You could get the goldies a nice 40 gal for themselves & keep the snail with them, just keep shrimp &/or a betta in the 5 gal.

Is that a liquid or strip test? What is the ammonia? I would get Prime by Seachem (a water conditioner that neutralizes up to 1 ppm of ammonia and nitrites). I would then go to a store (Walmart, Lowe's, Target, etc) and get a ~30 gallon food grade plastic storage tub and a ~15 gallon food grade plastic storage tub. Both are very inexpensive and are great hospital and temporary tanks, should be thick plastic. I would separate fish that you think are sick and fish that are not sick. The goldfish should go in the 30 gallon tub, so if they are sick the sick tank would be the thirty and if they aren't the sick tank would be the 15. Sick tank shouldn't have Prime in it, it messes with some medications. Keep up with large water changes. If the goldfish aren't fancy, you should rehome them to a pond at first chance. If they are fancy, it's about 20 gallons for the first fish and 10 more gallons for each additional fish (depends on the type of fancy, sometimes more). What survives and the type of goldfish will depend on how the situation will be handled long-term.

It sounds like we should purchase a much larger tank and start the cycling process in that one and move these guys over when the tank is ready...?
Click to expand...

I would figure out what type fish you want. You can do a small single fish such as a betta in the 5 but if you like the community tank style then go for a larger tank. There is no harm in cycling the 5 either way. The shrimp and snails could stay in the 5 even and rehome the fish to a larger tank, if you move them all to a larger tank you'll have a cycled quarantine tank so I say keep cycling and start looking for an upgrade too. I know a lot of experts are on this site and will have further and more detailed recommendations.

These are all of the chemicals we currently have in the tank - and administered according to direction. (Tried to upload a pic: aqua safe, easy balance, safe start, and ich guard.)

We have 5-in-1 easy test strips to test the water. No idea on ammonia levels, though.

Wife has been reading like crazy, removed the carbon from the filter.

Our plan:
1. Rehome goldfish - can we wait 2 months to put them in the pond? It's winter here.

3. Purchase large, thick totes to put sick fish into. (No filter or air for these??)

4. When larger tank is ready, move filter from small tank over to big tank with the shrimp, snails, and zebra, to continue to use the good bacteria.

5. Small tank is good as hospital take in the future.

Is that about right?

The totes would need a filter and possibly an airstone, many people winter goldfish in them, usually larger totes though.

Invest in a liquid test kit, strips are usually very inaccurate
I support the tote idea
That way your fish won't be stunted and can most likely go in your pond in 2 months

Guys, thank you so much for all your help!

We stayed up an ungodly hour last night researching temperatures of fish to determine whether we want warm or cold water fish.

I have a temperature question to clarify and now feel very uncomfortable asking the fish tortu- I mean pet store clerk.

With the newfound knowledge that

Would it be humane to have the goldfish in a 30-40 gallon tank with the others for two months at 70°? It's high for the goldfish, low for the snails. Thoughts? Better to do the tote?

What type of snail? The goldfish will eat more, poop more, grow faster (if they have enough space) and have a shorter lifespan at higher temperatures. They can live at much lower temperature than what you said, probably 59-68f permanently but they can live under ice in winter.

It's probably better to do the tote

I keep my goldfish at 72F in the winter, 78F in the summer (heater is set at 72 as a lot of the plants I have need warmer water & the temp varies so much in the winter here). The house AC is set at 76 in the summer, but the tank gets a little warmer off in a corner away from the vents. I'd go with the 40 gal, & keep everyone together until spring. A bigger tank is actually much easier & more fun than a smaller tank - easier to keep stable, & you can put a reasonable number of fish in it.

Bottom Dweller, I have no idea what kind of snail. I'll try to post a pic.

Shahbazin, what is a reasonable amount of fish for 40 gallons? The two goldfish, 5 zebras, the shrimp, and a snail (or so)?

Bottom dweller, the snail is under our fake plant. I thought that plant looked out of place... 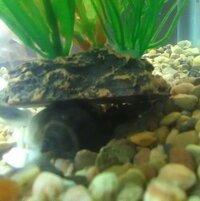 I'm not sure. Maybe a pond or bladder snail? Hopefully someone else will be able to help on this

Bottom Dweller, I have no idea what kind of snail. I'll try to post a pic.

Shahbazin, what is a reasonable amount of fish for 40 gallons? The two goldfish, 5 zebras, the shrimp, and a snail (or so)?
Click to expand...

That's pretty full, considering that goldfish usually need 20 gal. each - but these are not mature goldfish, & you're moving them outside in a few months, so what you'll be doing is getting a really solid cycle going, so you can add a number of other fish all at once, as soon as the goldies go to a pond. Here is a section of the forum where you can get some ideas as to eventual stocking recommendations: Aquarium Stocking Questions

I think your plan is OK, as long as you move the goldfish to pond in 2 months.