I have a 55g tank tank that had glofish tetras a few glo danios and 2 glofish sharks (bottom feeders). I have only fake plants so no snails but I found eggs yesterday 4/7/20 and today they are still there. I’m not sure which laid the eggs but they have changed some today and I don’t know what to do to save the fry. Help! I’ve attached photos 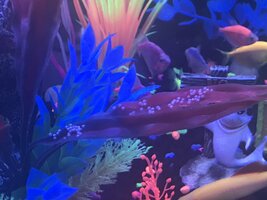 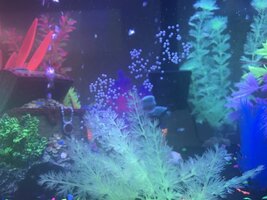 Wow....test your water and save your water parameters, Can you turn the blue light white? are the eggs a different color?

Tetra and Danio are egg scatter-ers, Since the eggs are stuck to the back of the aquarium...those are shark eggs, bottom feeders. That is incredibly cool.

And with egg layers, I believe (not 100%) that the female will lay the eggs when she's ready, if she's in breeding mode, and the male should come over and fertilize them? I'm not sure but to my knowledge, egg layers fertilize their eggs after they've been laid, additionally....it is possible...that you have 2 females and there isn't a male to fertilize.

This can happen with cichlids too, Sometimes the females go into season, even if there isn't a male around.

If the eggs stay clear, their fertile. If they turn white, than there was no fertilization.

As far as saving the babies go...it's not easy for inexperienced hobbyists with the egg layers, if you're not a breeder, than saving them is just pure luck based (so don't beat yourself up if none of them come to fruition).

But fish eggs are prone to fungus if there isn't enough water movement around them, putting an airstone right below them, so the bubbles keep water moving right over them, and wait about 5-7 days. At that point, if they're fertile, the eggs will grow little tails and they'll hatch from the wall, they should have a yolk sac that they'll feed from for the first few days while they hide from everything else in the tank, once they've taken in that yolk sac, they'll be free swimming and looking for food.

It'd be easier to hatch them if you leave them in their home tank (if they're fertile and all goes well), but it'll be difficult to separate them once that happens too, fry arent easy to catch and the other fish will eat them if they can find them - i'm surprised the eggs are still there actually. how are your sharks acting?

I just want to note: The glo fish line has been incredibly lucrative for its producers (and I'm not sure which company owns the rights), I haven't heard of anyone else getting these guys to breed in their home tank and SUPPOSEDLY, glo fish fry are colored right from birth, there is no injection or additional colorant added...This is why I asked if the eggs were colored, I'm curious. Essentially, If you do have a male/female pair and they are breeding and you end up with colored fry.....I mean, I'm not sure how you could sell those considering they are like...a 'man made, branded fish' but...you may've cracked what is like a secret code for the glo-fish breeders. Those sharks must like your water quality. Keep it up.