They actually school pretty tightly in groups of 5 or more. They require stable and clean water parameters as they can be very susceptible to changes. They don't compete well with bigger and/or boisterous tank mates, so care should be taken when choosing tankmates. They prefer areas of subdued lighting, tall plants like a lily plant or Jungle val, or surface floating plants, hardscape shelters and/or overhangs, etc. Its a lot simpler than it seems and some people have reported a rewarding display especially when the lights are out.

Yes they need to be in a group, at least 6 but the more the better. A quiet tank without boisterous or ‘hyper’ fish, shade under floating plants, and minimal current.
C

Glass catfish are amazing! But as previously mentioned, a school of 5 or 6 and even more is best. I made a mistake impulse buying them before. I got 2 for my 20 gallon and all they did was hide and were very uncomfortable. And they are pretty delicate in my experience. Small changes tend to affect them. Also when sick or stressed there clear color becomes somewhat cloudy. It's a little indication that something isn't right. Try to get more of them so you have a school, provide lotsss of hiding places and house them with fish that won't stress them out with fast movements. I wish you the best with everything

Glass catfish are awesome fish,very unique look ,they pretty hardy and need to be keep in groups,another thing is they need is some type of current in the tank as that's where they spend most of there time from what I've noticed floating in the current of water .I have them in my 60 gal tank and they seem to do fine with other community fish.but sometimes they seem skittish around bigger fish.from what ive noticed they seem to like blood worms and tubifex worms more then flakes,but as with any fish always try to give them a varied diet.

They don’t need a current in the tank at all. They live very near the banks of rivers where there’s next to no current, only nipping out into the (slight) current to grab food. Many people think they need a current because they’re always swimming, but they swim ‘on the spot’ in calm water. A strong current will just tire them out.

The African Cats were strange little fish but I set up the tank for them especially and they rewarded me with an eleven year lifespan.

They did like a moderate current and hung out in a group under an arch. At feeding time they were more active and came out to catch the flakes in midwater.

It was important to have a fleet of Corydoras to eat the missed flakes which fell to the sand.

At twilight they would change behaviour and swim individually to every corner of the aquarium quite vigorously. 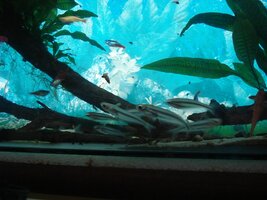 They were totally peaceful but needed pristine water quality. I found them interesting to keep. Obviously they were not colourful and not as amazingly transparent as the Asian species as they had three dark lines.

Not a great pic but you get the idea. 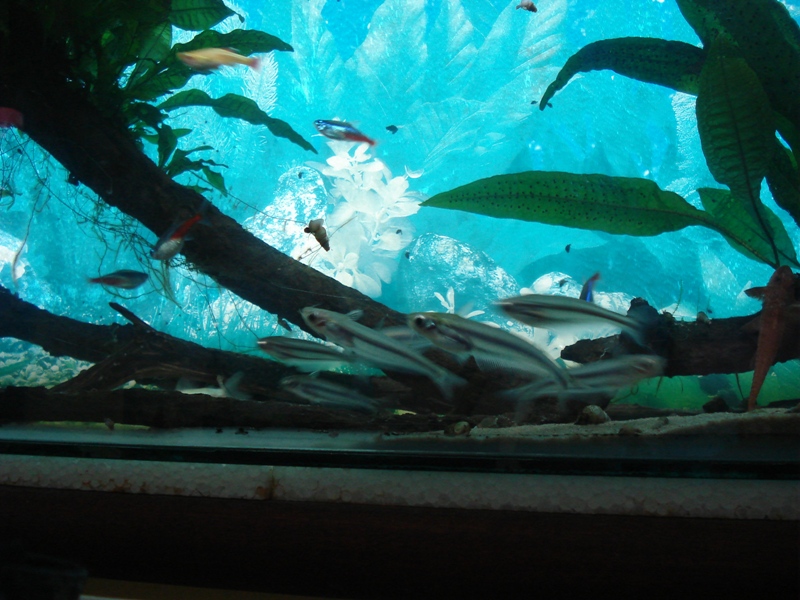 angelfish horder said:
right I was at the store earlier and picked up another 2 so now I have 4 in total they are in quarantine at the moment and they have been in there for a few days and a couple of them scotted out and grabed some bloodworms but apart from that they just hide all the time so what I have read is that they don't do well in a community tank with fast and aggressive eaters is that correct
Click to expand...

Yes. They’re relatively slow to feed and won’t rush out to compete with faster fish.
OP