Getting an assassin snail for MTS problem

I have a 10 gallon planted aquarium at my office. In it I have 70-100 cherry shrimp, 3 amano shrimp, 1 bamboo shrimp (I know it's a small tank for it, but I have really good water flow in it and she appears to be doing very well), 1 mystery snail, 3 nerite snails, and a ton of Malaysian trumpet snails. The MTS were a purposeful addition at the beginning of the tank, as I wanted something to churn my substrate. They bred, but my population has always been kept in pretty good check as I was careful not to overfeed them. However, for some reason in the last month my population has exploded. I haven't increased my feeding, and I feed my shrimp on a couple small glass dishes to keep the food from going down into the substrate, but it seems like all the snails have suddenly figured this out. 15-20 minutes after putting in the food there are a swarm of MTS all in the dishes. I think I'm finally ready to either be rid of them or significantly reduce the population. I've started taking the dishes out at the end of the day and getting rid of the 10-15 MTS in the dish. However, I've always been interested in assassin snails. It seems the jury is mixed out on the internet about whether these will hurt my mystery and nerite snails. Some say they never will. Some say they only will when the MTS are gone. Some say they'll only hurt them in numbers since they'll need to gang up on the mystery snail. Some say they will hurt them immediately.

Anyway, what are your thoughts? If I get 1 assassin snail to prevent the ganging up on the mystery snail, will that be enough to make a dent and control the MTS population? Can a single assassin snail kill a nerite? Should I get more than 1? Should I just forget all about them and just keep clearing out the MTS with my feeding dishes as traps? Should I reduce my feeding even though I haven't increased it and my shrimp population is getting bigger? 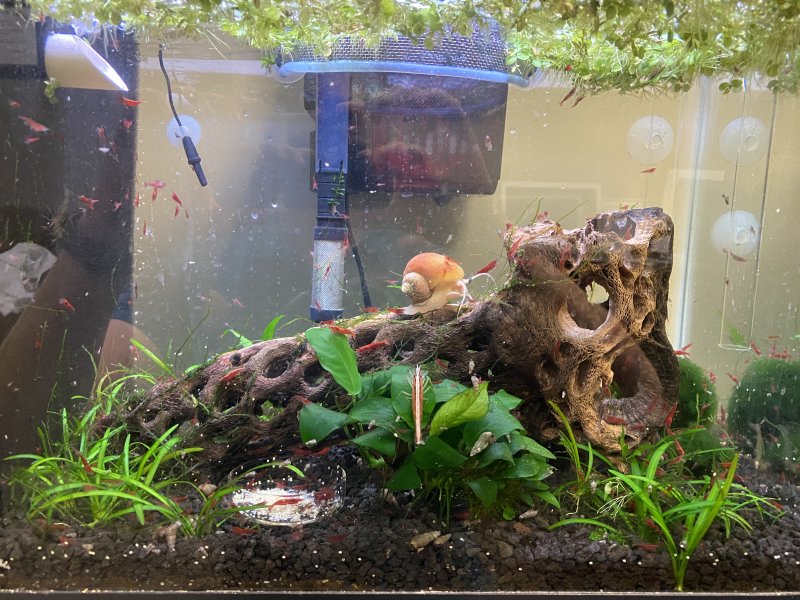 Location
Closer to Heaven every day but for now-Arkansas

I can't answer you question as to whether your mystery or nerite will be safe from the assassin but I don't think one assassin will put a dent in the number of MTS. Assassins only kill to eat and they can only eat so many of them. The MTS will breed faster than the assassin can eat them.

I wonder if your work colleagues have access to the fish food? What about the cleaning staff as well?

I heard that assassin snails sometimes eat baby shrimp, but I’m not sure about 1 assassin snail eating a mystery snail or a nerite.

Is there a local fish store that might take some?
OP

My colleagues and the cleaning staff are definitely not feeding them. I think the snails just have figured out where I feed the shrimp. They never used to crawl into the dish, but they swarm it now.

I’ve also heard of assassin snails eating shrimp, but I’m pretty sure that only happens to sick shrimp as a cherry shrimp can easily run away from one. Even if it did kill one from time to time, it wouldn’t really put a dent in the population.

I’ve read that nerites are hard to kill and take more than one assassin to take down, so they prefer easier prey and will go after the MTS before attempting a nerite. But if they go hungry, all bets are off.
You must log in or register to reply here.
Share:
Facebook Twitter Reddit Pinterest WhatsApp Email Link