Hi everyone, we are just getting into haveing fish and are trying to do everything right so we thought this would be a good way to get information. We have 2 german blue rams one is too young to tell if it is male or female the other one we were told it was male but it kind of has a rosey belly. I don't know how old it is but it's about 1 1/2 inches. Here is a pic can any of you tell? 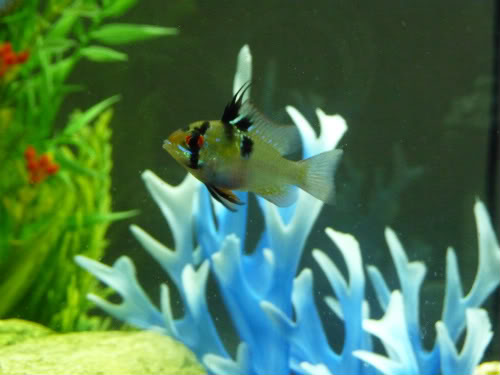 Welcome to Fishlore! With that dorsal fin, I'm going to guess male. What a beautiful boy he is too!

I'm no expert, though, so hang on for some more responses. 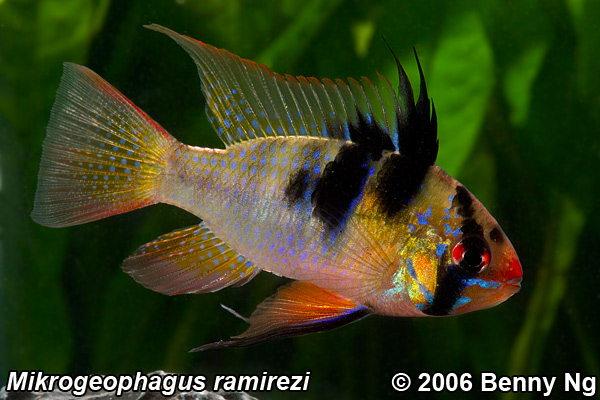 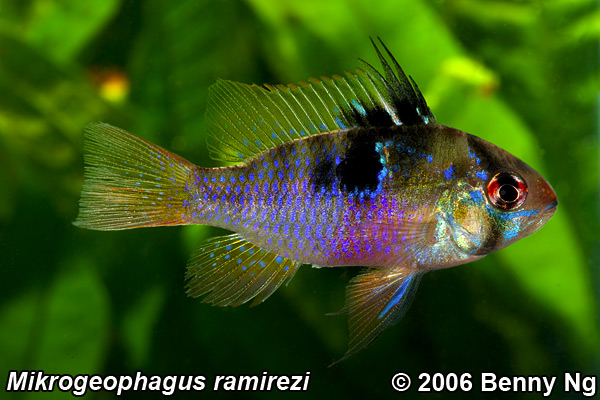 - males lack blue "spangling" throughout their black spot (can be completely black in the middle with spangling around). Females will have blue "spangling" through the spot. (least conclusive)
- in non-longfin variants, the dorsal and analfin of females barely reach base of caudal (tail) fin. (most accurate)
- females have a red/pink belly when they are in the mood to spawn.

i'm guessing it's a male

Hey thanks! thats what we were told when we bought him that he was probably a male, but we weren't positive because its belly was looking kind of pinkish and the end of its dorsal fin is not pointed its more rounded, but maybe that because he is not fully mature yet. We shyed away from getting one at first but we liked him so much and the guy at the pet store was a fish geek and he said they really weren't that hard to keep, just do a %20 water change every two weeks. I also got a master water test kit and am getting pretty good and testing the water. The only part that is kinda hard is reading the nitrate, 20ppm and 40ppm look about the same to me on the color chart. Now the test kit says that anything below 40 is safe, do you guys agree with that, or should it be kept lower with the rams? but like I said 40 looks almost the same as 20 to me.

As a general guide, you 0 ammonia, 0 nitrite, 5-20ppm Nitrate in a non-planted tank. For a planted tank, sometimes you will get 0 nitrate as plants consume the nitrate.

ryanr said:
As a general guide, you 0 ammonia, 0 nitrite, 5-20ppm Nitrate in a non-planted tank. For a planted tank, sometimes you will get 0 nitrate as plants consume the nitrate.

But this is really a question that belongs in the Nitrogen cycle forums
Click to expand...

Thanks, I looked over there and that did help

I have 2 pairs of german blue rams of my own, mine are older so they are more colorful, but when mine were that age, that is what my male looked like. It is easier to tell because of the dorsal fin, in males in is taller in front. I can confidently say that is a male.
You must log in or register to reply here.
Share:
Facebook Twitter Reddit Pinterest WhatsApp Email Link
Toggle Sidebar