So something vile just happened. I was watching the tank, and my geophagus tapajos was at the front sifting sand as usual. The tank he is in is not the tank he was intended for; he started off in my cichlid community tank but he was far too peaceful and was being bullied so I took him out and put him in my peaceful community tank and he's being doing much better, colouring up and growing back fins ect. But, the tank he is in is 90% sand, 10% gravel. I know he is meant to be on sand, the OG tank is sand.

Anyway, suddenly he started going absolutely crazy. He shot out of the top of the tank, hit the lid and came back down. Then he bounced off all 4 sides of the tank, slammed into decor and off of the substrate. Then he stopped dead in the middle of the tank with his mouth wide open and seemed to take a huge gasp before sinking to the bottom upside down. It was absolutely god awful to see, it was like he was suffocating.

So we pulled him up to the surface and inspected, because I think he may have sucked up some gravel and choked? Can that even happen? We couldn't see anything though. There was nothing in his mouth, and I couldn't really see anything obstructing his gills. I don't know what happened. He was a pretty big fish with massive eyes I'm certain I could see the panic in his eyes

I don't really know what response I'm expecting, is it possible that he choked to death on the gravel? What other explanation could there be? He was perfectly happy and healthy.

This is him, and the aforementioned gravel. 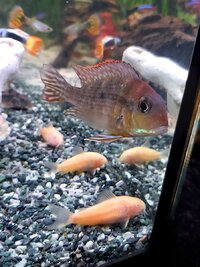 It very well could have been the gravel I’ve had fish choke on gravel before and that’s why I only use sand now. I’m sorry about your little guy
Upvote 0

It is probable that the Tapajo chocked on a piece of gravel. I recently bought 3 Tapajo's myself a few months ago after wanting some for years. All my tanks have pool filter sand and no gravel. I am no expert on Geophagus, but I would recommend to consider changing your substrate.

I had something similar happen to a small Mbuna cichlid that tried to eat too large of a food pellet.

It started behaving similar to what you described, almost like it had labored breathing. I had to net the fish and found the pellet stuck in it's mouth. I was able to dig it out with a bamboo skewer and then held the cichlid in my hand near the discharge of my canister's spray bar.

The fish was alive but extremely lethargic and would not swim, just float. So for a couple of minutes I allowed the discharge of the canister to flow through the mouth and out the gills of the cichlid as I held it. This effectively allowed the fish to "breath".

After a few minutes it regained its strength and it started swimming around normally. I no longer give my African tank pellets of that size anymore.
Upvote 0
You must log in or register to reply here.

SunSun Cannister - UV or no UV, that is the question!