Hey all! I've got a danio with a white fuzzy bump on its side and I am trying to figure out how to effectively treat it. The current suspects in my mind are either a columnaris infection or a sore - perhaps from TB - that got secondarily infected with a fungus, but I'm not sure. Any help appreciated!

Tank
What is the water volume of the tank?: 29 gallons, though it's not totally full so it's more like 22 gallons
How long has the tank been running?: Years and years
Does it have a filter?: Yes, an EHEIM 2211
Does it have a heater?: Only in the winter
What is the water temperature?: Can't use the thermometer on it right now, as it's shared between tanks and I don't want to risk transmission, but it's at room temperature and the air temp is 74 degrees F
What is the entire stocking of this tank? (Please list all fish and inverts.): an abundance of ramshorn snails, five gold ring danios, and three green neon tetras, plus various plants

Maintenance
I'm going to go off template here, because if I'm being totally honest, I recognize that maintenance was probably a contributing factor to this. Due to my pothos plant absorbing nitrates and my snails breaking down organic matter, I hadn't properly changed the water for the past couple months, just kept adding new water (RO buffered with Saltyshrimp GH/KH+) and counting on the tank to recycle the rest. I now realize this experiment was fairly dangerous to the fish, since minerals could still accumulate and organic matter still built up on the tank bottom in some quantity. I did a partial water change and vacuumed the substrate today in an effort to correct the buildup, and will continue these going forward.

*Parameters - Very Important
Did you cycle your tank before adding fish?: Yes
What do you use to test the water?: API Freshwater Test Kit
What are your parameters? We need to know the exact numbers, not just “fine” or “safe”.
Ammonia: 0 ppm
Nitrite: 0 ppm
Nitrate: 5 ppm
pH: 6.6
*These values are after I did a partial water change on the tank today, but I imagine the tank water before was pretty similar, and I doubt the nitrates were any higher than 10 ppm.

Illness & Symptoms
How long have you had this fish?: I've had all the fish in the tank for several months now, they lived together in a different tank before and were rehomed to me last year
How long ago did you first notice these symptoms?: Last night, although it's very possible they were presenting mildly before and I just didn't notice due to the fish being fast-moving
In a few words, can you explain the symptoms?: Raised white fuzzy bump on side, possible red discoloration around bump (can't tell), pale poop
Have you started any treatment for the illness?: No, although I isolated the affected fish to a different established tank that has no other fish
Was your fish physically ill or injured upon purchase?: No, though I think it's always been rather scrawny
How has its behavior and appearance changed, if at all?: It's still eating and behaving mostly normally, but it hovers in place more often now and its colors are duller. I think it might be skinnier, but I'm not certain.

Explain your emergency situation in detail. (Please give a clear explanation of what is going on, include details from the beginning of the illness leading up to now)
Last night, I sat down to feed my fish and noticed one of my gold ring danios was passing a very proportionally large pale poop. Upon closer inspection, the fish just seemed distressed/uncomfortable - I can't really describe what I'm picking up on exactly, but it's somehow just visually apparent that the fish is sick. I noticed that it was looking very skinny, though I'm not sure this is a new symptom, as a couple of the danios have always seemed pretty thin. In addition, it had lost its sheen somewhat, and appeared more faded than the others in its group. I also thought its spine might be bent, but I'm not confident that's actually the case: it kind of looks like its spine curves slightly upwards, with a slight peak in its upper back and its tail drooping down a bit, but all the danios seem to have slightly curved backs and this one also seems to have its dorsal fin either clamped or eroded, which could be causing me to read its shape as unusual. It was mostly staying in place near the top of the water, and seemed to be rather weaker than the others, as it was swayed more easily by the filter current. However, it ate normally, and didn't seem to have any sort of diminished appetite.

This morning, I was happy to find it still alive and swimming, so I scooped it out of the tank and put it in an established, clean tank whose only inhabitants are shrimp (hopefully for recovery purposes, more cynically because I feared my others might eat it if it died and get sick too). In the brighter light and clearer water of the isolation tank (the original tank is heavily stained with tannins), I noticed that it had a large, fuzzy white bump the size of a pinhead on its side, with a smaller bump slightly behind it. I think there may be a slight red discoloration around the bumps as well, though it's hard to be sure. I think it's possible the bump was there last night as well and it was just mostly angled in a way that I only saw its non-bumpy side. Anyways, I think the bump has grown today, and while its behavior has remained stable and it's still got an appetite I'm worried about what might be behind all this. It seems like the culprit is probably either latent TB, brought out by slipping water quality and potentially old age, causing sores that became infected with Saprolegnia, or an early manifestation of columnaris. All the other fish in its original tank seem to be doing alright, although one of the tetras had been hiding by itself more over the past few days - as far as I can tell, though, none of them have any lesions or similar issues.

If anyone has any ideas, I'd really appreciate the help!!

Pics:
This first one is from last night. You can't really see the bump, though I think there may have been discoloration in the area. 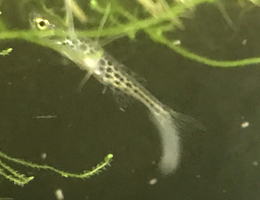 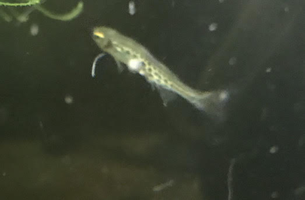 Update: the bump is pretty much gone today, and the smaller one that was behind it is larger now. In its place is a red, sort of raw looking area.

That points to Columnaris, right? It wasn’t my impression that Saprolegnia grew or receded particularly quickly.
Upvote 0

Update: the fish is still looking not super good. I’m really hoping he’ll pull through somehow, but I’m worried. There’s another fuzzy patch growing a bit behind where the original one was, and it looks like maybe a sort of grayish-white flat patch above the nearby fin. I’m also pretty convinced his spine is somewhat arched now, and his shape in general with the slightly protruding head and all doesn’t look entirely unlike TB. I’m feeling really frustrated because I still don’t know what’s going on and I don’t just want to chuck antibiotics at an unknown problem and make things worse, but it feels so helpless to just do nothing. Hopefully I can give y’all a more positive update soon.
Upvote 0 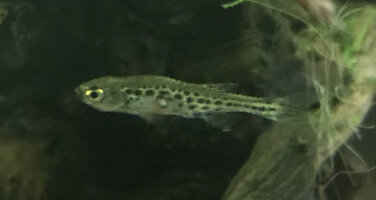 Some photos of his current situation! I feel like you can see his shape v well in the second one, even if the redness and the white bump remain difficult to accurately capture.
Upvote 0
You must log in or register to reply here.

Molly has a giant white cyst on fin