Vern
I recently installed a new heating system in my house that has a hose that carries condensed water vapor to a drain. The water has around 50 ppm and has a ph of about 5. Does anyone have experience with this water? Ideally I would use it to soften my tap water some which is close to 200 ppm, and to bring the ph (7.8) closer to neutral, or even slightly acidic to maximize the pink/red colour in my Pristellas tails (so I've read). The colour has been fading slowly since I purchased them about a month ago and would like their tail colour to come back.

Any input would be greatly appreciated. In theory it is a good idea, however I wouldn't want to stress or kill my little fishy prisoners by introducing harmful contaminants into their cell (aquarium).
TexasDomer
Welcome to Fishlore!

I wouldn't use condensed water just in case it was contaminated by some surfaces.

There may be another reason for your pristellas' color change. We can help you investigate that if you're interested!
Vern
Thank you, this site has been an invaluable resource as I get back into the hobby.
50 ppm is for the TDS. I currently use the digital TDS meter that came with a Zero Water pitcher. All other readings I get are from dip strips. Currently use my nose to detect ammonia as it is super sensitive to it, however I know this isn't an exact science and plan to get a proper kit next month.
I will post other parameters once I'm home and can test the water. But going from memory the aquarium ph is about 7.8, and the TDS are 300+.
What might be some causes of the colour loss besides hard water and ph being on the high side (for the species)?

Thank you,
Vern
TexasDomer
Yeah, unfortunately your nose isn't near as accurate as a test kit - even with a super sensitive nose, ammonia would have to be dangerously high for you to detect it (most any ammonia is dangerous to a fish though). Liquid test kits are usually more accurate than strips. If you are in the US, API makes a good freshwater master kit.

TDS isn't always super helpful, so I wouldn't worry about it unless you are keeping very sensitive fish or inverts.

Poor water quality (the presence of ammonia or nitrites, or high nitrates) or stress (from a variety of sources) can affect fish coloration. Inter- and intraspecific behaviors can affect coloration too.

Can you also post a pic of your tank and list your complete stocking, in addition to providing water parameters?
Vern
Ok, so I used 3 dip strips and this is what I got.
Nitrate 0
Nitrite 0.25
GH 300
KH 180
PH 7.5

I double dosed with prime for the nitrite, then dipped again an hour later. The only change was in the KH which seemed to drop to 160

My tank is a 36 gallon bow front, which I consider a 30 gallon due to decorations and gravel. I will take a picture after the lights turn back on.

I have 10 pristella tetra that remind me of little piranhas when it's feeding time, and 3 albino cory that are just as entertaining with their sudden uncontrolled bursts of speed.

I also discovered that the heating system condensate is dilute nitric acid due to how the heat and atmosphere react with the water vapor, in some cases the liquid can be as low as 1.8PH.... if I wasn't already convinced not to use it, I sure am now. Many municipalities have banned the drainage of this liquid unless it has first gone through a neutralizer because it corrodes almost any metal it makes contact with.
Vern
As promosed. 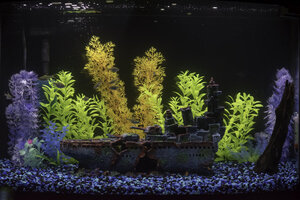 I also looked into the behavior bit and wonder if this may be why the 11th tetra, who had the brightest tail, died.... or maybe even killed?
TexasDomer
I'm not convinced he was killed because of the brightest tail. Usually brighter colors signal good health, and these fish wouldn't be picked on.

However, having nitrites in the tank could easily be the reason why your fish died. Nitrites are very toxic. I would invest in a liquid test kit and keep a close eye on water parameters, doing water changes whenever you see nitrites.

Once your tank is fully cycled, I'd add some more of the same species of cory - they should be in larger groups, and they appreciate friends
Vern
So I finally picked up the API master kit a few days ago. Results have been showing high nitrate and nitrite, with ammonia hovering around 0.25 ppm.

Previous to this, I seemed to be losing 1 Pristilla per day due to what appeared to be a fungal infection, maybe dropsy. Only 2 appeared to be infected at any one time, but to even see that there WAS something wrong was very difficult aside from them flashing off the ship. I grabbed what appeared to be the worst 2 and put them in very salty water for a 10 min dip. I also gradually added aquarium salt to my main tank over 12 or so hours in hopes of preventing further infection.
Once I made the change to using aquarium salt the infection stopped spreading, however the corydoras did not survive the transitiuon to salt.
I am now left with the 5 largest Pristellas.

I have been doing 10 and 5 gallon water exchanges, depending on how whacky the numbers appear to be.

Any further suggestions mayhaps?
TexasDomer
Larger and more frequent water changes to keep ammonia and nitrites as close to zero as possible. As you've found out, salt will hurt cories, and shouldn't be used in the main tank as a cure all. Your fish were likely dying from the ammonia and high nitrites.
Vern
To be fair I had the salt anyways to use as a preventative measure, just had not yet started using it, this gave me a fairly good reason to, at least, perform an experiment.

I should state that, while I said I removed 2, the second one was still rather lively and got squished between the net and glass. Poor guy was totally F'd after that and did not recover. I then decided to stop trying to catch and quarantine them.

The one I didn't squish is still alive and as active as any of them, just more transparent. It looks as though I dipped it in bleach (I assure you I didnt) rather than salt water, sure makes em easy to identify though.

Since the deceased only showed sign of ailment with a mucous like growth which seemed to cover their entire bodies, I am convinced a fungal infection is the direct cause of these particular deaths. This also helps explain the colour loss I originally posted about.

Today I did a 50% change, I had been alternating daily between 5 gallon and 10 gallon or around 17% and 33%.
TexasDomer
Fungus will grow over dead fish, so unless it was there when it was alive, I wouldn't say that's the issue.
Sion

I recently installed a new heating system in my house that has a hose that carries condensed water vapor to a drain. The water has around 50 ppm and has a ph of about 5. .
Click to expand...

pH 5 water that have passed through a heating system will likely contain copper, I wouldn't use it if you have any intention of putting invertebrates in the tank.
Vern
So how about using nitric acid? I've seen sulphuric acid sold as a ph reducer.
The condensate piping is all pvc, so I don't think copper should be an issue.
Maybe I'll get another tank to experiment with, who knows, maybe I'm on to something.
Vern

Fungus will grow over dead fish, so unless it was there when it was alive, I wouldn't say that's the issue.
Click to expand...

The apparent fungus was growing on live fish. Anyways they're all seemingly healthy and happy now. I added a Dwarf Flame Gourami who frequently schools with the Pristellas, cute
TexasDomer
You don't need to change the pH - your pH is fine. I wouldn't try to change it with nitric acid. If you absolutely must change your pH, do it in a safe and proven way - cut it with RO water, or use straight RO water with appropriate buffers (other acids aren't necessarily equivalents, or as stable to use for controlling pH in aquarium water).