Here's a story about my friendly lonely cory.

I bought two young emerald corycats and two young peppered Corycats for my 10 gallon. A few weeks ago one of my emerald cories died. Water tested perfect, he didn't look sick and the only other species of fish are my neons so I don't believe it was due to fighting. Anyway, my Emerald has been by himself with the peppers for a while now and has outgrown the peppers by quite a bit. The peppers hang out by themselves which leaves my emerald by himself. Before too many of you tell me Cory's need to be in groups of 5 or more because I already know this, I was worried about adding more due to I couldn't figure out the reason why the first cory died and didn't want to kill anymore.

Now, in my 29 gallon, which has a gravel substrate, I noticed one of my five Leopard CoryDoras had barbels worn away and his mouth looked white and puffy. I'm not sure why. But I have moved it over to my 10 gallon which has sand substrate in hopes it will be easier for him to find food to eat in the sand.

As soon as I put the Leopard into the 10 gallon, my emerald went straight over and rubbed on him, nudged him and swims with him and hangs our with him. Obviously, the Emerald was very lonely. The Leopard and Emerald are the same size whereas the two peppers are still fairly small. I've heard that corys of different species don't really care for each other, but after several days the Leopard and the Emerald are still very close. The emerald has even gotten the Leopard to come out it's lethargy and I've seen it digging in the sand.

So long story short, my Emerald doesn't seem to be lonely anymore and he has seemed to cheer up my Leopard and is helping making him feel better. At least I hope so.

Maybe I need to use some kind of medicine to help the Leopards barbels grow back, if they will grow back at all.

Any advice would be appreciated.

Ive had similar events. I had an adult emerald with an albino bronze and a juvenile pepper all moving together and slleping in a pile even though they were n a 55 gallon. I suspect that they are more lke dogs and adopt similar types, but don't need exact breeds.

I like your comparison to a pile of dogs. I haven't really seen the small peppers joining the dog pile but they seem happy just hanging with each other.

Any idea on what to do to help fix the leopard cory's mouth?

It sounds like he's damaged his barbels on the gravel, keep an eye on him for any fuzziness or redness in that area as it could become infected, in the meantime keep the water pristine.
Depending on the damage the barbels should grow back to a degree but they never seem to go back to their former glory

There's no red but it is very white and puffy. I will try to get a snapshot. 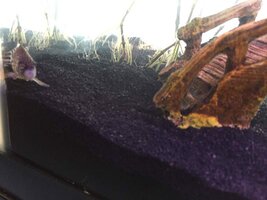 This is the best shot I could get.

That doesn't look good, can't see from the pic but is it fuzzy ? If so then a fungal med may help but even with treatment I doubt there'll be any regrowth so the outcome may not be good

It doesn't look fuzzy to me, but it seems to be getting a little puffier each day. I don't have a separate quarantine tank, just that one and my 29 gallon. Is it safe to medicate the water with my other corycats and neons in there, even if I mildly dose it?

Quick update: the corys mouth is no longer white and puffy but back to it's natural shape and dark color. There aren't any barbels yet (maybe never), but I feel he is doing so much better since I moved him into the 10 gallon.

That' great news.
Besides upgrading the tank, did you do anything to help him heal?

I didn't put medicine or anything in the water. Just kept it clean and it has a nice soft sandy substrate. When I noticed it in the 29 gallon gravel tank he would hide and didn't hang out with the other corys.

Thanks!
Hopefully this will help others who may run into the same issue.

Thank you thank you!

What Kind Of Silicone Should I Use To Reseal Aquarium