This is my first post so I figured I'd share something useful . There's not a lot of information available on nitrate reactors for Freshwater but luckily they are heavily used in Saltwater tanks so most of the concepts can be used. I have a 75 gal mixed peacock cichlid tank with a messy pleco and am constantly trying to keep nitrates below 40 . My goal is have to do a %30 partial water change only once per week to replenish minerals.
After some extensive research I build this ugly thing which is a simple design, a 6 foot tall 2" pipe that can be slowly and constantly recirculating and bleed out water slowly. In order to do this I split off the output of my own DIY 650gph canister filter with 1.5 gallons of matrix.( I can post more about that if anyone wants to see how that works) I figured the airaerobic bacteria in the main canisters would help deplete some 02. Then I ran 150 foot of small 1/4in irrigation hose I picked up at home depoe for 10 dollars. I left it in the prepackaged coil so it fits nicely out of the way. I figured this would remove most of the 02. Then had a T with one side of the re-circ and the other side going to the pump, the pump which I used a 12v dimmer switch to control fed directly to the 2" pipe which was filled with a gallon of seachem denitrate. Then a bleeder at the top which I originally intended to use only for bleeding air but actually controls the water output much better than the one I designed. Once I had it all running I injected 10 oz of stability every day for 4 days and let the water recirculate over night, After 6 days of the filter running I am currently moving 18 gallons a day with my nitrate input at 25ppm and output at zero ppm. Overall the cost was about 200 dollars but you could cut 50 dollars of that using pummice or some other bio media instead of the de*nitrate. I put some pictures below and can upload more if anyone is interested, I need to do some organizing of wires and hoses when I get time so just ignore them for now. 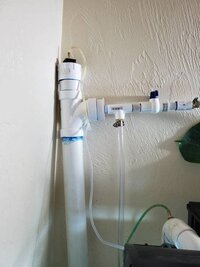 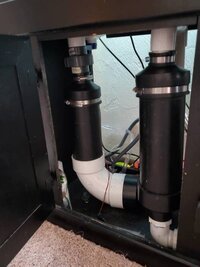 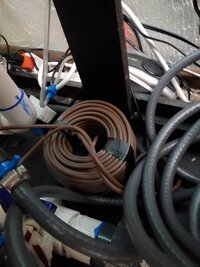 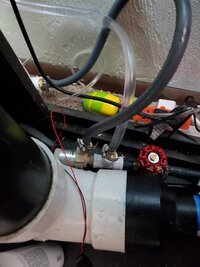 thanks for sharing. that's a nice setup you have.

Tried going to 22 gal per day and after 2 days the whole thing crashed and went into swings. Varying with an output from 30ppm( tank level) to 5 ppm even when I backed off to 18gal per day. So I think the bacteria may have consumed all of the available carbon in the water. (I might be wrong). Ive been injecting 5ml of vodka every 3 days and it really seemed to smooth it out though. I'm back up to 20gal/day and running with an output of 0ppm and input of 15ppm and the tank nitrates seem to be steadily dropping. I plan on lessening the vodka dosing to 3 or 4 ml every week once my nitrates drop to roughly 5ppm to prevent bacteria slime build up as well as an chance of hydrogen sulfide. Since we don't have skimmers it is easy to overfeed the bacteria in the reactor and create excess in the form of a nasty slime. Compared to the 4 to 6 week break in cycle time most people experience, mine has been starting to dial itself in after week 2, fingers crossed for a stable output of 0ppm and 22 gal per day by next week.

Not going as smoothly as I hoped, vodka dosing is working great but seeming to only last about 24 hours per 10ml dose before nitrates starting rising out of filter. My main concern is dosing too much and causing bacterial blooms which can cause large problems and potentially hurt fish. I am conceding trying injecting 5ml twice a day on a timed injection pump.
My nitrates have been holding at 20ppm with water changes every 5 days so I am making progress.

Running smooth with 0ppm output at 15gal/day. Dosing 4 ml vodka twice a day.
Tank is sitting steady at 5ppm nitrates with weekly water changes. I have been slowly backing off the vodka and water flow through the reactor to see what's the minimum dosing I can do with zero nitrate rise. Noticing a small amount of heterotrophic bacteria slime in my main filter when I clean it. So too much vodka is escaping the reactor without being processed.

This is reslly interesting, I'm subbing to see progress.

I am genuinely impressed by the know how and the diy ability. That said I don’t understand anything even though I tired too.
That’s not true: I absolutely understand about dosing vodka!

The way I think about it is that's it's the last step in the nitrogen cycle in our tank. It's similar to the bacteria that turn your ammonia to nitrites then so on. It helps I have a background in septic treatment and am currently in college for civil engineering. So I can use a math to control the pumps and have done a lot of plumbing. But overall all you need is anaerobic water and some carbon food(vodka) and the bacteria will do there thing. If you ever want to give it a shot feel free to ask questions, it only took about 2 hours for me to build.

For an update, things have been smooth after I started injecting 3ml vodka per day. Nitrates have been holding at roughly 7 to 10ppm with no creep and less slime. Reactor is set to output to 14 gal per day. I clean my mechanical filters every 3 days to help control slime but it seems to be going away.

Still running smooth, tank holding between 5 and 10ppm with weekly %25 water changes.I am still messing with the injection amount slowly bringing it back up to around 4ml, my morning injections arnt precise since I'm usually in a hurry and not fully awake. The slime is gone and I haven't touched my tank filters all week. So I think I am closing in on the perfect dosing amount.


Just picked up a 180 gallon tank with a 40 gallon sump I will be cycling over the next two months. It's going to be a large predator hap style tank. If anyone has a unique hap they recommend let me know.
I plan on building large scale nitrate reactor at some point when the funds and time are available.

Nitrates are sitting at less than 5ppm now with 4ml dosing. This will be my last update unless something goes wrong. Hopefully someone will find all of this information useful.