Found lovebird in life or death situation at LFS. They were doing NOTHING!

Hello everyone I'm here to share the story of baby Twitch. I found him yesterday at MONFORT Aquarium and Pets (In Colerain, OH).

I only was even in the store because I was on my way to the Apple store for a replacement iPhone and we were early and I wanted a new betta. As soon as we walked in I saw the little window to the bird room, that's when I saw him. I could tell he wasn't feeling good at all. There was a couple other lovies there and they were cremes and so sweet little babies so I had to at least play with them.

When I went in there the other babies were oh so sweet. I asked them about the little guy who wasn't feeling well. She said his foot got caught in a toy and his siblings started attacking him. She told me this happened TWO-THREE weeks ago. She also told me he was probably going to have to lose his leg. I assumed that meant he had seen a vet about it. I asked if we could get him out and at least play with him and the lady said she wasn't sure if he was allowed out. That's when I noticed just how bad his foot actually was. There was bone hanging out and everything. I then asked if he had seen an actual vet. She said no. I asked about purchasing him and talked to the owner about it.

His first comment to me was "well how much is a one legged bird worth to you?" I was pretty ed about that to be honest. Then he told me $70. I told him I'd probably be back on Monday to get him. Driving away we didn't make it more than a mile down the road before I wanted to turn around and get photos of his leg and bring him home. I got back and bought him trying to stay as calm as possible so I could get the bird out of the situation. After I got in the car I started calling vets. I don't know if anyone knows this already or not but it is almost impossible to find a vet that will see a bird on a saturday evening. I ended up driving about 30 min from the pet store to find a vet. Sat in the vets office for 2.5 hours, he ended up getting a pain reliever shot and a antibiotic. He has to go into my avian vet on monday. He is probably going to lose his leg if not his life.

I was not planning on another bird at least until I moved in the summer. I actually only had $20 to my name when I found him. I ended up buying him with the money my parents gave me to replace my iphone. So far his costs are up to $230 and I haven't even gotten to the real vet which will more than likely be removing his whole leg. I am asking for donations for his vet care. All I want to do is help this baby get better and give him the life he deserves!


To help with twitch: 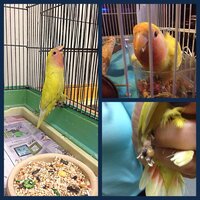 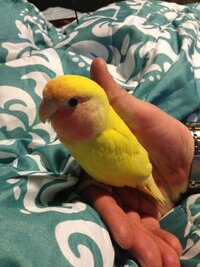 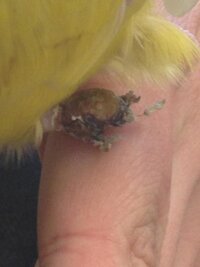 He is a very pretty bird! I hope he only has to lose.a leg and they can save him... Some lfs shops I just hate with a passion... If I had the money I would defiantly donate to help you out... Thanks for saving this bird he.deserves a loving home!

I went in because it had good reviews on google and I wanted a new betta lol!

He's probably losing his leg. Hopefully he makes it through surgery. I will know more tomorrow. I posted here more to get the word out than anything.

I would absolutely love to donated! My computer has been acting up lately, but I'll try!

Is $5 okay? I feel like it is small, but I don't have much after my nano tank!

You probably should have called the humane society -_-;;
Glad you have him, though.

So handsome, I will say prayers for your little one.

Thank you everyone. I am calling the humane society after I have a report from the vet that way I have reports from two vets and I'm going to the news, authorities and anyone who will listen.


Any amount helps! Even just sharing the link to the fundraiser in other places helps!

How kind of you to help this beautiful bird.

You probably should have called the humane society -_-;;
Glad you have him, though.
Click to expand...

Personally, I still would call them. There is absolutely no reason for a bird to suffer like that. If the pet shop had sought immediate medical attention, the poor little fella's leg would probably be fine

You got some of him in the store itself, I take it?

Next time call them right away, so they have indisputable proof that the bird belonged to that store.

You should make twitch a facebook page so you can some help with his medical bills and id also mention the rude comment the man made about how much its worth...pfft poor birdy

If you follow the link in the first post its a page set up just for him. The whole story and photos are on there. There is a donation section of it as well.

I am off to the vet's office now. I'll return with updates!

Here's a little updated photo of Twitch (the lovebird saved from the petstore). He doesn't let anything slow him down, even a bum leg! He's eating and drinking well and contact calls back and forth with my other birds (he's in quarantine so he's in the other end of the house, but they can still hear eachother)

The vet cleaned up his leg and removed the scab that had formed because it was actually constricting his foot causing more damage. The vet put a bunch of antibiotic ointment on it and gave it lots of padding and wrapped it. Then he gave him a long term antibiotic shot which also has a painkiller in it that will last about a week. I have to take him back in two weeks to remove the cast. We're hoping it heals up nicely by then, if not he may have to lose the whole leg ): 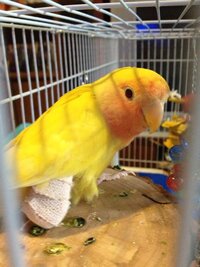 Beautiful story...thank you for rescuing this lovely bird.

It takes a great person to do what you did and I applaud you for doing what you had to do. Thank you for being a guardian/protector for those who don't have a voice on this earth.

Found another LFS, will NEVER go back