I have a 75 gallon tank which I bought used along with the filter.
there is about an inch of gravel and 3 live plants and a few large ornaments. after I purchased the tank used I made a mistake by washing out all the gravel and ornaments. I did not wash out the filter at the time but I did leave the canister filter with water in it for a few days because I did not have time to set up the tank right after I bought it. I then filled my tank with dechlorinated water and some salt, I hooked up the canister filter and a bunch of nasty pollutant came out of the filter and entered my tank. I left the filter to run for a day until the water filled up and I added my fishes.

a few days later my fish seem to experience ammonia stress, they all came up to the surface to breath. at that point I did a bit of research and found out I have an ammonia problem. I went down to the pet store and they sold me every type of treat me there was. I bought ammo-lock, live bacteria, activated carbon replacement for the filter, ammonia rocks (that filter media that removes ammonia), ammonia testing kit and some more stuff I probably forgot about.

while I was putting in the new filter media I foolishly decided to wash out the canister filter with tap water. I left the tank running with my fish for about a month doing regular 20% water changes. and I did not see an improvement in my ammonia testing. just recently a week ago I had a bacteria bloom problem, the tank was very cloudy with what seems to be bacteria. there was a oily film at the surface of the water. I was worried about my fish so I move more than half of them into a smaller established tank temporary and continue to do 20% water change every day sometimes e very other day and my tank became clear after a week. but my ammonia testing still show a very high amount of ammonia. about 4.0. I knew this was serious but the temporary tank was much too crowded so I moved the fish back tot he 75 gallon tank seeing how the water had cleared up. several days later the cloudiness returned and again I am faced with the bacteria bloom. I do admit my tank is a bit over stocked but I don't want to give up any of my fishes. now I am reducing the feed and doing 10% water changes daily. my fish seem to be pulling out some of the leaves from my plants and some of the leaves turn brown. should I remove the plants entirely?

how do I fix my problem?
would it help if I add in water from my established tank?
should I add more gravel?
should I buy a second filter?
Do I need to change any other filter media in my canister filter?

The water itself doesn't really carry beneficial bacteria in it, although it never hurts to use it to help start up a tank, in my experience. Unfortunately, the decor and gravel would've carried bb for you but that's been cleaned.

I wouldn't put in any of the hocus pocus products you received. I think at this point, you'll end up with a bigger problem.

Do NOT change your filter until we can see whether or not you're cycled.

What exactly are your readings: ammonia, nitrite, nitrate, pH?

And what test kit are you using to get your readings with?

What do you have for fish?

Welcome to the site. Oily residue on the surface is not bacteria, you should try to skI'm it off if possible.

Did you use any type of detergent/soap when you were cleaning things off?
OP
L

my ammonia reading is currently about 4.0
I am using an API testing kit.
last time I checked my pH was around 6 (need to test again) and I was using a API kit.
I do not have a nitrate or nitrate testing kit.
I have 2 medium bala sharks, 3 small plecos, 1 jumbo gourmis, 6 small tiger barbs, 2 snails, 3 feeder gold fish and about 15 small 1/2 inch fish that came with the tank (I don't know the species)

You want to get your ammonia level as low as possible as a starting point. between 0-1 is a good target, although even a level of 1.0 is stressful.

From your current stocking list you are pretty overstocked, but if they are all small then for now the bioload *should* be manageable, but definitely reconsider your stocking plans after looking at a few of the fish profiles of what you have.

Can you post a pic of the unknown fish? We can help you ID it.

You're not using the API master kit, right? Are you using strips?
OP
L

LyndaB said:
Did you use any type of detergent/soap when you were cleaning things off?
Click to expand...

No detergent or soap, I rinsed everything out in hot water then again in cold tap water before I added anything to the tank. its not really oily its more like a thick transparent layer on the surface o the cloudy water. I always skI'm it when I do my daily water changes but it shows up again several hours later.

update: I also added a sponge filter and 2 additional air stone to the tank to help my fish.
OP
L

Can you post a pic of the unknown fish? We can help you ID it.

You're not using the API master kit, right? Are you using strips?
Click to expand...

its not the master kit but I bought the PH and the ammonia testing kit separately.

I have ph stripes (aka litmus paper) but I choose not to use them because they are in accurate.
instead I use the one with the drops

This is my tank currently as it is. it is actually less cloudy because I just did a water 10% change. and yes it is very over stocked. there are about 10 of those small redish fishes in the tank.

oh and excuse the breeder in the middle I had it there because one of my fish seemed to be targeted and attacked by the other fish so I had it in the breeder. I just released it this morning back into the tank. 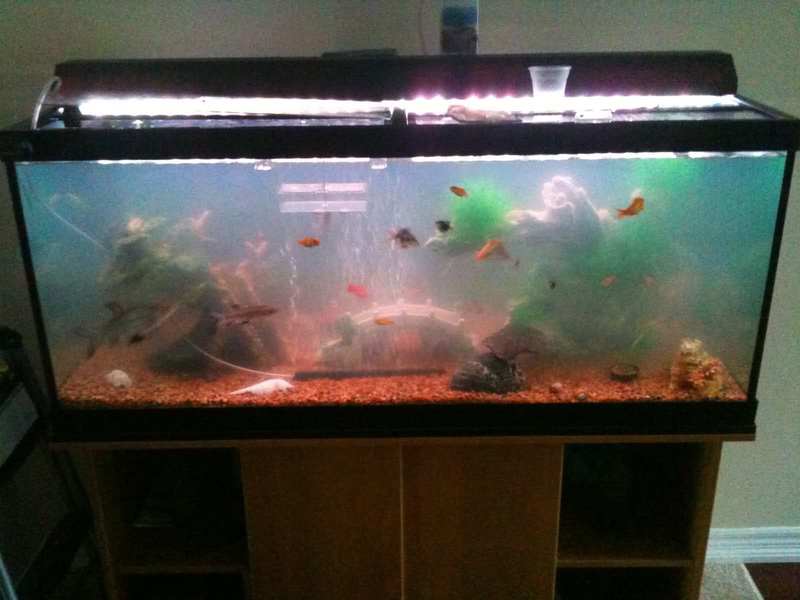 this one shows the nasty substance at the surface of the water. note the bubbles are from the air stone releasing buble which are then trapped in the layer at the surface. is this a bacteria bloom?

If you are wondering about that tall container at the top of the tank, it is a small DIY filter I made to help the process.
OP
L

Correction: the brand of my pH testing kit is hagen, it shows a pH reading of 6.5
OP
L

Any one have any word of advice?

update: I just did a 10% water change and added 8 ammonia dissolving pellets. hopefully that will work

Good morning and to Fish Lore!

Congrats on the new tank!

If you would be so kind, please complete your Aquarium Profile Information. It will really help others with their responses. You can access the Profile by clicking on My Settings in the blue bar close to the top of the screen. In the drop down box click on Edit Aquarium Info. Once it's completed, be sure to hit SAVE at the bottom of the page.

First I would start with daily water changes of 30 to 50%. Add your Ammo-Lock and this will keep your fish save for 24 hours until it's time for the next water change. Keep up with the daily water changes until you have 0 ammonia, 0 nitrites and under 20 nitrates. At this point your tank is cycled.

I would not use the bacterial additive you were sold unless it's Tetra Safe Start (TSS). Too, I would stop using the ammonia dissolving pellets (your ammo lock is all you need).

It would be a great help, especially in the beginning to have a test for nitrite and nitrate (also sold separately). Too, you may want to look into the API Master Test Kit (liquid not paper strips). If the Hagen Kit has the tests for ammonia, nitrite and nitrate and pH by all means use it. No need to waste it.

Goldfish are a temperate species and it's not recommended to house them with tropical fish. Goldfish are large wast producers too.

For future reference you may want to look into water conditioners called Prime, or Amquel + and Nova Aqua + in combination. These chemicals do more than the Ammo Lock.
https://www.fishlore.com/aquariumfi...the-best-products-if-cycling-with-fish.61238/

It's going to take some effort on your part to keep these fish alive. Once your tank is cycled it will be much easier.

Bacterial blooms are common in new tanks up to one year. It will eventually go away on its own:


There is no need to be adding salt to your freshwater tank. It may do more harm than good.

thanks but should I do gravel vac as well?
and I always thought that salt will help the nitrification process

my profile is updated

Until your tank is cycled I wouldn't do a heavy vacuum. If you have food molding on the bottom, you can vacuum lightly. Remember that beneficial bacteria needed to sustain the cycle is also in your substrate. Beneficial Bacteria is on all surface areas with the highest concentrations of it being in your filter and your substrate.

To my knowledge salt doesn't do anything for the cycling process. Too, once your cycled and you begin to add fish, the salt may do more harm than good. Link on salt below:


Thanks for updating your profile. I appreciate it

just an update on my tank, the bacteria bloom is nearly gone, I can finally see the back of the tank. and I can see all my fish. the layer of slime at the top is completely gone and there is just a fine haze in the water which I expect to dissipate in the next few days.
I also accidentally gravel vac my tank before you replied tot his thread.

I'm glad to hear that your water is clearing! Keep an eye on your readings and keep us posted.