Foggy stuff hidden on and under tank decor

I removed two decorations that seemed to be plagued by these strange floaters (they really do kind of look like eye floaters, only in a tank) and two more that might be a potential risk. I'm worried it's either paint coming off of them (I really should've been more mindful picking out decor, learned my lesson) or something else I am not aware of.

I did rinse them before putting them in initially, and treat the tank with a water conditioner after adding them. I just did a water change and right after refilling the tank I saw this. Anyone know what it could possibly be? Is it harmful? The tank is still going through a fishless cycle (I think it's stalled because of too much ammonia for such a small tank, which is why I did the water change).

I don't like bumping posts, but for the sake of adding something I should say I did remove what I could with a net. I wish I could get a picture but I have no idea how to transfer images from phone to computer.

I found two images that look exactly like the stuff in my tank. I didn't take these but I'm confident it's the same stuff. 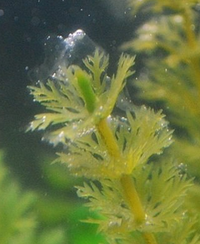 I'm wondering if it's young hair algae after many differently phrased google searches. I'll stop bumping this as I am about 60% percent sure that's what it is.

I realize I should've put this in a ID board and I apologize for not doing that initially, I was just panicked and decided to go for the general board because that didn't occur to me in the first place.

It looks like a white algae that common in new tanks it likes wood and ornaments, if you touch it it seems to disperse, I can't remember the name but its harmless and will siphon out as well as go on its own
Upvote 0

It looks like a white algae that common in new tanks it likes wood and ornaments, if you touch it it seems to disperse, I can't remember the name but its harmless and will siphon out as well as go on its own
Click to expand...

Thank you, I was really anxious about it.
Upvote 0