SncPlsMick
I recently picked up a few Yellow Rainbow fish and one had a barely noticeable, what I thought was a light wound, mark on his/her side. Well a day and a half later and the fish was missing the flesh going up from the area near it's vent up it's side to the top fin. Not too sure but there may have a been a red line or two near the area like a showing vein or something, was hard to tell as the flesh was pretty irritated and eaten up looking very much like how a dead fish that's been chewed on by tank mates will look after a few hours but nobody had been attacking it. 24 hours later and I've lost a Dwarf neon rainbow and two other tank mates to the same thing with no obvious behavior signs or warnings otherwise. Do not currently have any pictures but if anyone else ends up affected I'll post something asap. I do a 50% water change once a week, 55 gal tank and no nitrites, nitrate, or ammonia. Moderate alkalinity and somewhat hard water with a PH around 7.2. Any advice or ideas on what this could be would be greatly appreciated! So far nobody else in the tank is showing any signs and all look good. I'm about to feed and see if everyone is still acting alright and/or any signs.
Triston Wasmund
A PICTURE is very much appreciated for the upcoming people coming to this thread. Unfortunately, I am no disease solver or anything but just a heads up to help the guys who can help you out.
SncPlsMick
I instantly regretted not getting a pic of the one I just flushed as it would have been a perfect example. Hopefully I won't need to post a pic up but like I said in my OG post I definitely will in the future if anything else shows up.
Triston Wasmund

I instantly regretted not getting a pic of the one I just flushed as it would have been a perfect example. Hopefully I won't need to post a pic up but like I said in my OG post I definitely will in the future if anything else shows up.
Click to expand...

Ooops, didn't read the whole description. My bad. I am sorry for your little guy, but it sounds that you did everything you could or at least attempted to. I hope you don't feel to bad, as it sounds to me like he is out of misery now. Hopefully this is something you can learn a bit from, as well as others.
SncPlsMick 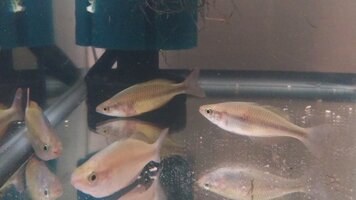 so the one at the top near the sponge filter has it now. I pulled them out into a ten gallon isolation tank and am treating with kanaplex right now and hoping for the best.
SncPlsMick 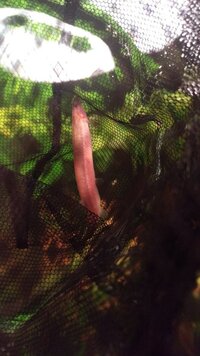 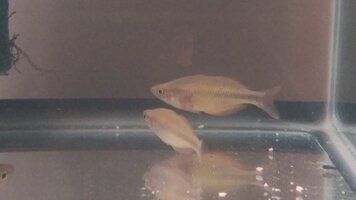 so here's a shot of a khulI loach who seems to have died of the same issue and another angle of the yellow rainbow with the issue beginning to show. The one that had died from it before had it all the way up his body but in the same area.
SncPlsMick 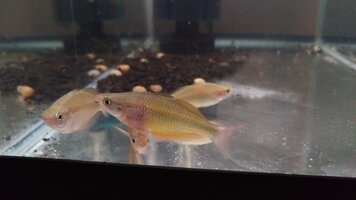 here's a shot from today, the closest one in the shot with the somewhat obvious open sore. Kanaplex does not appear to have done much of anything and it's only gotten slowly worse. I am surprised it's alive at all to be honest though. The scales and flesh near the area are raises and irritated looking, honestly looks as though the sores are an internal thing working their way out and once they break the outer layer it gets dramatically worse. Any ideas guys?
Triston Wasmund
What state are you in? I know that near where I live, Houston Texas , there is a flesh eating bacteria in the water they are trying to get fixed up

Rainbow Fish scraped one of his sides