Flavescent Peacock Cichlid Will Not Eat.

Vern
Greetings,
I got a flavescent peacock a few weeks ago but it never has shown an effort to eat. I have tried;
New Life Spectrum: cichlid formula 1 mm pellets
Nutrafin: Bug Bites betta formula
Nutrafin: Bug Bites for bottom feeders
Nutrafin: Max
Tetra: TetraCichlid floating pellets
Omega One: Super Color Flakes
Omega One: Freeze Dried Tubifex Worms
Omega One: Veggie Rounds
API: Algae Wafers
Xtreme Aquatic Foods: Community Crave flakes
Xtreme Aquatic Foods: Community PeeWee 1.5 mm pellets
I even tried steamed broccolI (part of my supper one night). It only showed interest in the Community Crave once and just spit it back out.
Now it just lays on the bottom in the back left corner, occasionally it'll swim around the tank for less than a minute, then back to its corner.
I suspected it may be a female holding eggs, but I have not seen any eggs and I have seen in its mouth several times since it used to come up to the glass and seemingly stare at me. But now as I look, it's just laying somewhat on its side with a long, average radius, white poo hanging out its backside.
Otherwise it seems healthy, no spots, streaks, red gills or seizures. It just kinda seems depressed.

Tank is 36Gal bow front, but I have a Lake MalawI only tank which is currently under going a fishless cycle.

Insight would be very much appreciated. I got back into the fish keeping hobby a few months ago, and seem to have forgotten everything I learned as a kid.
Demeter
Post a few pictures please. I also suggest you do another large water change. If those test results are accurate then the tank is not cycled. There should be zero ammonia and nitrites at all times in a cycled tank.

Glad to hear you've got another tank cycling for the Africans, they should never be kept with non-Africans as they are far too aggressive for the average community.

As for the not eating and white poo, it might have internal parasites. Prazipro should help get rid of the parasites but if the fish does't start eating then things won't turn out well.
Vern
Ok, understood regarding the cycle, I thought that since ammonia and nitrate had dropped to 0 for a couple weeks (I aI'm to test daily, sometimes twice) the tank had cycled and the increase was due to new fish. I seem to need to research the nitrogen cycle some more.

Regarding the large water change, is 50% adequate or should I go bigger?

Thank you
Vern
And here is a photo, not the most clear, but not bad for a 1 second exposure. 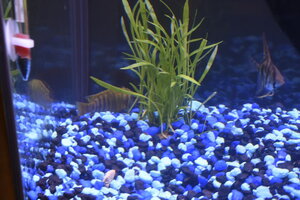 Vern
I tried clarifying the photo a bit in photoshop, here is the result. 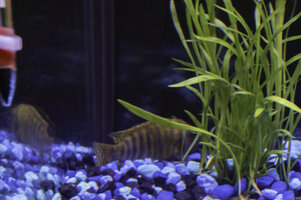 Demeter
The peacock certainly looks stressed. Is its belly sunken in at all? Any of the other fish picking on it?

As for the water change, I’d go with 75% The more the better, those nitrites must come down as much as possible.

Ideally when you are cycling a fishless tank you would be adding as much ammonia to the water as the full stock of fish would produce, this way you won’t experience a minI cycle.

When adding new fish you should only add a couple at a time, depending on that species bioload, so the bacteria colony can adjust in time.
Vern
Ok, thank you, I am doing the water change now.
The 37G is the first time I have attempted a fishless cycle, the currently occupied tank (36G) was cycled with the tetras and has been a long process.

No, none of the others were picking on it as far as I know, the KenyI seemed to check on him from time to time though, never acting aggressively towards him that I saw.
He looked healthy as far as I could tell and was active up til today. Catching him was a huge challenge so there was a definitely a will to live.

I did exchange the fish today, and this one ate when I fed it, so that indicates to me a healthier fish, I couldn't watch the other one suffer any more. Hopefully the store will successfully save it, the sales person indicated that it would be going into a hospital tank, so with any luck he will survive.
Vern
I waited a few hours after the water change and my readings are now;
Ammonia: 0ppm
Nitrite: 0.50ppm
Nitrate: 20ppm
Are these are safe numbers, or should I change more water right away?

TY
Vern
Demeter
Nitrites are still high, they need to be at zero. I’d personally wait till tomorrow to do another large water.
Vern
Ok will do, thank you.
And it now appears the prestillas have Ich. I have come across information saying to increase the heat gradually to around 88f for 3 days then 85f for 11 days, is there merit to this method?
I'd rather not have to remove my filter to medicate.

African Peacock Cichlids Eating Each Other