Hey all, It's been forever since I've been on here. Tons have changed with my tanks.
First all, I now have 6 tanks. A 75, three tens, a 29, and a 2.5
My 29 is empty until I get my fish room set up, within the next month and a half.
My 75 houses 1 Red Eared Slider, and 2 unknown but I'm thinking YBS's, a Gourami, and two Eclipse Catfish.
One 10 houses an Electric Blue Crawfish, a Common Pleco (He will either get a pond or a big tank when it's needed), and four Ghost Shrimp.
Another 10 houses a Betta Falx, 10+/- Ghost Shrimp, 7 Cardinal Tetra, and multiple snails.
The last ten houses 13 adult Guppies (Getting an upgrade with the new room), and 23+/- Guppy fry in a breeding box (They are soooo hard to count).
The 2.5 houses a male Crown-tail Betta. 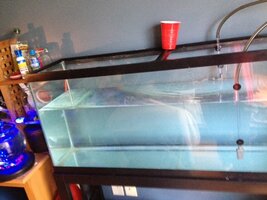 Stage one. I had one turtle. His name is Nemo. He was a rescue from a goldfish bowl. He had an inch of water and no heater, filter, and was with hot pink gravel. I found a 55 gallon tank for 40 dollars from a nice couple an hour away. They gave me two ten gallon tanks and a ton of hamster stuff, too. 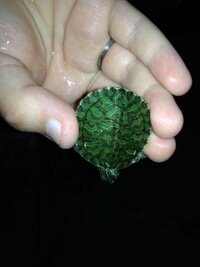 Not too good of a picture, he was the size of a little larger than a quarter. 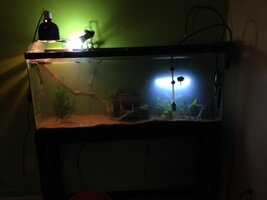 The same day we (best friend and I) went to Petsmart and Petco to decorate and stock the tank. Water Wisteria did super well under barely any light and in sand.

I had a 36 gallon bowfront sitting around upstairs after it housed a baby Chinese Water Dragon for a year. It got cleaned and set up alongside the 55. 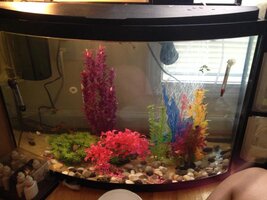 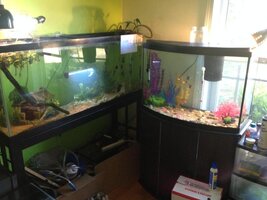 The first picture was when I had it sitting on the floor. I got tired of it. It looked tacky. Went upstairs and dragged its stand down, too. I took the 36 down. It had a terrible algae bloom. I was young, didn't know how to fix it any other way but to give up. Fish from the 36 went into the 55.

My first ever Common Pleco passed away while housed in the 55. He was 5" long. It broke my heart. I loved him to death.

Later on, we rescued 6 turtles from a ten gallon tank forty five minutes away. We lost all the turtles but 2 from what we rescued. The other two now live with Nemo in a 75 gallon tank. They are Pockets and Nims.

Fast forward a while, 55 gallon sprung a leak on the left panel after moving a desk beside it. We lost all fish that were in the 55, I knew it was time to start over. To the dump it went. Christmas came and I got a 350 Gift Card to Petsmart. 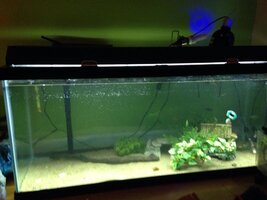 The first night of the 75 being set up. It sat on my floor for a long time. I had a 4 week old kitten who was VERY curious about the turtles and fishes.

This was my only tank for a while, but I knew I wanted more. MTS hit and the "Fish Rack" was born. 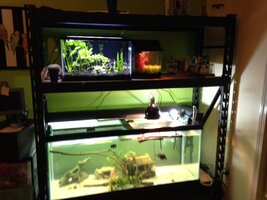 This was taken after my Falx Betta came and Toffee the Crown-tail had to be moved to a 2.5. He was NOT happy about that, lol. 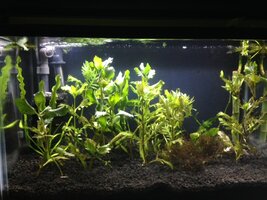 My first ever experience with a planted tank started with this tank right here.
That yucky brown java moss didn't turn over for a good couple of months, but now I have enough to separate it between the two tens.


Everything stayed like this for a while. Three tanks. I always had wanted to put a second ten beside the first ten, but didn't have the money to go through with it. Then, Petco's Dollar Per Gallon sale started, and I started to get money. 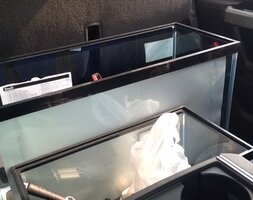 A trip to Petco before my first ever trip to Petland brought home a 10 and 29. I wanted a 40b and a 20b, but mother said no. Eventually. 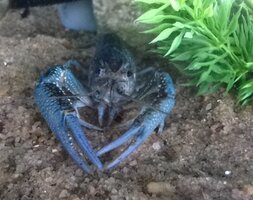 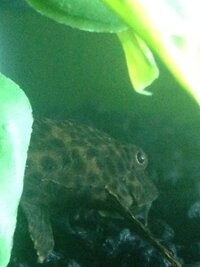 After seeing the Tennessee Aquarium with my mom for the first time, I think it convinced her to let me go deeper into this obsession. We came home with 15 guppies, 20+ Ghost Shrimp, an Electric Blue Crawfish, and a Common Pleco. Petland had the best variety I've ever seen.

The drive home from Petland was a three and a half hour drive. That was not expected, mom wanted the "scenic" route. We lost a few Shrimp, but everyone else made it just fine.

Fast forward a day and we had lost a male Guppy. Suspected it was sick when we bought it. Lost another male not too far down the line. Realized I have too many males. Way too many. Males are getting moved out ASAP and more females are being bought. 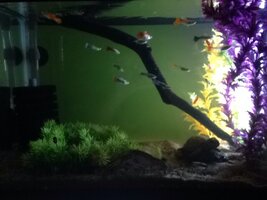 I knew nothing about the Crawfish. Common sense should've said he would eat plants. Next day we headed to Petsmart to get another ten gallon. They now do a dollar per gallon sale, too. And they're much closer to me than Petco. Thank you.

The new ten gallon came home and in went the Crawfish and Common Pleco. They live peacefully together with four Ghost Shrimp and a few snails. They'll get an upgrade, too. 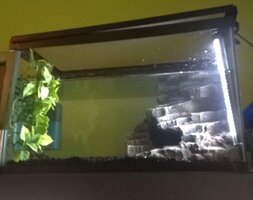 Don't know why the picture is sideways, that's annoying.


Ordered plants from DustinsFishTanks, I didn't think they were coming for a week. They came in two days. Love buying from him. 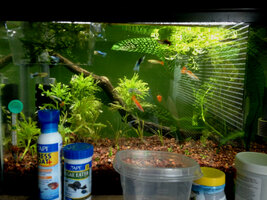 The plants were in. Excuse the mess, babies came and I was flustered. The babies grew and grew. They are a week old on Wednesday.

The first planted tank got a rescape the day the babies were born. 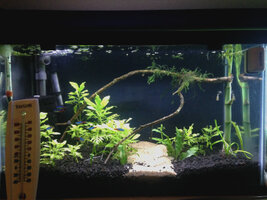 Still not happy with it, will be eventually.

Fast forward to today, at least 15 new babies were born and more are being born as I type this.
The Fish Rack now: 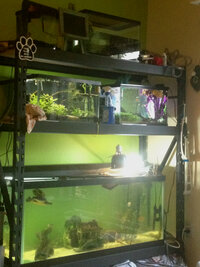 Actually, that was before the new plants came in, lol. But it's the same concept. .

Wow, welcome back haha! Pleasure to meet you!!!

Welcome back! I'll read through this in the morning as I am going to bed soon.

I have that same rack in my fishroom

Is that fish rack from Lowes? That's the one I'm using as a double tank stand lol.

BornThisWayBettas said:
Wow, welcome back haha! Pleasure to meet you!!!
Click to expand...

Anders247 said:
Welcome back! I'll read through this in the morning as I am going to bed soon.
Click to expand...

EricV said:
I have that same rack in my fishroom
Click to expand...

HI and thank you! Also the rack is bending, well the boards are, so within a month it'll be gone and I'll have custome stands.. More on that later!

Hi, the rack is from Amazon.com but it could very well be from Lowes, too! I think Home Depot also had it. Amazon was cheapest for us, though. Haha.

Yea they're made by Edsal I think.

Yours has boards? Mine has welded wire shelves that are rated for 2000lbs per shelf.
OP

Mine is rated I think 1800 per shelf? Or was it 1200? Somewhere around there. It's like particle board? I'm not sure. I don't trust it. I can't wait to move them off of this stand. The 75 sits on the metal railing so I'm not worried about it. But the tens have started to tilt. 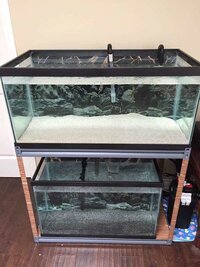 babynemo said:
Mine is rated I think 1800 per shelf? Or was it 1200? Somewhere around there. It's like particle board? I'm not sure. I don't trust it. I can't wait to move them off of this stand. The 75 sits on the metal railing so I'm not worried about it. But the tens have started to tilt.
Click to expand...

I think the smaller models of the edsal racks use the particle board stuff (which is absolutely terrible for any application where it is going to be exposed to water). The one I have is something like 8' long x 3' wide x 6.5' high.

Yea my shelves have the particle board so I try real hard to get it wet or wipe it off right away if it does.
OP

EricV said:
I think the smaller models of the edsal racks use the particle board stuff (which is absolutely terrible for any application where it is going to be exposed to water). The one I have is something like 8' long x 3' wide x 6.5' high.
Click to expand...

Mine is a little smaller than yours. Depth wise. The height and length are close. I'm 5'2" and use a ladder to get to the top ten.


Dom90 said:
Yea my shelves have the particle board so I try real hard to get it wet or wipe it off right away if it does.
Click to expand...

Yup. Scary when it gets wet. I try my best but it does get wet. I have a towel I use just for my fish tanks.

That looks cool. But unsteady to me? I don't know. Even though my shelves are rated so high, I'm terrified they will break.


I might not be making sense atm. Very tired. Have marching band/color guard camp tomorrow and then the two upcoming weeks. Thank god I'm a senior.
More details about the new fish room tomorrow after practice. Pictures and measurements. Advice will be needed for sure.

It might just be the angle I took the pic, its crooked. But I can assure you its straight lol.

Yea I been watching, so far so good though. If it starts to creak, I'll get a wooden board cut at Home Depot and replace the particle board.

Really nice tanks, great to see how they have progressed. Anytime I have wood under a tank, I always waterproof it to prevent water or moisture to creep and weaken the wood. Best of luck.

Rivieraneo said:
Really nice tanks, great to see how they have progressed. Anytime I have wood under a tank, I always waterproof it to prevent water or moisture to creep and weaken the wood. Best of luck.
Click to expand...

How do you waterproof it?

They make paint on clear sealant for decks and also a spray kind I believe. I've used the paint on kind for various things over the years, it works great.

Now if only I knew of this last week before I got hit with the MTS bug lol.