one of my platy has sometimes thick poop. most of ttime white colord. sometimes red when i feed flakes. sometimes he has normal thin poo.
he is very active and eat like a pig.
i didnt feed him yesterday and today morning and after feeding today evening here is some pics of him
is it normal?
or
does he is suffering from internal parasites? if so, how can i cure it?
he is with three more platies and 2 guppies. other fish too has white poop but very thin, not like his poop.
i am worry about him so please help 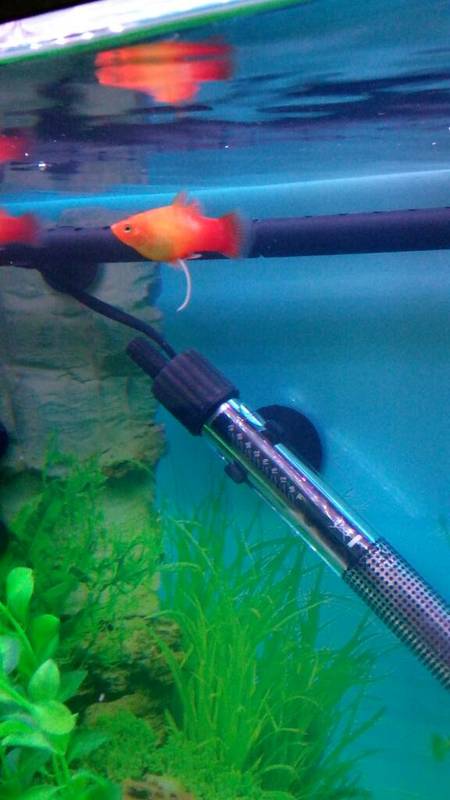 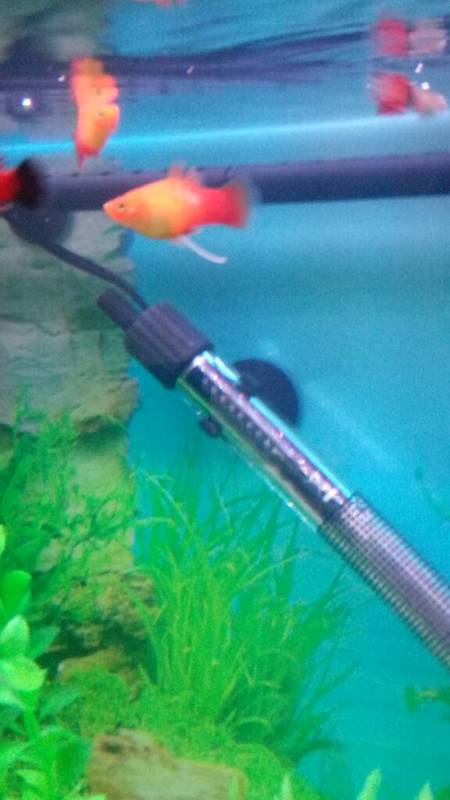 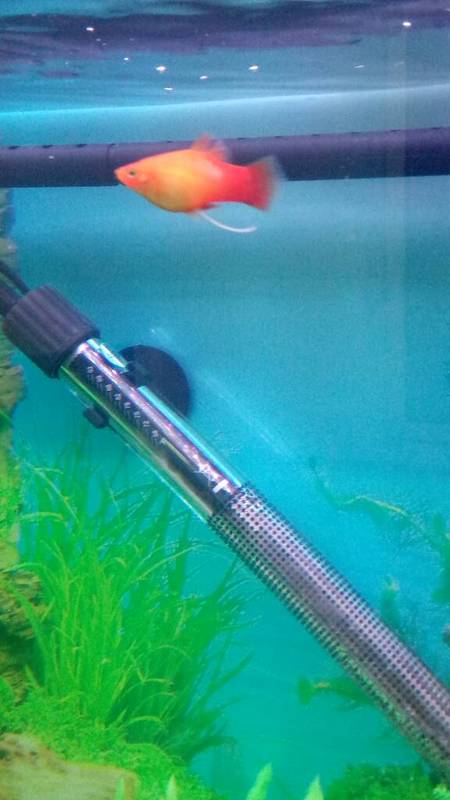 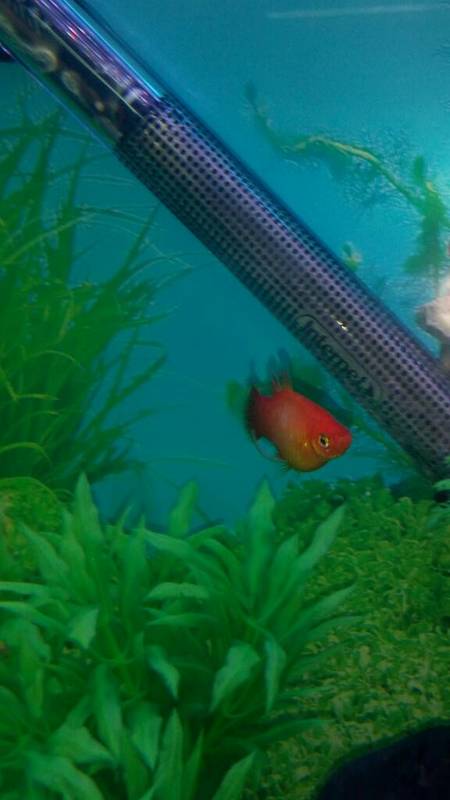 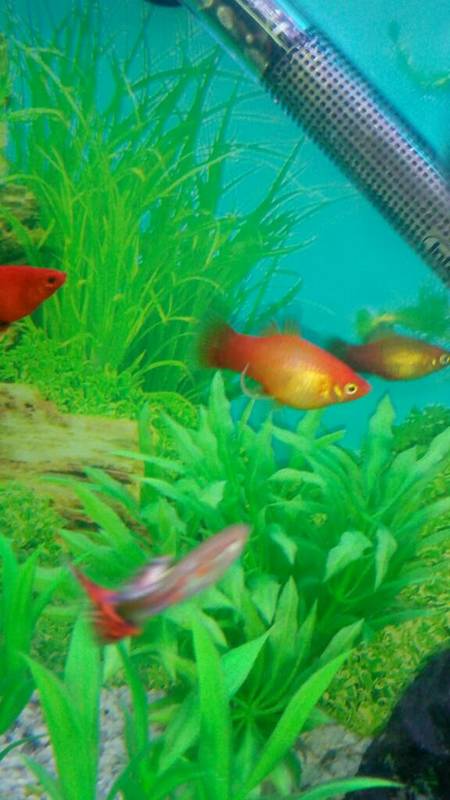 despite the worrying faecal length and consistency for a livebearer, they all seem to have good weight, size and posture.

A lot of problems can develop from treating a condition that doesn't actually exist. Remember that your tank, no matter the size is an ecosystem (efficient or not). Rather than ruin this system, I would recommend a pra-active approach of non-reaction, simply given this common problem.

However, given my own experience, if it is a serious condition, delay to treat is an inevitable death. So, as a Biologist myself, I weighed up the risks and chose to treat with something that doesn't tend to harm the ecosystem too much. Metronidazole is the answer here, should you want to treat (which IMO I would'nt recommend).

hi thanks for help. i wouldn't like to treat if i am not sure about the diseas, as you said. what are the symptoms of parasites in depth? mine fish physically don't look sick. they're active and eating normal. i have them for more than a month now. sometimes i feed them flakes by hand. they often poop transparent or sometimes green if i feed them vegs.

This sounds quite normal, especially with feeding veg.

Fish do not have the ability to break down chlorophyll, and many fish can't break down pectic substances either (found in large quantities in plant material). The presence of transparent poop would then lead me to believe that they are simply passing this material out, as they cannot process it any other way.
As an experiment to see if this is correct, I would personally (up to you), refrain from feeding vegetables for a couple of weeks and feed a high quality, rich pellet food. I would almost be prepared to bet you that you'd likely see a difference here.

With regards to internal parasites, and what symptoms they exhibit in freshwater species, it is impossible to tell. Because there are hundreds of thousands of species from protists to nematodes in the animal side, to fungal and bacterial issues, as well as viral problems. Just the same as when you are ill, you are treated symptomatically rather than diagnostically unless if it is very very serious. So, typically, this is what we do with fish since it is impossible to correctly ID internal parasites (unlike external ones such as Ich) in the home. But as I said, I wouldn't worry too much, sounds just like you are too concerned! We all are about our fish and aquariums.

They have ragged fins and there is a patch on the marigold that looks like a minor injury. I'd keep an eye on tankmates.
The fish are robust, and while that waste colour is odd, see how they respond to different diets. As said above "parasites" are a world of creatures, each unique. If the fish lose weight, the usual treatment would be praziquantel, but it isn't cheap. I'd first go with a higher fiber flake diet - a plant flake, a staple and a colour flake in rotation. See what happens over a couple of weeks.
And figure out where the wounds are coming from. What is your water hardness? Platys need minerals in the water.

thanks izao and Navigator
yes one of platy has ragged fin as he fight with other. they r all male. they were peacful till this week. ok i will not feed them vegs for a few weeks and feed them only color pellet Nd flakes. normally i feed them jbl novo bel flakes, tetra color pro crisps, jbl dried daphnia once or twice a week, sera algae rich flakes (sometimes) and two to three times a week i feed them boild peas, blanched organic cucmber or zuchini and very often banana i will observe them Nd if i see any difference then i will tell you or consult you guys

today i feed them daphnia and flakes presoaked in fresh garlic n aquarium water. they didn't like it as much. but anyway they ate it. after a few minutes the platy had red poop. today morning the other platy was attacking him n he ran into cave and was shaking badly. i also noticed the missing scales on the belly of both platies with white spots. one of them also had red dots (probably blood) on white spot. so i removed the attacker and put him in a 30 liter tank alone. 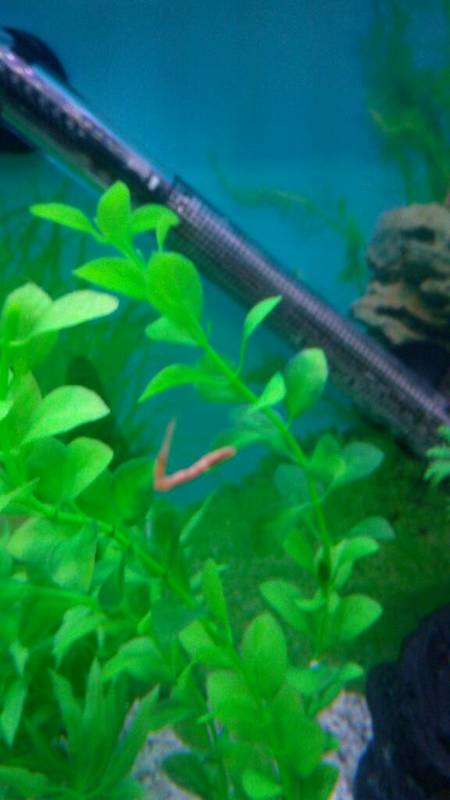 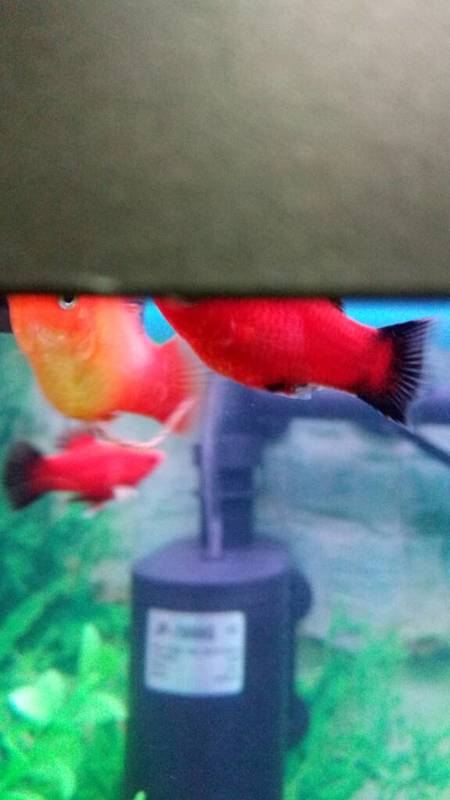 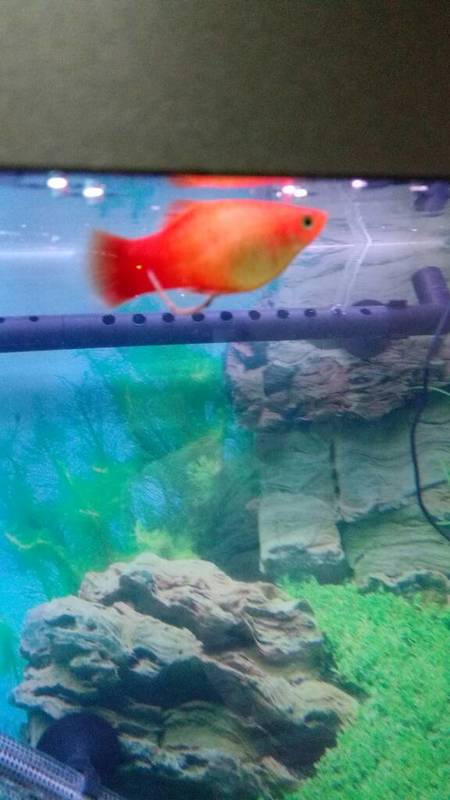 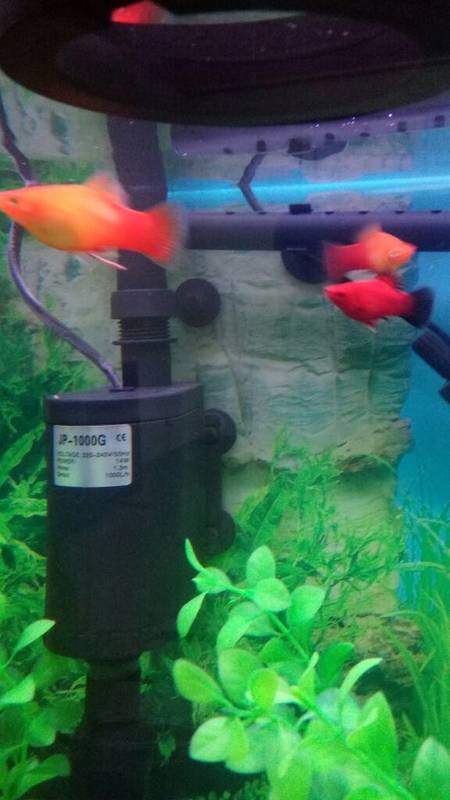 I would never keep a male only livebearer tank. I know it's often advised on this forum, but I consider it poor advice. When I was breeding large numbers of various sword, platy and molly species, I separated the sexes at first, and the males often really harmed each other. In groups with both sexes (a surplus of females) injuries were rare.
The nicks and bites often become infected, and then you can have a bacterial infection cut loose in a group.

i have two female platies but they are yet in quarantine tank. how can i heal the wounds? that platy is not active as he used to be. he is hiding, fearing and not much interested in food. sometimes he shakes his head

I would use sea salt or kosher salt (non iodized salt) for wounds. Salt is an irritant, but it stimulates a defensive slime response in the fish, and that in turn speeds healing. I don't know how hard your water is.
I've always disliked using salt, but it is the right chemical in your case.

When I use it, I'm not very scientific in measuring it. I use "grandmother's recipe" amounts. Does anyone want to offer a suggested dosage?

i have 110 liter tank and water general hardness is 12-14 and kh is 10-12. ph 7.6 temp 25 Celsius.
i have unionized sea salt. would be nice if anyone suggest the salt dosage. does salt effect the bio-filter by killing beneficial bacteria?

Umar said:
i have 110 liter tank and water general hardness is 12-14 and kh is 10-12. ph 7.6 temp 25 Celsius.
i have unionized sea salt. would be nice if anyone suggest the salt dosage. does salt effect the bio-filter by killing beneficial bacteria?
Click to expand...

In what units are your hardness measures? ppm? dH?

In general, I also don't like to use or recommend the use of aquarium salt as it is almost always unnecessary. However given that you have only livebearers who do tend to favour it slightly more, you may use a VERY small amount. I would literally use a couple of pinches, no more. Yes it can upregulate the production of glycol-proteins (slime layer), but if you overdo it there may be no return for irreversible damage you may cause to the internal organs.

The best approach would be to simply try your best to ensure that no fighting occurs, and that your water is in tip-top condition. Healing is a piece of cake for any fish given this kind of environment.

Lastly, I would agree with with regards to the sexes in the tank, and I would not fret about the RO unit for your purposes. Your water supply may have nitrates, but it is not a serious problem provided you keep up with regular WCs.

I have a 40 gallon that contains some small but aggressive Telmatochromis Cichlids. They have been battering each other a bit, but because of their size and bad habits, I don't want to break the group up. Plus, I am hoping they will calm down and eventually breed.
They are a hardwater African river fish, like your platies, even though their habitat is half the planet away from Mexico. I used 6 tablespoons of sea salt (aquarium salt sold as a medication is different from Rift Lake salts, or salts for marine tanks. It is just pure salt at 100 times the price) per 40 gallons, since these are a salt and mineral tolerant species. I would not do that for softwater, rainforest fish. The lesions the fish had given each other (this species has teeth you can see) healed up, and they finally seem to have developed a tolerance for each other. Salt can be a good medication. I am now phasing it out with my weekly 30% water changes. I'll use it again if they wound each other again, but its job is done.

We have a problem in our hobby. A lot of aquarists believe salt is not a chemical. They think because it is found in some natural habitats, it is natural. It is, for coastal species exposed to it. For an Amazon fish, tens of millions of years away from its presence in the environment, it is as weird and shocking as any chemical produced in a laboratory. Indeed, it can be more shocking. Yet because it is "natural", people on this forum will pour it into tanks with softwater fish. Untrained fish store staff will suggest it, because they use it to keep parasites away in their overcrowded, none too clean tanks. It is terribly over-used in the hobby.

But when its use is called for, it is brilliantly effective.