Cycling a 5.5gal Aqueon with 4 white cloud mountain minnows, while dosing approx. 10ml of API Quick Start (QS), which is actually the dosage recommended per 10gallons (hey, it's just bacteria). Set everything up last Saturday night (the 4th).

I did dose slightly more than 10ml for the initial startup. Obviously, I did not test for parameters that night, nor did I feed the fish. Other then that, the fish were fed every day once or twice, unless otherwise noted. Also, I added 10ml of QS everyday AFTER doing a water test, which I think is important, so you don't take any bacteria out that you just added. I will note that I did not do any water changes during the cycling phase in case that isn't obvious, because of the same reason as before.

Interestingly, two of the fish, assuming they are males, are already showing spawning/breeding behavior.

9th: Ammonia -- .5ppm
Nitrite -- 0ppm
Nitrate -- 0ppm (Not sure, but the yellow seems a bit darker than previous testing)

I decided to fast the fish for the first time, because the Ammonia was moving up, and the bacteria thus far hasn't been doing anything, as far as I could tell. I was starting to think this Quick Start stuff doesn't really work. My logic behind not feeding was to slow down the Ammonia buildup, while giving the bacteria a chance to establish itself better.

10th: Ammonia -- .5ppm
Nitrite -- 0ppm (although I do think it looks a little darker than before, but maybe it was me being hopeful).
Nitrate -- 0ppm

Nitrate -- 0ppm (Again, there is a noticeably darker yellow hue that is less translucent).

12th: Ammonia -- dropped down to .25ppm, though it does look between that and .5ppm.
Nitrite -- went up .25ppm
Nitrate -- 0ppm. It looks like it's slowly going up by the darker coloration.

13th: Ammonia -- .25ppm
Nitrite -- 1ppm
Nitrate -- 0ppm to 5ppm (Nitrates showing on day 9 of cycling! It does look closer to 5ppm than 0ppm. I just set it inbetween, since I think it's best to be a little conservative). 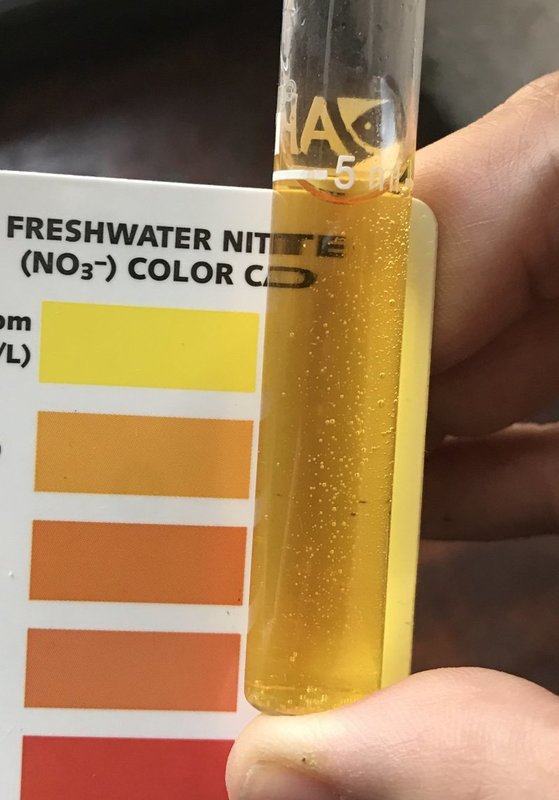 14th: Ammonia -- 0ppm
Nitrite -- 5ppm (possibly higher since in the API test kit for Nitrite, the highest reading is 5).
Nitrate -- 5ppm
High nitrites, so decided to not feed today. Otherwise, the fish appear normal and healthy.


So far, I am pretty satisfied with the results, as it took only a week to see results. Will update further.

Will do. And Good Luck!
OP

Sorry for the late update for those following (literally no one). So as you can see, it took only 10 days to start seeing nitrates. I did a huge water change a day or two later after seeing them, because of the high nitrite and seeing one of the minnows visibly stressed (the other 3 seemingly okay). I then dumped the rest of what was left of the QS into the tank. In truth, I probably should have done it sooner when seeing how high the nitrites were. I would say it definitely has the right kind of bacteria and does help cycle the tank much sooner than without. People who say it doesn't, they are probably confusing it with another API product called Stress Zyme. It doesn't make it instantly safe to add fish, like it claims; however, neither does Tetra Safe Start, a much more popular product for cycling. Do make sure to follow the directions on shaking the bottle very well. I believe that's an important overlooked part. The reason I did a fish-in cycle was because I felt a lot of people with stalled cycles are the result of adding straight ammonia, perhaps even too much of it. My ammonia levels never went to 1ppm with a fish-in cycle with feeding. Checking water parameters obviously is very important, which helped me decide when I was doing too much.
OP

I could have done an instant cycle by adding already established media, but was curious about this product, because of the many mixed reviews on it. I have noticed many of the negative reviews or the ones where they recommend Tetra Safe Start, instead, have never actually used the API product and even read downright wrong information given about it (i.e., wrong kind of bacteria). So seeing this, I naturally was curious to find out for myself whether this product actually worked or not. Now, I don't necessarily mind seeing the same product being touted, but if there are other substitutes that work just as well or even better, then I feel it should be known, especially if that certain brand that's always being mentioned isn't available to some people. I am going to build another tank in the very near future, so may either use API QS again or another bacteria product.

Interesting to read, thanks for doimg this little study
B

I created an account to thank you. I fell victI'm to ignorance and started a tank (15 gallon) with guppies not aware of the nitrogen cycle. Local petsmart told me to just use the QS, but after researching online, I had realized how bad I screwed up. I'm going to follow your method, and hopefully have a positive outcome. I'm already attached to the fish (lol).
OP

BO JANGLEZ said:
I created an account to thank you. I fell victI'm to ignorance and started a tank (15 gallon) with guppies not aware of the nitrogen cycle. Local petsmart told me to just use the QS, but after researching online, I had realized how bad I screwed up. I'm going to follow your method, and hopefully have a positive outcome. I'm already attached to the fish (lol).
Click to expand...

HI and you're welcome

There are some things I would have done differently, like doing water changes when my nitrites got too high and feeding much more sparingly. However, the cycle may have taken longer to complete. Also want to note that I purposefully did not do any water changes, because I wanted to compare results with Tetra Safe Start+, which claims they can cycle within two weeks without doing any water changes. There are a lot of threads about the nitrogen cycle that you can search for to help you gain more information about it. You can also make your own thread to get more specific concerns or more immediate answers. Good luck!

Hello scarface, I am another member that just created a memebership to thank you, thank you so much for these explained steps, I'm a beginner and started a tank 5.5 gallons with 3 female betta ( sorority ) and it's been a month since I am trying to cycle the tank with the fish, water change everyday morning and evening so the fish won't get harmed, but then I read tour post, and today is my second day ( no water change + adding QS ) and will see the progress . Your process makes a lot of sens. Again thank you so much
Share:
Facebook Twitter Reddit Pinterest WhatsApp Email Link