PETS BEST FRIEND
Not the exact pieces I was shooting for but for a good price I said what the heck. Looks like for plants it still needs some java moss and some repens?, My thoughts anyways. Any other thoughts on plants?, Looking for something else for the scheme and possible layout. Thank You 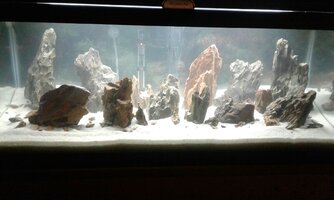 75g Discus Tank
I would suggest laying some stones flat down or some angling up at a 45 degree angle.
Also, if you made 5e rocks flow, that would look awesome!
PETS BEST FRIEND

I would suggest laying some stones flat down or some angling up at a 45 degree angle.
Also, if you made 5e rocks flow, that would look awesome!
Click to expand...

To many in front? Take rear ones and slope them one direction only? I know it doesn't look right I was going to build the sand higher on one end but can't find my supports here anywhere at the house. I know it looks messed up that's why I am asking lol

That brown one in the rear also hurts the lay out being different color I think.
75g Discus Tank
It kind of looks like a grid with the rocks.
Try playing around with the scape over the next couple of days.
Then, you can find the right amount of rocks that you think.

I personally would take out a couple of rocks.
Fashooga
I have to agree with 75 gallon Discus Tank, it looks like a scene out of a sci-fI movie. You probably best to lay them flat and try stacking them over each other.

Sometimes less can be good.
bumblinBee
I like what the others here have suggested, I'd like to suggest creating more of a focal point, the issue is that each of the rocks is attempting to draw our eye, trying to grab our attention but it's all screaming for it and it's too much for the brain to focus on, try creating a piece that stands out above the others, or creating more of a flow with the position of the rocks because they feel like you just have two lineups of rock. A popular aquascape is creating a centrepiece with the stones all jutting away from one another in close conjunction, OR creating a pathway sort of look by building up two sides to generate a middle ground free of rock. You could also try to create more uniformity in a natural way by angling them all in the same direction with varying sizes. Here are some examples of what I mean that I just found quickly while searching. If you're not happy with any of these looks I can't help you very much, I'm not very creative and tend to follow theses sorts of popular and traditional setups I'm afraid hah
PETS BEST FRIEND
I don't have perfect flat pieces and point tops, Does this look any better? Thank You. 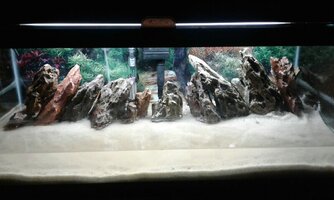 I have to agree with 75 gallon Discus Tank, it looks like a scene out of a sci-fI movie. You probably best to lay them flat and try stacking them over each other.

Not all scary movies are bad to watch on scI - fI but then again they all re runs. One would think that Jason dude would be dead already lol

Removed some stones and used some spider wood instead for a center piece with some of the rocks. Will post a picture later in the day with what I came up with it is 2:26 am. Good Night and Thanks for the tips all.

Well I woke up must be my nerves. Anyways I re did the tank again. I like this setup just needs some plants and some fish in there now. Good Night Again lol 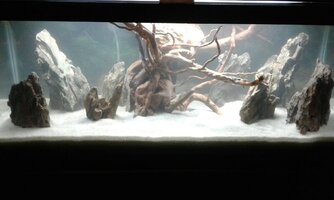 bumblinBee
Both of the new setups look much better than the original! I would only suggest (if you have any) to add some smaller ones here and there for just a little more variety and then the plants like you said and you're golden!
JoeCamaro
I think I have OCD and I tend to like things to be equal, symmetrical, balanced, aligned. Things don't work like that in nature, so I am trying to keep that in mind when working in my aquarium.

The last layout looks so much better than the first. I would just suggest to play with the rocks position a little bit to make it less symmetrical on both sides of the wood, if you don't find an asymmetrical layout you like then just ctr+z and go back to what you the way you had it.

Anyway, this is just my opinion, ultimately it is you who has to decide what you want. There is no greater pleasure than staring at a tank that is exactly what you dreamed of.

Good luck.
aussieJJDude
Dragonstone is easy to work with since it takes very little results for it to look good. Something that I find is helpful is to break up some stones - hammer and chisel will do - and have smaller pieces stattered around the larger ones. Likewise, having all the stones 'facing' one direction really helps add to the scape, whether its all to the left/right, or a focal point somewhere off center.
PETS BEST FRIEND
Racking my brains here. Should I remove the spider wood and just start over again? Second pic front changed a little. 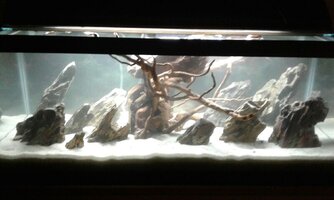 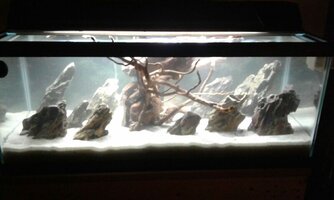 I think with plants it will look a lot better, I just don't know. The snails seem to like it though. 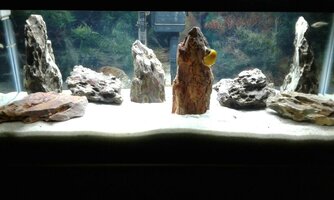 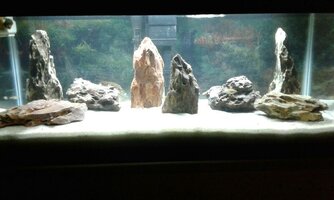 Fashooga
I think it’s too symmetrical. It mirrors each other.

Have you thought about perhaps pushing the rock into the substrate? Also I think rock (from left to right) #3 and #6 could be joined together to make it look like one rock. Take out #4 and see what you can do to make #5 or #7 (back rock) more of an angle. This might require you to use another rock to get it to angle better.

You might want to push some of the sand back to create more depth. So it’s high from the back and comes low towards the front.
aussieJJDude
Really look into breaking up stones, this will help immensely. Likewise, gather idea from YouTube... typing dragonstone in the search bar will lead many results to gather inspiration from
PETS BEST FRIEND
Yeah I broke up some stone to try to make it look like some high peaks on the back and smaller peaks on the front, Left a little valley in between the middle. I think I have it now my thoughts seem to be working with me or at least I hope. Pretty excited about this one myself considering I have no other color sand to blend with it or no more stone to work with. Water is still cloudy in first picture. Second picture water isn't cloudy. Thank You

PETS BEST FRIEND
Changed it again lol. It would appear that I simply have been trying to hard with what I have to work with, So I changed it again for the last time. Less stone and there I have it finally. Thank You 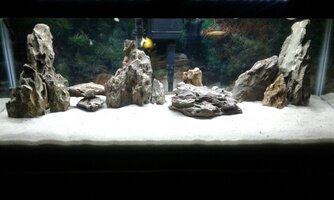 toeknee
Just a few other dragonstone scapes for insparation. I think forming a hill on on side of the tank with more substrate, and adding plants will really tie everything together in your current scape.
JoeCamaro
It looks great now More natural.
Crafty Cichlid
I like the most recent one, but the one in the back right is showing it's plain side (and lord help me if that's the interesting side - that's my "OCD" to deal with, not yours though, haha). Try rotating them so the most holes are visible, because why else would one have dragon stone, if not to create tension, drama, and flow with the holes? I see dragon stone, and I immediately think tectonic thrust zone - huge slabs of boiling molten Earth being jolted to the surface in a violent collision; explosive release of gasses just as the mighty monoliths begin to harden and cool, leaving them pocked and cratered.

What I love about dragon stone, is the ability to create shapes that shouldn't work, but do. I think of places like Arches and Zion where seemingly impossible rock formations stand fast against what our brains think should and shouldn't work. I just discovered that one of mine that I thought should stand upright to make an arrowhead-peak actually creates an amazing overhang when laid down with the peak pointed to the left. I'm also infinitely frustrated with another piece that doesn't seem to go anywhere, and when I finally found its spot, I put it there backwards. I'd turn it around, but I don't want to deal with getting covered in duckweed to do it.

I did really like the spiderwood centerpiece, but I really hope it only had a rock on it to keep it from floating away. I have tigerclaw in my main, and all my stones more or less point towards it. I recently moved everything around to remove an aggressive fish, so I had a fun challenge re-hardscaping in a planted (but not developed) tank. I wound up with one stone pointing to the middle front, rather than the center of the tank.

Thoughts - My First Atempt At Hardscaping