LONG STORY SHORT, I’ve had my betta fish since August 2017 and not doing my research I ignored the cycle, but once I learned about it in the following month I assumed the tank should nearly be cycled by then. In December I noticed fin rot so I got an API test kit and found my tank never cycled at all. I kept water conditions good and treated with aquarium salt for a week, and it healed up my fish very nice. His color was restored and so were his fins. I then tried to use TSS+. That was unsuccessful so I just tried a normal cycle again. That was unsuccessful also so in March, my tank STILL not cycled I got a new filter because I thought it may be the filter preventing the cycle. After I got a new filter a few weeks later nitrites started showing up... but so did fin rot. I treated using aquarium salt again, but when I use aquarium salt I do daily water changes. Example: I take away 2 gallons and when I add it back I also add the required amount of aquarium salt for those 2 gallons. Well the aquarium salt didn’t work so great this time and also I’m assuming the constant water changes for a week disrupted the cycle and there is no more nitrites, just ammonia. The cycle started over. There is still no nitrites and this was about 3 weeks ago. I’ve been using prime every day and have kept the ammonia under 1ppm so the water quality is good for now until it cycles. I’ve used aquarium salt and I have good water quality but the fin rot keeps progressing. How can I heal the fin rot??

20% water change once a week

Dosage of prime for 5 gal once a day

How do you clean the filter media? Also, if the salt isn't helping it would be better to remove it all together as it can be a strong irritant to Bettas. What dosage of salt are you using? The water changes shouldn't mess up the cycle, as the vast majority of the bacteria is stored in the filter. I'd say it's safe to do some larger water changes to get the ammonia down. What are the dimensions of the tank? What kind of plants do you have?

I rinse through old tank water. I only keep the salt in the tank for a week because I know it is an irritant. I use what’s recommended on the box. I don’t have anything to measure the tank as of right now.There is no live plants.

Dang, I'm sorry you're going through this, it seems like you're doing a lot of stuff correctly. Can you post pictures of your Betta? And what kind of testing kit do you use? 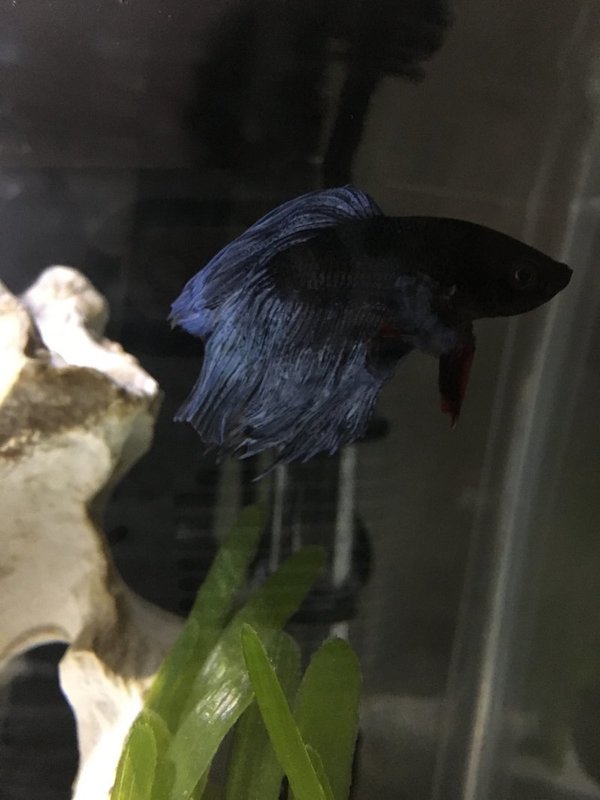 Are you certain it's finrot? Black/white edges? Sorry, it's just hard for me to tell from the picture. Do you have any fake plants, and if so, are they silk or plastic? Sorry I'm asking so many questions

The edges are black. I have two fake plants and they are plastic but not sharp at all

This may sound harsh but this is a perfect example of trying to fix something that wasn't broken in the first place.

You started seeing changes and panicked. You got on line and read that a tank MUST be cycled. You decided to medicate and throw bottled bacteria in there. Every thing you did just made it worse.

If you have tested your source (tap?) water and if it has no ammonia then the very best medication you can give this beautiful little guy is clean water even if that means changing some of his water every single day. Get and keep that ammonia down to zero. I think a lot of reported fin rot is nothing more than ammonia burn.

I know Prime helps keep ammonia safer for fish but no ammonia is better than masking what is in there. Stop stressing over finishing the cycle. The tank will cycle if you will let it. It has no choice. As long as your little guy is producing ammonia and you have filter media in there for the bacteria to grow on the cycle will happen.