I’ve been lurking around these forums as a guest for quite some time, but thought I’d finally create an account as I need some advice on fin rot and buffering pH.

I bought myself a gorgeous crowntail betta about a month ago from a major pet store chain (Pet barn here in Aus) and unbeknownst to me, he had fin rot.
I had my suspicions, but due to the dark colouration of his fins didn’t act until I was 100% sure which by that time . . . his caudal fins had started to deteriorate (I’d now owned him for a week-ish).

I researched, and research some more. Salt seemed to be the best method. I put him in a hospital “tank” (3lt jar) and started him off on pure rock salt, one tsp per gallon for 11 days with 100% water changes. He seemed to get better but he began fin biting and by the third day I had to place him back into the main tank (he was not a happy vegemite!)
I cleaned out the big tank, 100% water change, and had him in there with the treatment for the remainder (8 days) nothing changed but the rot did slow down some . . . well aside from jumping to his Dorsal fin.

I gave him a week rest with 25% water changes every two days in between. My Indian almond leaves arrived about this time and I put in a large leaf broken up into pieces.
During this in-between time with less water changes he did seem to be getting better?? Some of his “rays” were developing new tissue, but the rot was still persistent and his fins had started kinking at the tips. It was odd, some areas were healing, others were worsening.

About 6 days ago, I started with the proper aquarium salt and kept up the 25% water changes. Still he got worse! His “belly” fins are displaying red tips and one is very short and kinked like some of his dorsal and caudal fins. I upped the dose to two tsp of salt per gallon (as per some forum recommendations I'd seen), believe me, I was scared of overdosing which is why I didn't do this sooner despite it being a moderate rot. This has been ongoing for a two days and a half. There has been a change to his fins . . . not too sure if it’s better or worse but the worse affected parts on his caudal fin have become more “raggedy” as if the dead tissue is falling off, but I could be very wrong.

Throughout I’ve been feeding him twice a day with pellets left to sit in fresh garlic and the occasional blood worm. He’s still energetic and lively! Eats off my finger and isn't shy.

Due to the nature of the rot I think it may be bacterial over a fungal one from the spreading and uneven damage? And it’s due to stress over dirty water (his tank is clean, I also gravel vac). Which leads me to say . . . his pH fluctuates big time, I’m talking about steadily changing from 8.0 – 7.0 and all numbers in-between. I’ve recently got it to settle at 7.2 – 7.0 over the last several days but desperately need advice on buffering and why it’s been going all over the place. I can’t even imagine what sort of stress my poor boy has been going through!
I did some research on KH and GK but don’t have the test kit to find out what it is. My tap water changes between 6.6 – 7.0 pH. From the pH I guess it's soft water with low KH though.


His current Tank parameters are:
Uncycled (I had no idea about cycling before I purchased him! But now know better – any advice on cycling the tank with him in it would be most appreciated. Currently I’ve been doing frequent water changes and watching the ammonia/nitrites closely).
Filter: been modified to a slow flow as not to damage his fins.
Tank size: 20 lt (5 gallon)
Water temp: Fluctuates between 27 – 29 degrees Celsius (I can't get it below 27 due to my climate - even if I have the aircon running 24/7).
Ammonia: 0
Nitrites: 0
Nitrates: 0
pH: 7.0 (at the moment)
GK: Unknown
KH: Unknown
Other: Has plants but not a planted tank (only gravel, no substrate) a large piece of driftwood, and IAL (one and a half big leaves). Water is tannin tainted.

Please, any direction would be very very appreciated!!
Should I take the next step and treat with antibiotics? And if so what is best, Tri- Sulfa or aquari-cycline (these are the only two I can get my hands on). If not, what should I do?
And how can I buffer my pH? I read bi-carb soda could be my best bet, but is there anything else I can do?


I’ve included pictures of him below (I do apologise, they’re not the best!)
(If they don't show, here is the stash they're uploaded to: ) 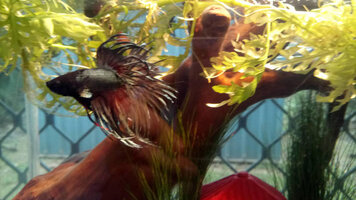 Thank you for reading this big, beastly wall of text!

This link will have info on fish in cycling and good recommendations for beneficial bacteria brands in more detail than I could provide to you.
As for the pH are you testing your tap after it has sat for >24 hours? Settled/aged water can test differently than straight out of the tap. As long as your pH is not going through drastic swings or on a constant trend (can indicate issues with decor or debris) don't mess with it. pH buffers of the chemical sort often work too well and cause swings that are much more stressful than a slightly unperfect pH. That being said bettas are very forgiving when it comes to pH and can handle a very wide range. Stable is much more important than the "right" number and chasing the right number often causes more issues than leaving it alone ever could.

Thank you for the link and info. I have been testing it right out of my tap, but I'll definitely give it a go with aged water - do I assume correctly in this will more of a real reading of the pH?

Unfortunately the water goes through drastic swings and it doesn't seem to be in anyway consistent aside from raising up, how much it raises after water changes is what ever the water decides, it seems. I had thought it may be the decor or something else due to the spikes but for the life of me I don't know what it is, everything in his tank is normal, run of the mill items that have been washed (and then rinsed) in bi-carb soda or plain hot water. In the past two-ish weeks he has had almond leaves and driftwood added which seems to have kept it from rising over 7.6 at any given time.
I also agree to avoid using chemicals as I've only ever read bad things, but at this stage I honestly don't mind what pH his water is at, as long as it's constant which is my issue.

Do you happen to know of any natural ways to buffer the water?

Yes, the aged tap readings would give you accurate tap pH.
What decor do you have in the tank? Rocks, substrate? And when you added the driftwood and almond leaves did you add it all at once? That could have caused a pH swing.
I have never used oyster shells but I have read they can be a good natural buffer. As for proof of that info I have none and am skeptical myself but it could be worth looking into. As it supposably buffered up to a point then would stop.

Is Polishing Filter Media Worth It?