I have been dealing with fin rot in my 29 gallon for months now. Everything seemed better, the fish were improving, fins regrowing etc. A few weeks ago, the fin rot returned.... It has now infected more fish than the original ones. I've been changing 30% of the water everyday for the past week (for the week previous I did every other day changes, 2 weeks previous had few water changes as we were having some plumbing issues with the house that made them very difficult) and it hasn't really improved. Everytime I think the fins are growing back, a few days later the fin rot strikes again. I am at my wits end. Please help!

When the fin rot originally started, I treated with a full dose of antibiotic. I am trying to avoid treating with antibiotic again (I don't want to lose my cycle; no matter what the package may say :/). I am wary of using melafix as I have 4 panda cories in the tank.

Nitrates are less than 20 ppm (I was using the strips so its a bit hard to tell. The nitrate level is the same as that of my source water, probably around 10-15 ppm).
No nitrite.
No ammonia (I have not tested it lately, but I have tested several times in the past and have never had an issue after the tank was cycled).
Water is "soft" according to the test strips. I have tested with a kit and there are essentially no minerals. 0 KH, 0 Gh
I did try adding my shrimp tank minerals to the tank to see if higher GH would help. The finrot seems worse since, so I have stopped.

The tank was previously being fertilized with Aquarium Coop Easy Green and Root tabs. I have stopped using them as I don't want to spike the nitrates accidentally and add to the problem.

I have removed most of my decorative vases in case they were leaching some chemical. If anything, the fin rot has gotten worse.

The filter diverter has some sharp edges I noticed recently. I will be covering them ASAP. I have all live plants and no rocks that appear sharp.

The tank temperature is between 76F and 78F most days. It's summer in Georgia so the heater is almost never needed.

I know that more cories and serpae tetras is ideal, but I upgraded these fish from my 10 gallon. I don't want to purchase more until these issues are resolved. I have not noticed any major bullying or fin nipping. They could be fighting at night, but when I witness fights, they usually chase each other for a minute and then stop. No contact made. There are several densely planted areas that give hiding places and break up the territorial behaviors.

The odd thing is that the 10 gallon was my childhood tank, before I knew about waterchanges. These fish should be in heaven with the current conditions being WAY better than in the 10 gallon. That is one of the reasons I am so frustrated, as I have had these issues with a much better setup. They were moved this spring (3-4 months ago), so any stress from the move should be over with.

Please help! I don't know what else to do, as the problem appears to get better, then worse again. None of the fin rot is super close to the base of the fins, but it has worsened over the past day. This has been super frustrating and I really want to be able to go back to weekly or biweekly water changes.

For more info, here is the previous thread from when I began the fin rot saga: HELP Fin Rot | Freshwater Fish Disease and Fish Health Forum | 496921

Have you tried using something like stresscoat/guard when doing the water changes? Sometimes that can help with the fins.

I think you are kind of looking in the right direction. The 0 dKH, 0 dGH can be really problematic when it comes to fins.

many moons ago I was struggling mightily with “fin rot” in fry (very close to 0*/0*)….magic bullet for me, was using magnesium and calcium to the tune of 4-5 dGH. “Fin rot” stopped happening pretty quickly

Have you tried using something like stresscoat/guard when doing the water changes? Sometimes that can help with the fins.
Click to expand...

Thank you. I was thinking of this last night but I could only remember Prime not stresscoat. (I don't use prime since I have well water, no chlorine.)

Thank you. I was thinking of this last night but I could only remember Prime not stresscoat. (I don't use prime since I have well water, no chlorine.)
Click to expand...

A conditioner would still be a good idea nornally as well as most de-chlorinators also treat metals in the water as well.

I think you are kind of looking in the right direction. The 0 dKH, 0 dGH can be really problematic when it comes to fins.

many moons ago I was struggling mightily with “fin rot” in fry (very close to 0*/0*)….magic bullet for me, was using magnesium and calcium to the tune of 4-5 dGH. “Fin rot” stopped happening pretty quickly
Click to expand...

How do you keep the hardness stable? I had more fin rot issues when I tried adding shrimp minerals GH+/KH+. I'm assuming the level fluctuated a bit which bothered the fish.

How do you keep the hardness stable? I had more fin rot issues when I tried adding shrimp minerals GH+/KH+. I'm assuming the level fluctuated a bit which bothered the fish.
Click to expand...

I’ve never really worried about keeping it “stable”. I’ll move the hardness from 20 to 80 to 200 and back to 100 over the course of a couple months.

for week to week water changes, I’ll mix my change water slightly softer than my target to account for evaporation

What is your Ph in the tank. I would imagine it is very low with 0 KH and 0 Gh. You need Gh especially in order to keep Ph stable. A low Ph is basically acidic and is probably a big culprit. I understand that adding the minerals seemed to make the issue worse, but it is possible this is temporary because the fish are just stressed due to the changing parameters.

I cannot remember the exact pH at the moment. I believe the strips show 6.8 but my liquid test kit shows way closer to 6. I purchased some stress coat today! I have a little crushed seashell (crushed coral) in the filter, but I’ll probably add more as it isn’t keeping up with the water changes. I may add a little of the shrimp minerals as well.
Thank you all! I feel way better with a game plan that should finally end this frustration!!

Still having some issues. I have raised the GH of the tank and began adding stress coat. Fins on the tetras are looking better, but the fins on the Cory's continue to worsen. The speed that the fins are rotting away seems to be decreased though. One cory appears better while another appears worse. They are pretty hard to see though as they like to hang out in the corner under a plant.

What else should I do to help? I have decreased my waterchanges to two per week (ish) as they were dropping the GH. I am going to waterchange today. Note that the nitrates still aren't higher than the source water as the live plants are doing their job.

Thanks for any advice! I'm glad that at least some of my fish are doing better, even though the improvement is so slow. 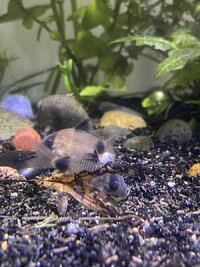 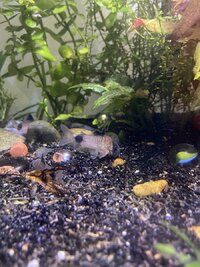 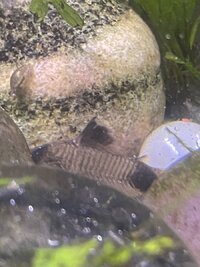 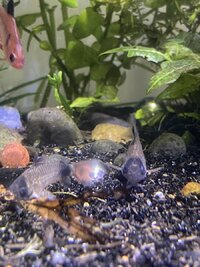 Update: Tetras have turned for the better. Corys are worsening.

I feel like I have two options. Buy an antibiotic or move the cities to my shrimp tank which was their old home before all the fin issues started.

it’s getting pretty close to the body now so I’m a little worried. Thoughts?
You must log in or register to reply here.