I found a really adorable female Betta for sale and had to have her, she's absolutely adorable. Her tank is set up in the traditional way you would for a male Betta. I have a rain filter that has a semi-strong flow to create enough oxygen in my tank while not causing a lot/any surface movement or water movement in the rest of the tank.

I've never owned a female Betta before and I did a lot of research online but most, if not all of it, is aimed towards the male Betta's. She's a very active Plakat Female (usually the complete opposite of my preference in Betta fish. XD) and spends a lot of her time swimming around in the filter flow.

I was wondering if the same rules for the filter flow still applies for the females. Obviously I know they wouldn't like a tank with a flow like a rapid river, but do the females have a lot more tolerance for water movement than the males?

Also: Am I correct in thinking she is a Piebald, Crowntail Plakat?
Partially an excuse to show off her beauty. :3 I called her Luna because her right eyes is a beautiful blue/grey. (It's hard to get pictures of her, she's SO active. XD) 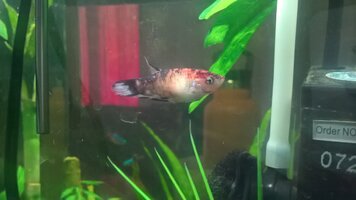 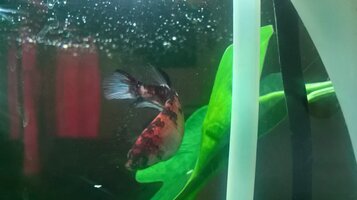 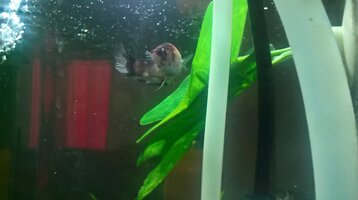 I think environmentally they are quite similar to males. As far as flow goes, i would just see how she does with it and if she looks stressed or not. I just go with spongefilters myself because i used to really like the BIG finned/tail bettas but see no reason to spend money to replace.

Imo plakats in general have a higher tolerance for current because they have an easier time swimming than bettas with longer fins. As long as the current isn't like a rapid river like you mentioned she should be fine.

I'm not sure what her exact coloring is, but I know she's not a piebald. Piebalds are one solid color and 1/3 of their body near their head is whiteish. I only know this because my male is a piebald . I also don't think she's a crowntail, she looks more like a veiltail imo. Here's a link to the female betta tail identification thread if you want to take a look: How to tell the Tailtype of your Female betta | Betta Fish Forum | 168549
Upvote 0
You must log in or register to reply here.

Aug 4, 2019
AleksTheFish
My Young Female Betta Insists On Resting On Heater. Is This Normal?