I have a 6 month dark blue plakat female (Madam Bleu) and almost 1 year blue rose tail male (Hayabusa)
I was conditioning them for breeding, and Madam Bleu got very noticeable breeding lines which actually showed up immediately the first day they were introduced. Hayabusa instantly began his bubble nest. It seemed like " hooray they like eachother already"
2nd day the bubble nest accidentally got destroyed when the almond leaf had moved and partially sank. So I floated a plastic lid on the water to stay afloat. He immediately began a new bubble nest under the lid.
Each time they saw eachother they would flare and wiggle their tails and hayabusa would dance and fly over to his nest. Madam's stripes were very prominent.
Once Hayabusa seemed done with his nest (I am guessing, as he seemed to stop building and would just sit under it, splayed open and waiting...) I finally released her into the open.
BUT she swam to the bubble nest (which was sadly only half the size of his original one he had made under the leaf) and within 30 seconds, she turned real white and got horizontal fear lines.
Then she swam away from the nest and Hayabusa darted hard at her. I immediately scooped her out and put her back into her tank.
Within 10 minutes she waa dark blue again.

Can anybody tell me why this happened? Did she hate the bubble nest that bad? Lol. Would you try again?
This pic is what I took of her breed lines, obvi. I didnt get a photo of her fear lines dangit, but she was WHITE with 2 dark lines from head to tail 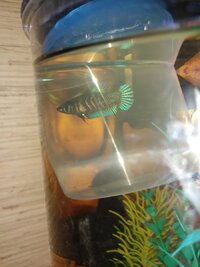 Sounds like she hated the nest but usually they destroy it not turn into their stress stripes. Every fish is different so who knows.
I'd try again later. Let him build a bigger nest first.
Upvote 0

I would try to re introduce them.
my female does this to when i first put her in with him but they go away after a few minutes and she is my best breeder female all fish react differently to breeding and as long is she isn't keeping the stress stripes for longer then 15 minutes it should be okay.

plus the males are super aggressive so when breeding be prepared to have both the male and females fins damaged. 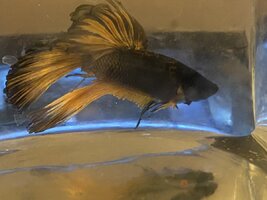 good luck though baby bettas are SO cute!
Upvote 0
You must log in or register to reply here.

Jan 16, 2020
PascalKrypt
Male is really shy and is getting bullied by the female

Apr 19, 2022
Paulforfish
Tips on how to condition female betta for breeding?