Female Guppy being courted even when pregnant?

Below is an image of my female guppy. She's obviously pregnant, but my two male fish, a guppy and an Endler are now constantly after her. I have 2 males to one female, because I was wrongly sold a platy as a female guppy (I thought it was a koi guppy or a female endler with colour as marked on the store label).

I have had guppies almost a decade ago, but had them in a large basin with floating plants, so I did not observe the males chasing as much as I do now. Is it normal for them to try to mate with a female even when she is already pregnant? I know that they store sperm, etc. but don't these fish release some sort of hormones telling the males that they are ready to mate or is this a constant with guppies?

Also by looking at this picture is it possible for any of you to guess how far into the pregnancy she is? I got them for 2 weeks now and she was in an all-female aquarium when I bought her. So I'm assuming she was not already pregnant at the time. I did not know much about the gravid spot check back then, but she was not bulged up at all, that's for sure. 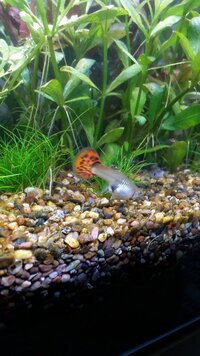 In my experience the Males always chase, even when the female is pregnant. And it looks to me as if she will be ready any day now!
Upvote 0

When it comes to fish (esp guppy); do not think in human terms. Learn to think in fishy terms.
Upvote 0

That's why the question , I was thinking in animal behaviour terms and not human terms. Human males in general would not care. They don't smell hormones, etc.

In my experience the Males always chase, even when the female is pregnant. And it looks to me as if she will be ready any day now!
Click to expand...

Yeah, I find that she is grown a lot too and I'm surprised because I have her just for 2 weeks. As it is her first batch of fry I expect just a few which further makes me think she seems due soon. Not squaring off or anything yet though. The picture does make it seem that way Thanks for the answer about the males always chasing. Good to know.
Upvote 0

Another way of thinking about it. A female guppy is always pregnant , unless there is no males in the area for a few months.
Upvote 0