So I got a pair of A. Cacatuoides about a week ago. I’ve been reading about the female being a contrasting yellow when she’s ready to breed. Can anyone tell me if this is what she should look like? 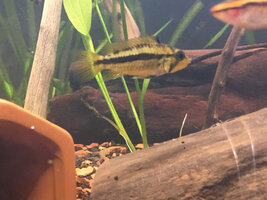 Also if you could tell me the strain of Cacatuoides I have that’d be great. Here’s the male for that. 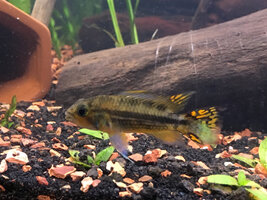 Coradee
Giving this a bump up for you
ktorg
That's the color of a healthy, sexually mature female. Mine get even more yellow and darker black when they actually have fry though. It definitely looks big enough to spawn. I've had them spawn at just over 1" long. You will know when she lays eggs because she will spend almost all of her time guarding them and become very territorial and aggressive towards the other fish in the tank.

The aquarium strains of cacatuoides don't always breed true and really just depend on the colors of the individual fish. I had a triple red pair that would give triple red, double red, and orange flash fry. Your male looks like "double red" because it only has the color pattern in two of the unpaired fins. It doesn't seem to have much color though. "Triple red" would have color in three unpaired fins. "Orange flash" is just a solid orange fin color. Those are the most common color forms. Hope that helps!
yukondog
My BorelliI female was like that at egg time, after the fry were brought she was brighter yellow, good luck on your eggs.
NewbieFishGuy
Thanks for all the replies! Very helpful! This is my first time keeping apistos and man they are very interactive fish! I'm actually about to set up a south american biotope for them and some cardinals because I'm liking them so much.
yukondog
I had cardinals in with my Hongsloi, they looked really nice, in a heavy planted tank with BDBS there colors really stand out.
NewbieFishGuy
So I went ahead and redid the tank making it as south american as I could! Think they're having a great time exploring.

yukondog
Looks good I like the look, I'm about to do the same thing. I got a piece of driftwood yesterday from the creek that looks a lot like yours, I was going to rebuild the Hongsloi tank but found the male dead. Still going to do south a. tank. Good luck.

Jul 18, 2017
Awaken_Riceball_
Not very happy with my apistos