Since sometime last week, my female cockatoo has been hanging back behind my faux, hollowed out tree stump. I contorted my head and neck behind my tank and I saw her hanging out behind the stump. She still comes out to eat, but after getting her fill, she goes right back behind the stump. I wiggled behind the tank again tonight and shone a light. This caused her to swim underneath the stump and then sit there with her head facing out. It appears there is a hollowed out area under the stump in the sand. I don't know if she created it, or if the space was always there. It's a small space. After watching longer, I saw she is actually able to swim all the way under the stump to the other side (which is actually the side facing the front of the tank). I know that cockatoos will lay there eggs on the ceilings of caves or cave-like structures. As I said, the stump is hollow, with 3 entry points. And I have a hollow iron pipe decor with 4 entry points. I've had her and the male for almost a year and never witnessed any kind of mating or brooding behavior. I always expected the female to use the pipes or the stump if they ever got around to mating. But alas, they just weren't feeling it.

But maybe they finally warmed up to each other? She looks healthy. She eats when I feed the tank. But the rest of the time, she hangs out behind the stump just outside of the this hollowed out hole in the sand under the stump. When I stuck my head back behind the tank, she swam to the glass to check me out. She's not being shy. Once I shone the light on her, she swam to the hole, turned around, and faced outward. It looks like she's guarding it. It's impossible for me to tell if there're any eggs on the underside of the stump. I'm just not that flexible to get a better look.

So I'm just wondering if this sounds like it's brooding behavior or something else.

This is a 36g bowfront with a male pearl gourami, 12 lambchop rasboras, 11 cherry barbs, her hubby, and some amanos. All the fish have been in the tank since June of last year, before I even got the cockatoos (September of last year). The shrimp went in almost 2 months ago. This behavior started last week, and when I tested the water Sunday before my weekly water change, the parameters were 0 ammonia, 0 nitrites, and 20 nitrates. Temperature is about 78-79. All other fish are acting normally.

Here is a picture of her hanging out in front of the entrance to her hole. A few minutes before this, she was further back inside the space with just her head sticking out. My body was starting to hurt being twisted and bent behind my tank so this is the best I could get. 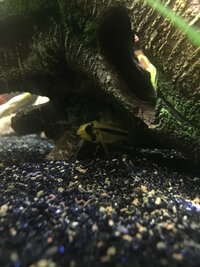 Bumping this up for you

Well, I was able to answer my own question. My female cockatoo is NOT guarding eggs.

I saw something that at first I thought was a small piece of debris floating in the water just above the substrate. But after staring at it long enough, I realized it was a baby! It was probably the size of a sesame seed. I have no idea how many there are yet. I'm kind of wigging out, I don't know what to do! Ha!

with all the rasboras & barbs in that tank, they will likely not make it once they come out. If you want to keep the fry, your best bet is to slowly raise the tree up then slide a bowl underneath while lifting the tree out of the water. the mama and most of the fry will probably stay in the bowl. Move them to another tank for raising.

If you leave them be, you may have a couple that will make it

Yeah none of them made it. I was just letting nature take its course. I knew it'd be a crapshoot; nature can be brutal.

for sure, nature is harsh!

I like to use the half coconut shells. These are really easy to lift up if needed.

Aquascaping Tips and Tricks for a Beginner