Travis Bradbury
My sister just got another femmale betta, and the old
One seems to be chasing the new one like crazy.

I told her its normal and it will stop eventually.. as long as there isn't any damage to the fish.

What do you guys think?

Repolie
You're only supposed to attempt a betta sorority in a minimum of a 20 gallon tank with at least 5 females to even out the aggression. On very rare occasions they get along, but that's next to nothing. One will always be dominant and eventually harass the other one to death. How big is the tank?
Travis Bradbury
Its a 10 gallon.

I do know that you need 5 bettas to even out aggresion yes.. and that 1 will always be queen..

I'm just wondering if its the normal behaviour with fish.. when a new fish is introduced, they get chased.. etc.
Ive had peaceful, semi-aggresive and aggresive fish all do this and it was fine.

Should I tell her to get afew more as soon as possible?
Thunder_o_b
I am another one that would council you not to put five bettas in a ten gallon.
CanadianFishFan
Even people who have kepted them for 10 years fail in a 30 gallon. I suggest a 20long thickly planted. It is normal but if with only two one will get killed. The female has already claimed the whole tank as her territory and will fight to protect it and even kill. Tell her to buy a divider and divide it like I do with mine. 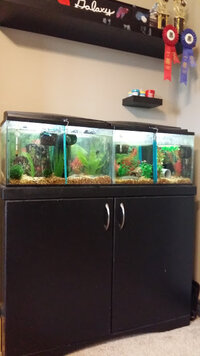 DuaneV
It is 100% normal, and she's going to kill her. Get them apart ASAP or one WILL end up dead. Sororities that work are few and far between, and anyone who said you could put 5 in a 10 gallon doesn't know what theyre talking about. When you DO attempt a sorority it needs to be done all at once in large tanks that are heavily planted and ONLY babies used. And even then they don't work out. Ive had bettas for 27 years, attempted a sorority a on a few occasions and its NEVER worked out. And I'm talking 30-40 gallon tanks that were so heavily planted you couldnt see through them.
HairyCatFish
No it is not normal to continuously chase.
The aggressor will wear out the weaker betta and then kill the poor girl.
By the time you notice injuries on the weaker fish it will be too late, she will either be sick from stress or dead.
The tank in that video has absolutely no safe place for one betta to escape or hide from the other betta.
That setup is completely inappropriate. You've basically set up a death cage, death match situation for these 2 fish.
I don't know where you or you're sister got information that says this is okay but you really need to do more research.
Repolie
Huh?! 5 in a 10 gallon??? Where is this coming from? There isn't enough room for a female to escape or hide when they're getting bullied. Also the smaller it is, the more fights there are. The bigger the tank is, the greater the success and most people that have attempted sororities that worked out say that a 20 gallon (long) is best. The betta your sister first had in there has already established her territory and when another one is in her territory, she sees it as an intruder and will try to kill her. When starting sororities, they're supposed to be introduced into a space at the same time so no one already has an established territory. She should return her or divide the tank.
CanadianFishFan
Lets not overwhelm him by repeating things please.
HairyCatFish
Here's one end result of one betta chasing another in a 10 gallon. 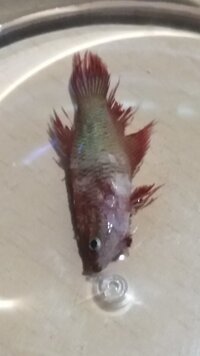 And here's another one without physical injury evident. This poor dead girl was harrassed so badly she died from stress related injuries. 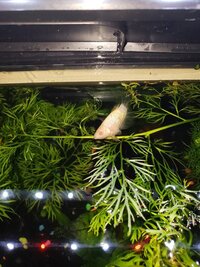 There's one other gruesome death I just couldn't photograph. All of this happened in a planted 10 gallon tank. 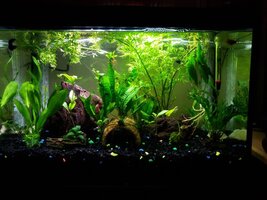 Travis Bradbury
Okay thanks everyone!

Shes either going to give me one of the bettas to put in my 75 gallon community, or return it to LFS.

What fish can go with a female betta?

I already know this answer but I have her reading this thread.. so she can see what can go well.
CanadianFishFan
Maybe some small schooling fish ( Cant remember the name ) Shrimp or snails. Bettas in a community tank should really have a 20 gallon so they can have space.
Travis Bradbury
Do you think both bettas would be okay in my 75gallon?.. right now its all peaceful fish in it. Danios, platy, rummynose tetras.. etc.

Wondering if they will still kill eachother with all that space
CanadianFishFan
That one is hard for me to question. It could work if they get enough space each but they may harass the other fish. Bettas don't like small fast color tetras and such.
DuaneV
Its not necessarily about space, its more about sight lines and open tank area. Even in the most heavily planted tanks they can still kill each other. Its just not a good idea in general to keep them together.
AJE
Wow! I think I could smell that

Here's one end result of one betta chasing another in a 10 gallon.
View attachment 481715

And here's another one without physical injury evident. This poor dead girl was harrassed so badly she died from stress related injuries.
View attachment 481716

There's one other gruesome death I just couldn't photograph. All of this happened in a planted 10 gallon tank.

david1978
I couldnt make 3 bettas work in my 75 gallon tank. With 5 it calmed some but once I was at 7 it really calmed down. Now with other fish in your tank it may distract them enough to keep them from fighting but nothing is guaranteed.
TeamRandrus

Do you think both bettas would be okay in my 75gallon?.. right now its all peaceful fish in it. Danios, platy, rummynose tetras.. etc.

Wondering if they will still kill each other with all that space
Click to expand...

I had two in a 38 gallon... arguably not as big I get that but I will give you my experience: my betta chased my poor second female betta literally to death- did not let her rest, anytime this other betta slept my alive betta would come and stalk her. Then attack. I made the choice to wait a day to separate them, and that's all it took. In the span of a few hours my one betta had eaten the other, it was morbid and depressing... I honestly would not even try it unless you do what David did and up to seven to distract them. BUT if one dies, you have to go through the pecking order again and oh man its tedious. Your almost better off separating them- an excuse for more tanks

** I really wanted a female sorority- I tried and tried- eventually after research I decided it just wasn't worth it! Just my experience though.
Thunder_o_b

Do you think both bettas would be okay in my 75gallon?.. right now its all peaceful fish in it. Danios, platy, rummynose tetras.. etc.

Wondering if they will still kill eachother with all that space
Click to expand...

I have one female betta in our 150. There is every thing from mollies, glass cats, glow lights, rummy nose etc. not a bit of trouble.

My Betta Are Fighting