I just gotta talk about my little ferret! I have a year old male/female (not sure think it’s male) names Oscar. The only issue is he doesn’t have a friend, u should have them in pairs and Mom won’t let me get another (he came solo). But this little monster is extremely attached to me. I didn’t think he was until my mom was cleaning his cage and he opens the chinchilla ball he was in temporary and goes searching for me. Srsly this thing is so cute. The only issues? He stinks, extremely stubborn and spoiled, messy, and freaks out a few of my friends (but most love him, act like he’s a golden doodle puppy) I have these chew sticks and he loves them! We also recently got a new harness for him, we had to get the ones for guinea pigs since he was obviously the runt of his litter, only about a foot long and maybe maybe nine inches around. Yeah he’s pretty small. He loves his walks tho, get a lot of people asking like “is that a ferret? That’s so cool” actually me and my cuz we’re walkig him and a car pulls up and this teenage boy turns down the window and asks “wait isn’t that a ferret? That’s awesome!” Anyone else got some fabulous ferrets?

I don't have a ferret anymore but I did have 1. It was an absolute nightmare. I would play with him as much as I could before and after work to tire him out but then at night he would be up causing a ruckus. I later learned that yu are supposed to have them in 2 or more. I cleaned his massive cage out a few times a week. But he never relieved himself anywhere in my room which I would let him out whenever I was home. love animals and have had taken care of a variety of them but the ferret is a whole different beast. They are cute, mischievous, playful and smart. But have soooo much energy! I actually crocheted a sweater for hi. But eventually gave it to a friend who really wanted one. Oscar sounds great and if he's attached to yu... May be a great companion. Good luck and enjoy having Oscar!
OP

Yep. His only flaws is again the smells , his claws becuz I’m to scared to cut them, and the fact that he is SUCH an escapee artist, he has gotten out his door multiple times, got out of the hamster bal, and has ripped a hole in the bars so he could fit. Don’t worry we covered it with plastic. He is a monster when it’s time for a bath. Arms get all scratched up but they don’t hurt anymore and he never cuts skin so it’s fine. I just love when they duke or do the ferret war dance
OP

Plus he’s a flat out brat half the time lol

I think we should judge if he's a brat for ourselves. Photos? Video?
OP

I’ll try. He squirms a lot when I take him out and my camera is a potato but I’ll try oh actually I think I have a few pics of him a couple months ago, he’s getting a little furrier tho, we have a cat food for him called Purity and it’s really god for him plus he loves it ok I grabbed pretty much all the pics I had of him that’s aren't as blurry. They didn’t let me post anymore pics I’ll post more later if u want

Haha u haven’t seen the way he throws litter and food everywhere and he also poops in more than one corner of his cage, usually not in the litter box lol

They're cute and maniacal... kind of like having a 3 year old. Same happens here... even the poop. Ha! BettaFishyLuvr ... yur ferret is a cutie pie... brat or not... the cuteness overcomes all!
OP

yep, especially when they do the ferret war dance, mine was just recently wrestling a bag before I left for school and put him back in the cage

You have a cute lil' ferret! I've got one named Grace.
She's so amazing... She literally bursts with personality! She does have her faults, though--but who doesn't? I'd say her absolute worst one is constantly peeing on the floor. She bugs the other animals a lot, too (by chasing them around 'cause she wants to play with them or clean them), and she likes to go potty on the floor in hard-to-reach places, too! =(
Anyways, here she is: 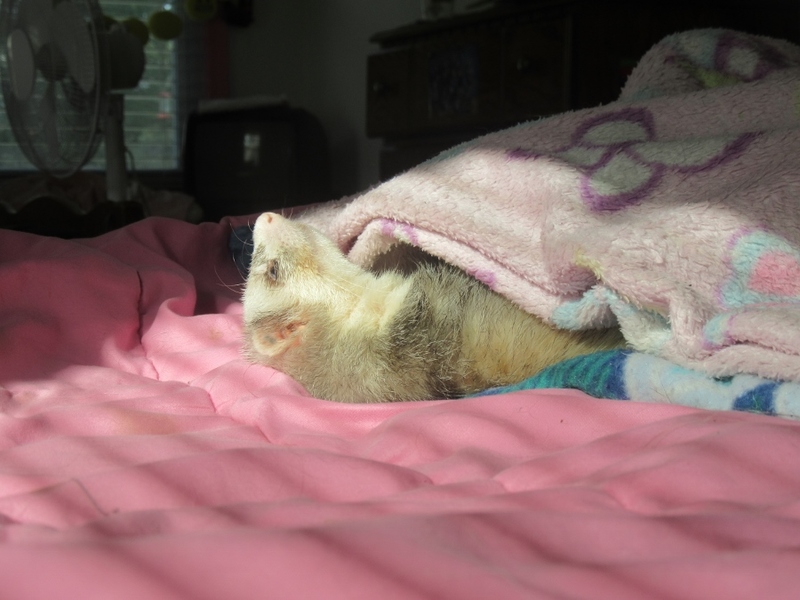 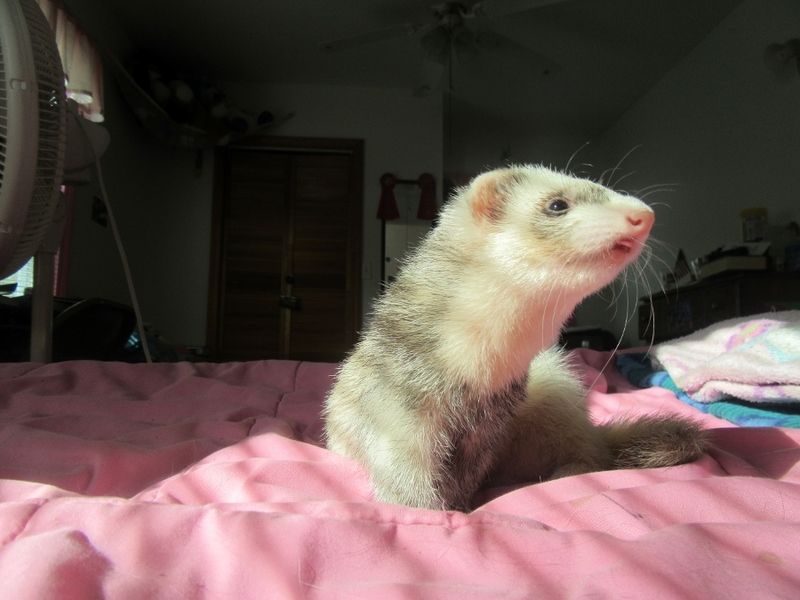