I’ve had my betta fish Ghost for about a year now in a 5 gallon heated/filtered tank, with weekly water changes. A few months ago, I got a second betta fish that I keep in a similar tank nearby.

Over the past week, Ghost has developed an extremely bloated abdomen. He has also stopped swimming around, usually resting on his leaf or the tank floor. At first I thought it could be dropsy/constipation/some type of swim bladder issue. I started changing 1/3 of the water daily. I stopped feeding him for a few days and then fed him blanched peas. Throughout this time, though, he was defecating normally. The fasting period/peas didn’t seem to make a difference with the bloating.

Now I’m wondering if “he” could actually be a “she”, who became egg bound because the other tank with the new male betta is in her line of sight. The bloating is very light/almost transparent looking; normally, Ghost is a dark black/silver fish. I checked, and Ghost does have a white protrusion under his(her?) abdomen that looks like an ovipositor. At the same time, Ghost has made tons of bubble nests in the past, which I thought was a male-only behavior.

I’m really confused now about what the problem is & how to fix it. I feel awful that Ghost is suffering and I want to do whatever I can for him (or her).

I’ve included pictures to show the extent of bloating and what I believe be the egg spot/ovipositor.

Any help or advice would be really appreciated! Thank you! 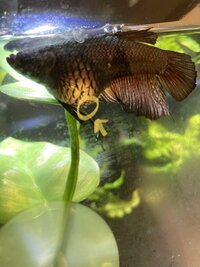 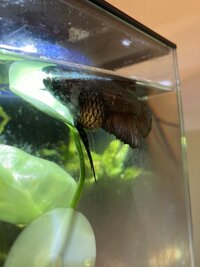 (There’s a bit of algal growth on the tank walls because I haven’t wanted to disturb Ghost to scrub them down).

Hello! I do believe ghost is definitely a female, as females sometimes will blow bubble nests.

Usually eggy females won’t behave any differently, so since she’s exhibiting symptoms of sickness I suspect it might be something else, although since the amount of eggs a female betta produces varies from fish to fish I would first try to maybe put paper on the sides of the tank so she can’t see the male and see if that helps.

peas don’t always work for bettas, and it’s in debate whether or not they can actually hurt them. I personally don’t think they can do much harm but you’ll have better luck trying to feed daphnia (live or freeze dried) if you can get your hands on some.

I hope this helps!
Upvote 0

I'd suggest fasting every other day.

I just fasted my veil tail female Tangerine 3 days last week because she was huge. She's in a community tank, so I put her in a 1 gallon for an hour until the comminuty tank was clear of food ( the tank has cory cats & snails which can be slow eaters) and Tangerine is a piggy.
Upvote 0

Aug 19, 2021
NicksFishTanks
I dont know what’s wrong with my betta