Hi, I have several blood parrots or as I was told they were. I am wondering if any of them could possibly be a King Kong parrot since it is much more red and can correctly close its mouth. Please identify, thanks! 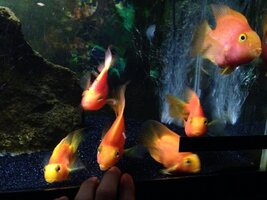 Hi, I have several blood parrots or as I was told they were. I am wondering if any of them could possibly be a King Kong parrot since it is much more red and can correctly close its mouth. Please identify, thanks! View attachment 175118
Click to expand...

I have the same thing. Bright red and the mouth is not as deformed as a Blood Parrot normally is. I was told by a breeder that not all fish come out the same. Some have the trait and some do not..(open mouth). In other words...all fish are not born identical. I believe he said. Severum and red devil. Now...the body of my parrot is kind of funky. He looks lumpy around the middle. Like he's bloated! In fact..it worried me for quite a while until a better fish store said that it was a normal characteristic. I know one thing..he gets along well with all the tank mates and eats like a pig!

Look at my link to my 90 g planted tank in my signature Go to 1:24 on the timeline and there he/she is!

I know right! They eat anything I put in there sometimes I'm afraid I over fed them!!! But which fish, the BRP or the KKP is a higher breed? Thanks.

Some info on parrots.

I have already done extensive research and saw that website already, but thanks for he referral. I am looking for anyone with firsthand experience of these type of fish and some nice pictures of theirs! Thanks!

Uh oh!! We have low quality Parrots!! The mouth closes! I also heard that the Severum as a possible contributor was a myth. The African Cichlid breeding specialist that I deal with states that there have been a lot of experimentation with cross breeding different species in the Parrot line. He acts like you never know what you're gonna get! He states that he's getting frustrated because the hobby is getting convoluted with cross breeding and hybrids. He has a few Peacocks that he doesn't even know what they are! All due to cross breeding!

Geez...so many opinions! I think I'll just sit back and enjoy my deformed fish!

Heck..I have tons of pictures of my kids!! Let me share with you! 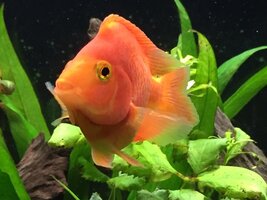 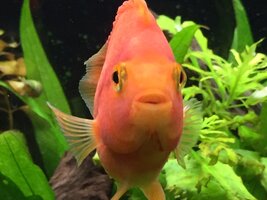 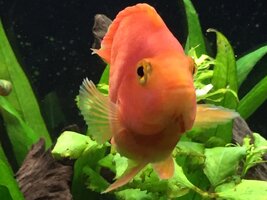 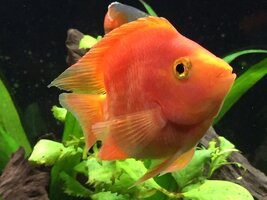 I've had 15 of these over the years, even though they may come from the same batch of fry, they are not all the same size and they may not be the same color. My largest to date is 10" x 8" and 15 years old.

Thread moved to Hybrid Fish/Parrot Cichlid section of the forum.

HI Ken, you're tank looks amazing! Chrt, yours extremely cool, are they King Kong parrots? Because they don't seem to close their mouths. Ken, do you remember how much you've paid for a King Kong parrot? Also, how fast does it take for blood parrots to grow another inch when they are around 2"-3 already? I feed them heavily everyday with a varied diet of bloodworms, blood parrot pellets, NLS and tetra color granules, while doing 25%water changes every week

The reason I've became so interested in King Kong parrots recently is because I brought my parents to a pretty far LFS for the first time and when they saw the fish, they said it was the one they've always kept before! So I wanted to get one for them! However, if too pricy, the store owner said we could do Angels? The 3"-4" Angels are diamond, mixed and black and are selling for $30 each. Is this a good deal? Should I just get one to start off with?
Last edited by a moderator: Aug 10, 2015

Thanks for the compliment! Check out the information in the link above.

The most I've paid for any Bloody Parrot is $25 from PetCo. Many of my fish came from WalMart @ $8 each. The one's from WalMart have lived just as long as the ones I've purchased from PetCo.

These fish are fairly slow growers.

Feed sparingly. As long as everyone gets a bite or 2 maybe 3 everything should be fine. Over feeding can lead to poor water quality issues. If someone misses out, they will probably be first in line for breakfast the next morning.

None of the Bloody Parrot websites will mention this, but several years ago a genetic research grad student at the University of Michigan did DNA testing on these fish. The only species indicated by the results was Amphilophus labiatus. This should be taken with a grain of salt, as the sample only uses a very small portion of the genetic structure; however, I have never seen any solid evidence that these fish are a hybrid, as all the characteristics are congruent with labiatus/citrinellus that have probably been deformed. Considering the number of species that have been deformed by selective breeding since the introduction of Bloody Parrots, this may have simply been the first. However, it would have been financially preferable to keep this a secret by feeding out false information to prevent others from trying to breed them. It is still possible that they are a hybrid, but that would be unlikely to cause the consistent spinal deformity found in these fish.

The sterility of the males is most likely a functional sterility. That is, the "plumbing" is squished or disconnected due to the deformities. Using a needle to draw sperm from the males, artificial fertilization of the eggs should be possible. The trick would be knowing where to stick the needle, as these fish have most of their organs out of position.

The first time I saw young BP that had not yet changed color, I was immediately struck how they were identical to young Red Devils color and pattern wise. At that time I knew one local hobbyist who claimed to have a pair that produced viable spawns, but I was never able to confirm his claim. Subsequent claims have turned out to be "Jellybean Parrots", which are essentially deformed pink Convicts. This is determined by the fact that the fry are born white. Red Devils are born with stripes, and lose them at a few months of age.

Personally, I consider these fish to be Red Devil culls, but to each his own.

Wow! You learn something new everyday, I'll take that with a grain of salt lol. I plan on going to the Pacific Aquarium and Plants in New York City for their King Kong Parrots since I have seen rave reviews of them online! What size should I start out with? Small, medium or big? This will be the final purchase and centerpiece of my tank along with a bristle nose pleco if they have it! Any one have first hand experience at this store? Thanks!

Also, regarding the angel question, $30 for 3-4" angel is quite high, and you can definitely find cheaper angels around. Expect $5-$10 for small angels, and $10-$20 for medium angels. Unless you're planning on serious breeding, you can get pretty, healthy angels for much cheaper.

Thanks, but I don't think I'll do angels anymore, I'll be more focused on a blood parrot and King Kong parrot tank! Thanks again though.

If you're interested in Parrots, you might also look into Kirin Parrots. Same shape and form for the most part, but different coloration and patterning. I believe they are a cross between a Parrot and a Flowerhorn, so they might have a slightly more fiesty temper, and also may get a tad larger if I'm not mistaken.

Yes I've heard of them and seen my LFS sell them. They really are beautiful creatures and I've always planned on buying them later after I saw them, however; they're always gone before I come back lol!

Does anyone specifically know what the Mammon King Kong parrot is?
Last edited by a moderator: Aug 10, 2015

A
Blood Parrot tilted/sideways in salt bath for Ick Treatment

Show off your fish tank!