Eel and Catfish as tankmates?

Hi! I've owned an American eel for about 3-ish years. She's really healthy and about a foot long now. Surprisingly, she behaves really well with tankmates. I've cycled bettas, guppies, and other small fish though her tank without an issue (as long as I feed her regularly). Currently she's with a little guppy and a mosquito fish, because they were getting picked on in the community tank. Now, my brother has a tank with a catfish in it. I don't really know what species it is. The tank is much too small for it (it's two inches in a two gallon betta tank), and he rarely feeds it. It also lives with another rather aggressive fish. I feel really bad for it, because my bro doesn't realize the effort fishkeeping takes, so I'm considering taking it for myself. I want to put it in with my eel (after removing the smaller fish of course), because they have similar environment. But I'm not sure if they are suitable tankmates. I know my eel won't bother it, but I don't know how a catfish would act. Would it attack her? It seems timid, but once it's in a better place, I don't know if it would go after. Any advice?

I think a picture of the catfish or the breed would help a lot. It would be helpful because you can find ultimate size, aggression level, and compatibility.

Here are the best pics I could get. It's a local species, maybe a madtom? 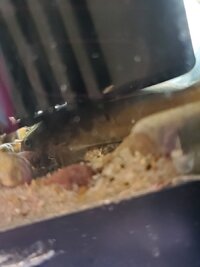 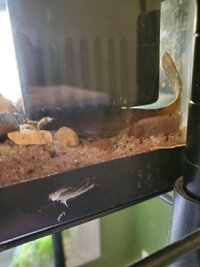