Member
I’m worried about my dwarf gourami. Back on December 18th it got stuck inside an ornament. It took me approximately 45 minutes to locate him and by that time he had injured himself on the top of his head and the bottom. The ornament was thrown in the trash. I kept a close eye on him and he healed completely. However yesterday when feeding my fish I noticed he is now losing scales in the same places he had previously been injured. The area on the top of his head also has white all over. I don’t know if it’s just coincidence or if it’s related to the old injury. I put him in a hospital tank yesterday and put melafix in the tank but then placed him back in the main tank after reading somewhere that melafix can kill dwarf gourami. Does anyone know what is going on? My water parameters were great. I apologize, I’m working right now so I don’t have the exact numbers right this second. But there was no ammonia, no nitrites, and the nitrates were barely visible. I can get the exact numbers when I get off work if needed.
It is eating normal and moving around the tank normally. Maybe hiding a bit more than normal but still comes out whenever it sees me coming to the tank.
The pictures below show the original injury followed by a picture of him healed and then three from this morning showing his current status. 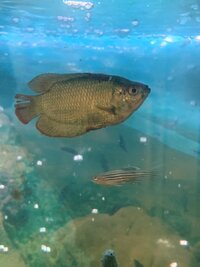 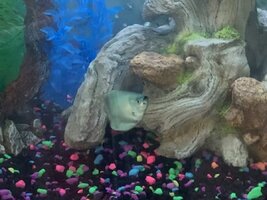 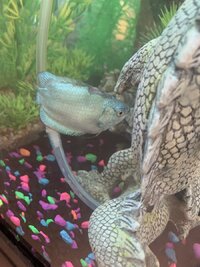 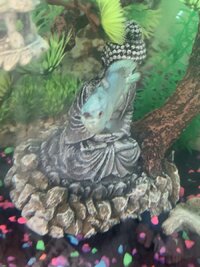 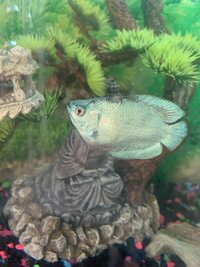 Member
He looks to have some sort of bacterial infection. Maybe columnaris.
A201 is good at identifying illness

Member
I agree, it looks like a bacterial infection. Not sure if it is actually Columnaris. IMO, would use Melafix over currently available aquarium specific antibiotics. I've read that Melafix might adversely affect certain species, but not sure if that's actually true. Be a good idea just to follow the Melafix dosing directions.

Member
Thank you! I will move it back to the hospital tank and move forward with melafix treatment again.

A201 said:
I agree, it looks like a bacterial infection. Not sure if it is actually Columnaris. IMO, would use Melafix over currently available aquarium specific antibiotics. I've read that Melafix might adversely affect certain species, but not sure if that's actually true. Be a good idea just to follow the Melafix dosing directions.
Click to expand...

Apparently it can damage the labyrinth organ that Gourami use to breath air. There is a product called Bettafix, which from what I think I remember reading is about a 1/10 the dose of Melafix.
Not sure how true any of that is but it worries me enough to be cautious.

Member
That’s what I had read about melafix as well, but I’ve only had my aquarium for 6 months and this is the first time something like this has come up so I knew I needed to ask some people that had more experience than me lol.
I just ordered some bettafix from Amazon. I moved the gourami to the hospital tank but I’m going to do a partial water change to remove some of the melafix I put in last night and will keep a close eye on it.

Member
For what it's worth there seems to be little scientific evidence that it really does anything, good or bad.

Member
Thank you all for your help with my fishie!
So, I’ve been doing daily water changes of 30%. I haven’t added anymore melafix, and I only put bettafix in once, at half the dosage. It’s still eating and pooping. These are from this morning. The fleshy part appears to be clearing up on his top, just a tiny spec is left. The areas where the scales had been missing is getting smaller but the area is black. Is this normal for healing? 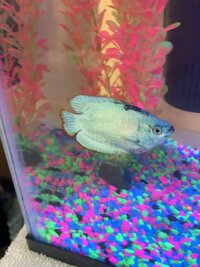 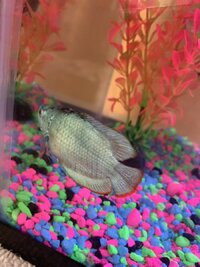 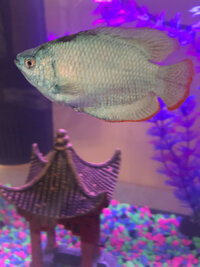 Member
For what it's worth, one of my otos had been injured by the looks of it. I did daily water changes and added aquarium salts (although I was told to avoid salts as otos preferred almond leaves) but the salts worked anyway and they healed up and is still alive 2 or 3 weeks later (I also was told they would probably die soon after).

If I were in your situation I'd keep up the water changes to clean the cut but also add salt for whatever reasons ( cleaning? Calms fish, which can help immune systems?! I haven't got a clue the actual scientific properties of it but I'll have to look it up).

If no one objects and you've exhausted all avenues then it might be worth a go. As I said, I've been told I shouldn't be using the salt in that way so I don't want to push others to do but but it did help helped my injured fish and other stressed fish (including my dwarf blue gourami).
You must log in or register to reply here.
Share:
Facebook Twitter Reddit Pinterest WhatsApp Email Link