Help Does My Fighter Have Velvet? (sorry, Long.)

What is the water volume of the tank?
70L/18.5 gallons
How long has the tank been running?
About one month.
Does it have a filter?
Yes, it has the aquaone ecostyle 1100L/hr
Does it have a heater?
Yes.
What is the water temperature?
Around 26°C/79F.
What is the entire stocking of this tank? (Please list all fish and inverts.)
6 cardinals, 9 neon tetras, 1 Bolivian ram, 6 kuhlI loach, 3 Ramshorn snails, 4 trumpet snails (hitchhikers) and 1 male Betta.

*Parameters - Very Important
Did you cycle your tank before adding fish?
Yes.
What do you use to test the water?
API master kit.
What are your parameters? We need to know the exact numbers, not just “fine” or “safe”.

Illness & Symptoms
How long have you had this fish?
3 weeks.
How long ago did you first notice these symptoms?
1-2 days.
In a few words, can you explain the symptoms?
Clamped fins, missing scales (can't see him rubbing against things), gold dust under gills. Starting to get shredded fins but I think that's from my Bolivian ram (moving tanks tomorrow.)
Have you started any treatment for the illness?
No, but I'm waiting on some almond leaves and aquarium salt. I have recently used melafix for what I thought was finrot.
Was your fish physically ill or injured upon purchase?
Possible finrot (?)
How has its behavior and appearance changed, if at all?
Behaviour hasn't changed at all, appearance described in symptoms.

I bought this adorable betta from a petshop (I'm from NZ and from what I've seen, the fish are in much better conditions than in American pet shops, eg. each Betta stays in a 8(?)L tank with its own heater and filter.) When I first got him he had no fin shredding, but he did have some black edging on his fins which I was suspicious was finrot. His behaviour was perfectly normal and he was quite energetic and had a good appetite.

I tried treating him for the finrot(?) with some melafix, which I regret as it seems to have kicked off a bit of a health fiasco.

I used to have another bolivian ram, but it turned out I had two males instead of the male female pair I thought I had (see other threads of mine) so there was lots of fighting going on between them, though they always ignored my Betta. I was able to give the dominant male away to a friend of mine who is also in the hobby (even more so than me). Even from then on, I had no problems with my smaller ram and my betta.

At one point I had a crisis with my aquarium stand as it's made of MDF and got water swollen and I had to drain the tank and move it before my stand collapsed. This was extremely difficult to do as only my sister and I were home, and neither of us could lift a lot of weight. I had to drain the water into all the buckets we owed (3 with sizes ranging from 5 to 15L) and a couple of baking bowls from my kitchen. In the time it took us to lift to very heavy tank to its new location, the water temp had dropped to about 20°C. The next day, I think my Betta got temp shock and almost passed. (He was *very* pale and was breathing on his side very heavily and slowly). However, he made it and within a day was back to his normal colour and playful demeanor.

A couple of days ago, I started noticing my single Bolivian starting to chase my betta, and over time he even starting nipping him. His tail started to shred and his fins started to clamp, so I prepared to move my Betta to live permanently in my quarantine tank (10L/2.7G).

Tonight I noticed that my Betta is starting to loose scales (even though I haven't seen him scratching on any decor) and his tail is even more shredded (possibly due to the Ram and his fin clamping is even worse. I also noticed under his gills was lighter than usual and shone a light on it, where I saw some gold metallic glittering.

I've ordered some almond leaves and aquarium salt (though it will take a few days to arrive) and I'm thinking about getting some cupramine. Is this actually velvet? He's still very active and has a big appetite. If it is, how long does he have? and is the treatment I've chosen good?

Sorry for the essay of a post, I just didn't want to miss anything. I really love the little guy and I would hate anything to happen to him. 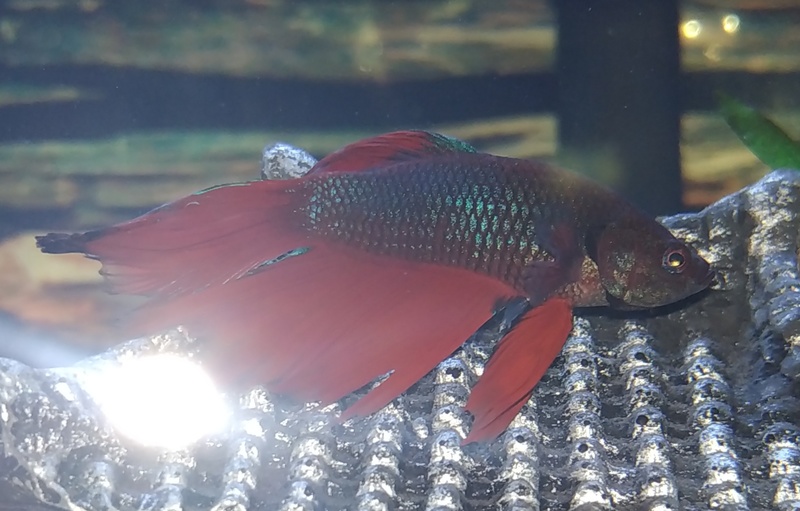 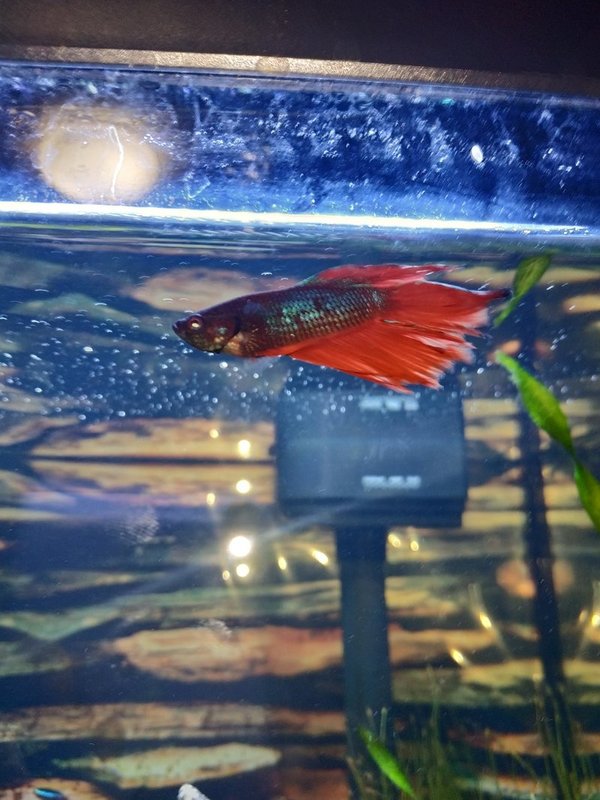 This is what he looked like when I first got him.

Velvet / Oodinium is a quick killer. Your Betta & tank mates would have been completely covered in the gold dust parasites by now & probably dead, if the problem was truly Velvet. I've read numerous Betta keepers reports noting disasterous results to their fish after dosing Melafix.
I wouldn't nuke the tank with copper at this point, just concentrate on keeping the tank clean & upping the WC volume to 50%.
OP

If it's not velvet, do you have any idea what that gold is then? it's pretty minimal on the side I managed to get a clear picture on, but the side the blurry picture shows is pretty bad - even a bit on his fins. He used to be a very dark almost black red on his body, but now it's a lighter and more dull red, coupled with that metallic gold. Considering last time he paled was when he had temp shock and almost died, I'm pretty stressed seeing him start to pale again. At least he isn't acting lethargic.

Also the clamped fins worry me, even since he started developing them on his tail I've been extra observant and rather than getting better, it's just spread to his dorsal fin. I have no idea what's causing it. I'm thinking I might still add some salt and almond leaves (even just to heal his torn fins a bit).

Velvet is a potential tank killer. Once it takes hold, fish start to drop within a few days of exposure. I suspect the gold specks you described are just color pigments. I'm not a Betta keeper and not familar with the color transformations certain Bettas varieties can go through, but maybe the fading your Betta is exhibiting is genetic. As long as your Betta is eating and otherwise acting normally, probably no worries.
OP

Well, it's gotten worse over the last day - as has his clamping. I talked to a friend of mine who is very experienced in the hobby and he says it's definitely velvet. I gave him a salt bath and I'm going to start using cupramine tomorrow as from what I can tell, it's slightly gentler on fish. I hope he gets better :/
Share:
Facebook Twitter Reddit Pinterest WhatsApp Email Link