Ok so I have a rimless custom built 27 gal tank. Hood and stand also custom built. I live in the Caribbean where there are only 2 seasons, hot as balls and hot as balls being fondled by satan. I have built a custom solution that works fairly well at cooling the tank water and the lights that I wanted to share, first some background (feel free to skip to the build if you just want to see that).

I should also mention that I from time to time build custom gaming computers so had some of this stuff around and I am more familiar with it than some I guess.

I live in an apartment with a concrete roof that doubles as a roof deck. I also am out a lot so the place is often shut up. Between that and the lighting for my tank I was having an issue with temperature.

Basically, my tank was heating up in the day when the place was shut up and then at night it would cool a few degrees but never all the way back down, so that when the day heated up the next day and the heat went up it had a cumulative effect. My job (as a pilot) takes me away from home a lot and sometimes I'm gone for 3 days returning home usually mid day on day 3. I have come home and found that the cumulative heating effect had raised the temps to 34 degrees C (93F for the americans). I'm single so no one around to keep the windows open when I am gone and the tropics are prone to sudden torrential downfalls so leaving windows open is a bad idea. I tried it once and came back to a literal 2 inches of water in my living room and kitchen.

So I came up with the following;
I mounted 3x 120 mm computer type fans in the hood. In a manner where using ducted airflow I pull the air first over the tank, then up over the lights and out the top.

Equipment:
3 NF-F12 iPPC 3000 PWM Fans - running off 12V DC, moving 110 CFM each.
1 Molex Adapter - to provide 12V DC power (these fans are normally powered by a motherboard)
1 Noctua NA-FC1 4-pin PWM Fan Controller - This allows me to control the speed of the fans if I wish
1. Molex to sata cross over cable - to connect the molex to the sata power cable that came with the fan controller.
1. INK BIRD IBS-TH1 minI - To do temp control function

Couple things here, the fans are PWM which means you can control the speed. For now I am using a analogue controller and will set them manually in the long term I want to integrate a rasberry pI to handle temperature controlled switching and fan throttling as well as some other aquarium related features.

The fans are also, low voltage and safe around water. you can dunk pc fans in water and they will run under water without electrocuting you or your fish (disclaimer don't try it just take my word or google YouTube if you want to see but I'm not responsible if you manage to electrocute your self).

These fans also come with rubber mounting to reduce vibration noise. The models I used are industrial models designed to be water/humidity/moisture proof.

The molex adapter is just to provide 12 V dc power since these are normally powered by a computer. The fan controller is for manual throttling.

The inkbird is your standard aquarium temp controller for power with water proof probe. Just plug the molex adapter into the outlet marked cooling set your ranges and you are gtg. Place probe in tank (obviously).

Here is my install: 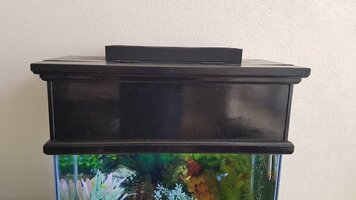 So I made a box to hold the fans as one assembly with a hole for the cords. 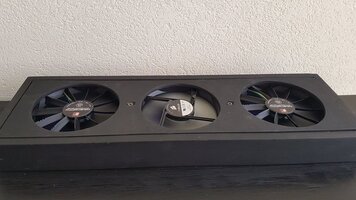 From the top. Just a plain square cut out into the hood though. 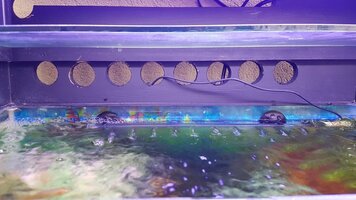 Inside my hood I have a glass pane that sits below my lights to provide splash protection and to catch the lights if the mounting wire holding it up breaks. BELOW that glass plane but well above the water (in case of jumpers) I drilled 6 holes. These holes will allow airflow IN.

Then I taped up the access holes and original ventilation slit ABOVE the glass pane (directly next to the lights) and made that air tight. 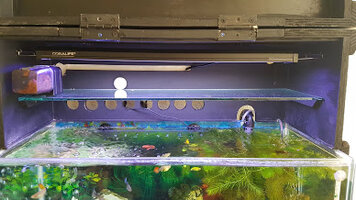 The only means of air entering the hood now is the 6 holes I drilled and the cut out for my filter return. 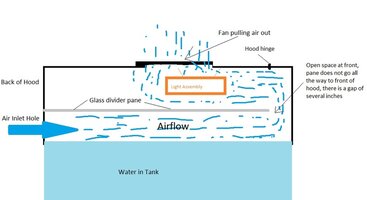 The hood is sealed except for the intakes placed at the back of the hood. When the fans kick in and start pushing air out the only way for new air to be taken in is via the inlet holes. The air coming in cannot travel the shortest distance (straight line) from intake to outflow. Instead by having the pane of glass in place the air is forced to travel along the surface of the water around the front, over the lights and then out through the fan. The volume of air being moved means that even though the intakes are not say a few mm or inches above the water the evaporation cooling effect is still achieved. 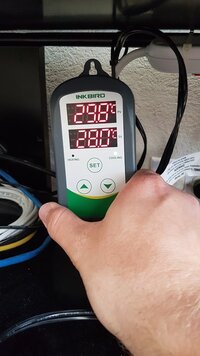 The inkbird controller (shown there when I first set it up) is what controls the on/off status of the fans. When the temperature of the water reaches 0.5 Celcius above the value I set. It turns on power to the fans. The fans do their thing.

The whole setup is fairly quiet with the fans running at max. There are lower power versions of these fans. These run at 3000 rpm max but there are 2000 and 1500 rpm versions of the fans which are quieter. However, the fan controller that I used will allow manual throttling of the fans if sound is a concern.

I am also investigating the viability of using non industrial (not specifically water proff) fans. If non industrial fans will stand up which I think they will, then I am thinking of swapping out these fans for different fans. There are many types of 120mm PC fans available and the advantage of using these fans is that they are all standard in terms of sizing and mounting and they are low power. 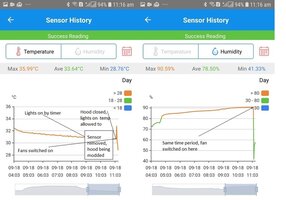 I have a little movable sensor that reports via bluetooth which I placed in the hood near the lights. Ambient temperature was about between 30 - 31 degrees C in the living room as I had just come home from a 3 day trip and I purposely did not open up to cool down the living room because I wanted to run this test.

The fans rapidly cooled the area of the hood around the lights. Tank temperature declined over time there after (keep in mind it takes much longer to cool such a volume of water).

I do not have a data logger continuously logging tank temp but I am happy with the results so far as I have been spot checking it and the tank is usually at or close to my set temp even when the ambient room temperature is higher (keep in mind the controller allows 0.5 C rise in temp before kicking on the fans). Infact as of writing this post my tank temp is 3.4 degrees C (6.12 F ) below ambient room temp (since I left the living room shut up so far for the day).

To be clear that is based on how I have the temp controller set. Its maintaining set temperature I have not tried to see the minimum temperature achievable.

My plan is to integrate a rasberry pI into the setup later to moniter tank parameters and make them remotely accessible via smartphone etc but also to provide more granular control. For example, I would like to run the fans at say 1/3 speed which is basically silent in order to provide a baseline of airflow over the lights and then IF the tank temperature starts to rise THEN kick on the fans at max. Also, it might be possible to have a maintenance mode where once a tank temp is achieved the fans run at the minimum to keep that exact temp rather than waiting on a set margin of increase then coming on at max until shut off. 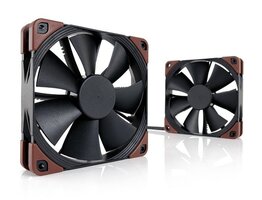 Thank you for sharing! Very innovative!

Jul 24, 2018
Goldfishfreak
Aquarium fan for cooling off the tank