I've just got the 90 gallon running - established media & 10-15% of the water came out of my established system (2+yrs old). It'll be a Discus based biotope - I've used pool filter sand as the substrate and got various drift wood flipped on its top. I'll post some pictures soon.

Anyways, before I keep talking irrelevantly, my question is if anyone has every kept Discus with Angelfish and how that went? I have owned virtually every fish successfully in the freshwater (just got into saltwater for about a year now), except Discus believe it or not. I had two Discus for a very short time because a friend of mine had to get rid of them. They weren't suited to the tank at the time & I knew my LFS would take them in so they had been in my tank for a short while.

Other than their compatibility, I've tried the rummynose/cardinal thing many times with Angels and Rams/Geos as well in two separate setups. I wanted something different. The only fish I haven't owned which seem so interesting & love how they school is tiger barbs. I know right away that they've been known to nip and disrupt peaceful fish like the Discus, but in a 90 gallon tank would it be that bad? I'm finding it difficult to believe how incredibly sensitive Discus fish are.

Has anyone tried and tested in a similar sized tank?
david1978
I had a dozen tiger barbs in a 55 gallon and they were absolute terrors. They were one of the few fish I could never find appropriate tanks mates for, either they were too aggressive or the other fish was. The closest match I came up with for them were convicts, but there was too much aggression from both for my liking. Never had discus so I'm not sure how sensitive they are.
Harvster10
I’ve never kept discus but I know that in the wild angelfish and discus live alongside each other, but if you do get angelfish it narrows down a lot of your shoaling fish possibilities as they can eat smaller fish like cardinal tetras. Just stay away from barbs as they are a bit nippy. Goes would be okay, but they are better off in a species only as they are quite aggressive within their groups. I would recommend about 4-6 discus, 5-6 angelfish, some bottom dwellers( maybe corys or a fancy pleco), and some large shoaling fish.
Smalltownfishfriend
75g Discus Tank
Mike1995
discus really are best kept mainly with other discus. I've seen different people having plecos and small schooling fish with them. But otherwise nothing else. The way I look at it, discus are really expensive fish and if it were me buying them, I'd never put something with them that might cause aggressive behavior or anything that might injure/disturb them. Angel fish can be quick eaters and sometimes aggresive amongst each other. Both of these may lead to problems if they're with discus.
75g Discus Tank
GBRs

BN Plecos - NO, just no. and I know many are going to say I have had Bn plecos with my Discus with no problems. yeah, I kept them successfully with Discus til they became unsuccessful. the "rumor" being they will attach to the sides of Discus for their slime coat. I can testify this is not a rumor as I personally witnessed my BN pleco sucking the side of my Discus. up to you but I would stay clear.

german blue rams are a great choice for Discus

I have no experience with Geo's so can't say either way.

tetras of Choice for me are cardinals or rummies

Angelfish - this has been tried often with success and disappointment.
as already mentioned, they coexist in the wild, they key to that is the wild is so much more than a 90gl tank.
I think it all comes down to the temperament of each individual fish.
I kept Angelfish (about 7) before keeping Discus. the aggressiveness I seen with the angels together
convinced me not to put them together.
fjh
I keep discus and angelfish together. The only time I have an issue is then the angelfish defend their eggs and chase the other fish away - otherwise they get along great.

DO NOT do discus and tiger barbs... that is a disaster waiting to happen. Discus are very peaceful fish and the tiger barbs will tear them to shreds.

To be honest, I haven't found discus to be overly sensitive. they are actually the only species ive had that has never gotten sick. Granted, all my discus were born and raised in hobbyists' aquariums and not on a fish farm so their genes are probably a lot better. I even have SUPER hard water here which discus don't like, and theyre doing fine.
toy4x
Listen to Disc61... he knows his discus!

I have been able to keep Discus and Angel's together. My black veiled never bothered anyone, the koi angel had started to get territorial...so took both of them out and gave them to a worker at petco. Didn't want to take any chances.

My BN doesn't bug my discus either, not saying it will never happen.. but it hasn't so far.

I also have rummies, cards, and sterbaI Cory's. 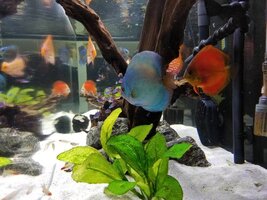 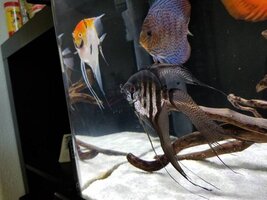 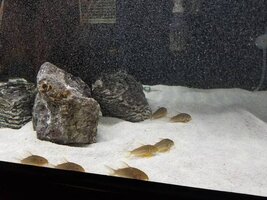 Jun 9, 2022
Noroomforshoe
Am I An Expectant Parent?