Kysarkel000
Did my pleco eat my shrimp? I had 8 ghost shrimp for about a month. I went on vacation for a week and came back to zero shrimp. It was like they weren't even there! I feel like my baby BN pleco ate them, but he seems pretty small to eat 8 full sized shrimp... What do you think? (It's hard to tell, but you can compare his size to the plant roots) 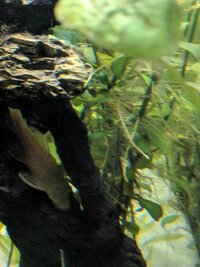 FlipFlopFishFlake
Is there any other tankmates? Are you sure they are not hiding?
Kysarkel000

Is there any other tankmates? Are you sure they are not hiding?
Click to expand...

I have a betta sorority and pygmy corydora school in the same tank. I haven't seen them in a few weeks. I've added plants and did a few water changes, and have not seen them. I'm pretty sure there's none left..
75g Discus Tank
My guess would be hiding.

Is there a lid on the tank? You may have had some jumpers.
FlipFlopFishFlake
If anything in that tank ate the shrimp, it would be the bettas. Plecos are generally safe with even baby neocaridina shrimp. Perhaps the bettas got hungry when you were gone and ate them? Is there anywhere they could escape?
Rtessy
What's your filter intake like? Sometimes smaller shrimp can get sucked up if there's not a prefilter sponge.
Other than that, I would look at the bettas even if they coexisted just fine before. I once kept a cherry shrimp with a betta, and they would both be active and going around just an inch or so away from each other, and the betta didn't mind. Or at least, he didn't seem to. Three weeks later I saw the betta eat the shrimp, and let me tell you, that was quite a shock
tjander
Maybe that’s why they call them ghost shrimp. . Sorry I could not resist the shot.
Seriously, Sorry about the potential loss of your shrimp. I too would suspect the Betta over the pelco.
Robjoco
I tried adding some GS with my young female “baby” betta yesterday. She immediately started going after the GS! I rescued them and put in a different tank.
Kysarkel000
Huh, interesting! I thought my pleco would've been the culprit over the bettas... The shrimp were quite large Imo... Too large to be sucked up by the filters I have. I have a good hood on my tank, so they couldn't have jumped out.