It's taken me a little while to process this, but I feel like now I can post about it for some final closure.

Early this month, my family, my boyfriend and I went on vacation for a week. Since I live with my boyfriend's family, we left his older brother responsible for feeding our gerbils and hamsters. I did not tell him to do anything specific for the fish. I intended to tell him specifically NOT to do anything with them, but then our flight time was moved 12 hours earlier and we had to rush to pack and get out the door.

When I came back home, Denali, my betta in the 10 gallon, was nowhere to be seen - it took quite a bit of exploring the depths of the heavily planted tank before I found him. All that was left was a skeleton with some pale flesh hanging off. The other fish in the tank - CPDs - were fine and all accounted for. The tank and heater were still running, temperature normal, and the lights were on their automatic timer and working as usual, so I knew there was no equipment malfunction. I know he did not starve to death, as I have gone away for a week at a time multiple times before without feeding anyone and have never had a death, and from seeing what was left, I am certain he died some time in the first couple days after I left. In general, he was totally fine and happy and active the day I left.

I have brought myself to the conclusion that my boyfriend's brother took it upon himself to feed the fish without me asking him to, and fed them way more than normal. Bettas, of course being susceptible to bloat, would not have fared well if fed to the point of literally bursting, whereas the CPDs just pick through whatever falls into the moss and are not susceptible. The other tanks I have were tucked away in the bottom cabinet of the stand and did not have automatic lights on, so he probably did not notice them or was not compelled to feed them.

I have no one but myself to blame for this - I should have told him not to feed the fish. I still have three of Denali's fry that are over a year old now. After I removed his body, I introduced his two female fry into the 10 gallon to take his spot. I do understand this would be viewed as a very risky sorority situation, but in the past few weeks since I moved them in together, they've been swimming around side-by-side as inseparable sisters. The male fry still has his tank to himself and is just as lively and attention-seeking as ever, just like his father.

DenalI - I'm hoping you were happy in the past year and a half we spent together. I'm grateful I was able to witness your beautiful color transformation from dotted with snow-white scales to shimmering sky blue scales. I'm sorry my negligence led to your premature death. I was looking forward to spending much more time with you than this.

First photo below is from the day I brought him home, and second photo is from right before I left. 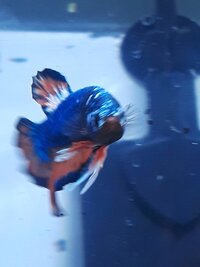 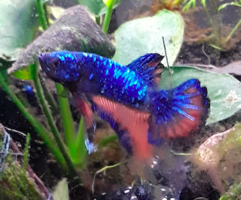 So sorry for your loss!

I am so so sorry.