I just started cycling my tank. never really saw a major spike in the ammonia. I was using shrimp to feed the bacteria. the ammonia level has dropped down to 0 but I have seen a increase in Nitrate and Nitrates. just never thought it would get as high as my test results. but not taking much stock in to what they actually are since i'm using API. I bought 2 the master kit and then the strips. It took me several weeks to decide upon what tank and where to go. I went to a LFS privately owned. they hit me with an outragious number just for a 60 gallon tank. A marineland 60 gallon. with the stand 800.00. so I went to petsmart and bought the exact same tank and stand combo for 250. I decided at that point that maybe that local aquarium shop was just not a place to buy from. but the rest of my specs as follow.
60gallon tank
2 200 w heaters
hob filter
oxygen pump
powerhead
and just bought a circulation pump 950 aqueon
40 lbs dry rock
10 lbs live rock
40 lbs of live sand

ph 8.0
Ammonia - 0
NO2 - 10
NO3-160
those are my levels so far. i'm planning on hitting my LFS this saturday to have them dbl. check my NO2 and NO3. since i'm using API tests. it might not be right. but if it is then not sure what to do to get it those levels down other than a 50% water change. this is an older picture. but I just added
the circulation pump today. 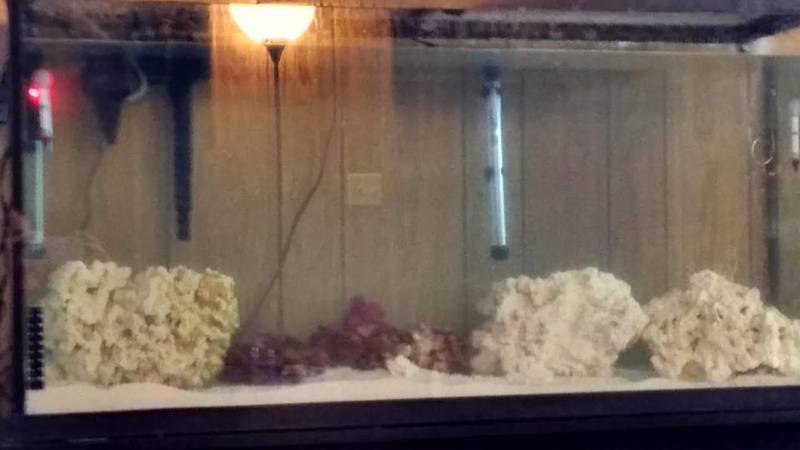 You're right, the only thing that will lower your nitrites & nitrates are water changes. I'd suggest that you get on that soon, as nitrites over 5ppm or nitrates over 100ppm can significantly slow, or even stall a cycle. The problem with API is its inability to accurately read parameters in the low range. This means API tests work out quite nicely for cycling a tank, but the nitrate test isn't great afterward as you'll probably want an accurate reading below 10ppm. So, what I'm trying to say is that I would trust your results, and even if they are slightly inaccurate, I'd say that your parameters are still very high. I would do water changes today to get those numbers down.

Jesterrace said:
I would hold off on the water changes and let it do it's thing as you still have nitrites present and then wait until your nitrates drop a bit and then do the water change. Water changes mid cycle are seldom beneficial (and can actually restart the process).
Click to expand...

Sorry Jesterrace but I disagree. I've cycled tanks 8 times in the last year, and have 2 cycling now. I do water changes mid-cycle whenever nitrites are over 4ppm or nitrates are over 100ppm. Doing it this way, the cycling process doesn't take longer than expected, which is usually about a month. Of course, I couldn't say that your way is wrong either, because I've never tried it.

My experience has been that leaving it alone gives the best results. I did it with my 36 gallon as well as the additional 50lbs of live rock that I added to my 90 gallon. I don't know if it makes a difference but both the original 40lbs that I transferred from my 36 gallon and the 50lbs that I transferred from cycling in a garbage can both maintained their cycle through the transfers. I tested regularly in both cases to check for signs and I never had a single problem with it.
Share:
Facebook Twitter Reddit Pinterest WhatsApp Email Link